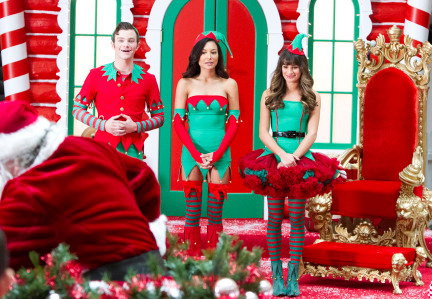 Glee returns tonight with an all new episode entitled “Previously Unaired Christmas.” If you missed last week’s episode, don’t worry your little Gleek hearts, because we recapped the episode for you RIGHT HERE. Glee season 5 episode 8 will open up with Sue Sylvester telling the audience that tonight’s episode was a Christmas special that FOX did not air last year, hence the title, “Previously Unaired Christmas.” But if you thought tonight was going to be all about the past holiday adventures of Glee Club, you’re so wrong. We’ll also be getting a glimpse of Rachel, Kurt, and Santana’s adventures in NYC — where they’re currently working as Santa’s elves! How precious.

Here’s the full synopsis for Glee season 5 episode 8 “Previously Unaired Christmas”: Sue Sylvester introduces the episode as a Christmas special that FOX did not allow to air from last year. The members of New Directions audition for roles in McKinley’s living Nativity Scene. Meanwhile in New York, Rachel, Kurt and Santana work as Santa’s elves at a mall in the all-new “Previously Unaired Christmas” episode of GLEE airing on Thursday, Dec. 5 (9:00-10:00 PM ET/PT) on FOX.

Sue is putting coal into stockings talking about a how a controversial episode of Glee was made for last Christmas was supposed to air, it never aired but now it will and it has scenes cut out. It cuts to Will talking about Christmas, Tina and Sam talk about how they want to win this year and Tina takes it a little over board on the winning part. Blaine starts to sing Joy to the World, but everyone shuts him up. Arty who’s part of the Christmas club, they mention how Finnigan had swastikas and other things put down the chimney. The Glee club will be doing a play and the Glee club fight for roles in the play. Santana gets Kurt a trip to the Dildo Islands, she wants Kurt to enjoy himself. Kurt asks if the gifts are all for him, of course they’re not Santana explains to him who the gifts are for. Santana tells Kurt she wants to spend her college funds on a hotel in NYC, Rachel arrives and sees that Santana is here. Rachel says that she got the greatest gig for her and Kurt and that Satan can join them to as elves at Santa’s workshop in the mall. Santana and Kurt are agree to do it and Rachel says she’s going to be the best Jewish elf ever. Sam and Tina are talking about the upcoming Christmas tree contest, Sam is going to be getting the balloons, pine cones and more for the entire thing. Becky stops Sam and Tina in the hallway and says that they need to kiss her because she has a mistletoe hanging off her hat, Sue finds Becky and tells her it’ not a mistletoe. Sue tells Sam and Tina she has been treating Becky different, Sam says she needs to be treated for some sex addiction. Sue says that she’s going to be the judge for the Christmas Tree contest, she mentions how she can’t wait for judging the Glee club’s Christmas tree. It cuts to Kurt, Rachel and Santana as elves waiting for Santa, the kids keep saying they want Santa. Santa arrives and is stunned by Santana and Rachel’s elf costumes, Santa tell Kurt to never look at him in the yes ever again. Santa tells Kurt to keep the kids busy while he goes to the washroom, Santana says that the kids are about to get freak out. Kurt, Santana and Rachel become Here Comes Santa Claus to distract and entertain the kids. One of the kids say they sucked eggs and things are thrown at Kurt, Rachel and Santana.

Marley tries saying that the girls in the Glee Club should try to audition for the virgin Mary, it then cuts to Santana in a bath who’s taking a break from being a “slutty elf” Kurt and Rachel call needing Santana to come back as Mrs. Claus. The entire Glee Club are singing Rockin’ Around the Christmas Tree by Brenda Lee. While singing the song, the Glee Club is also putting together their Christmas Tree for the Christmas Tree contest. The kids are still freaking out at the mall wanting to see Santa, Kurt comes out saying that Santa is gone due to some problems; now Mrs. Claus will be taking Santa’s place to say who’s naught or nice. Santana appears as Mrs. Claus and the kids freak out. Santana is having kids sit on her lap, while she’s listening to what kids want for Christmas. Santana is being a little too realistic with the kids, telling them things that they really shouldn’t know and also insulting a couple of them. The Glee Club start humming Oh Christmas Tree as Sue walks in to judge their Christmas Tree. Sue is giving a thorough inspection of the Christmas Tree, she asks Sam and Tina an ornament and they explain it perfectly. Sue says that she won’t be announcing the winner until tomorrow for the Christmas Tree contest, for once she says that the Glee Club has managed to not screw up like usual.

Will is going to help Artie and Finnigan with judging the girls who want to become the Virgin Mary’s in the play. Tina, Marley and Wade are auditioning. singing Mary’s Little Boy Child by All 4 One. The judges applause and ask if there any last minute auditions for the Virgin Mary and Kitty stands up. Kurt, Rachel and Santana are in a problem, a good looking and shredded Santa appears to help them out but wants to take them out to dinner. Sue announces that the Glee club won the Christmas Tree contest, Becky gets mad and breaks trophy. Will and Finnigan put their decisions for the virgin Mary and it seems that Marley won the role, Kitty congratulates Marley. Marley knows that Kitty wants the role, though it seems that Kitty doesn’t believe she deserves to play as Virgin Mary. Kurt is getting dinner ready, while Rachel is putting ornaments on a tree. The shredded and good looking Santa arrives at their door.

Handsome Santa says that this place is incredible, that for struggling actors their apartment is great. Santana asks what he does, he says he does parties, he asks if they do request and brings out helium and balloons for them to sing. Kurt, Santana and Rachel take some helium and sing Christmas Don’t Be Late by Alvin and the Chipmunks. The handsome Santa is looking at things around their apartment while their singing, making it seem he has ulterior motives. Tina is happy to have won the angel and is talking to Sam about it, Becky gives the two of them a Christmas present her baby teeth in a small bottle. Sam says he’s sorry for her not winning the Christmas Tree contest, Becky says that she feels that they’re losers and says happy holidays walking off. Rachel is sitting with Santana and telling her to move here in New York, that it’ll be a hole lot of fun. They’re looking for Kurt, they find him and handsome Santa kissing on a table top. Santana is impressed, Kurt is trying to live it up a bit. They decide to drink up some eggnog, but that Santa does have ulterior motives because he doesn’t take a sip from his.

Rachel wakes up after having a crazy night, she looks like she has a hangover, she wakes up Santana who doesn’t look any better. They;re both not in great shape and many things have been stolen from their apartment, they then find Kurt who’s tied up with antlers on a bed. The Santa turns out he only showed up to rob them all, Marley says that Kitty was saying she wasn’t worth of Virgin Mary. Sam decided to give the angel to Becky to make her feel better, Will is having everyone get in place for their performance. Marley isn’t dressed as Virgin Mary. Marley, Tina and Wade being to sing Love Child by Diana Ross & The Supremes, during the entire performance Kitty doesn’t look like she’s pleased with it. Kitty says that was the most horrifying thing she’s seen and wants them to do it the right way, that she’ll play the Virgin Mary.

Becky is staring off in the distance, Sam and Tina show up and ask her if she heard the news; they says that Becky won the contest and she deserves the angel, they also ask her if she would like a role in their production. Kurt says he feels ashamed after this, he tells Santana that she can’t say anything about it to anyone. Rachel comes in and says that the Santa that stole everything from them Cody, stole more than their things. The Glee club are outside getting ready to perform, Becky arrives as the baby and Kitty comes in as Virgin Mary. The Glee Club begin to sing Away In A Manger by Martina McBride.