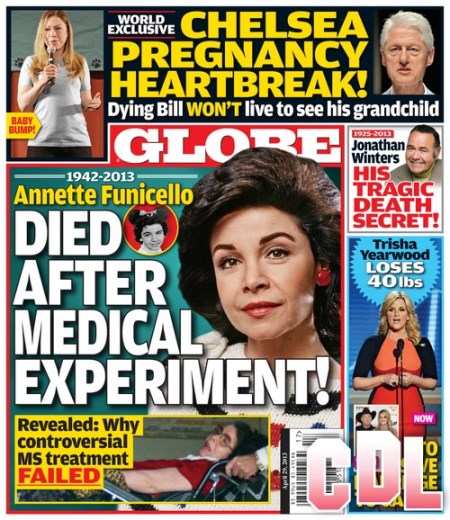 It has been a really sad week for Old Hollywood fans as they have been mourning the loss of Annette Funicello, an original Disney Musketeer and the star of a bunch of 60’s flicks, such as Beach Blanket Bingo. The 70-year old suffered from MS and had reportedly been in a coma for years before finally passing. According to the April 29th print edition of GLOBE, Annette died after some sort of experimental MS treatment, designed to try and improve the quality of her life, ultimately failed.

Also passing away this past week was Jonathan Winters, a noted long time comedian. He had his own show and eventually became a regular fixture on Johnny Carson’s show. Winter’s popped up in sitcoms and his quotes will live on forever. He was married for 60 years until his wife Eileen died in 2009. According to the new issue of GLOBE that is out now, Winter’s died with a secret, like most everyone else in Hollywood it seems!

Have you caught a glimpse of Trisha Yearwood lately? Well, according to the GLOBE she has dropped at least 40 pounds in order to hang on to her husband, the one and only Garth Brooks. I guess Trisha realized it was time to spice things up and pull herself together before other (read that as younger and hotter) women started to be a little too appealing to Garth!

Is Chelsea Clinton pregnant? It wouldn’t be too surprising since she has been married for a few years now and her career is obviously right on tract. Sources at GLOBE say that Chelsea is indeed sporting a baby bump but sources fear that her rumored to be dying father, Bill Clinton may not be around long enough to meet his first grandchild!

This is just a quick glimpse into what you’ll find when you grab the April 29th print edition of GLOBE. As usual GLOBE is doing a stellar job of giving you your Hollywood fix and not overlooking today’s hottest celebs! It’s also one of the few weeklies that dares to dip its toe into the political realm at all! GLOBE hits newsstands now so make sure you grab yourself a copy