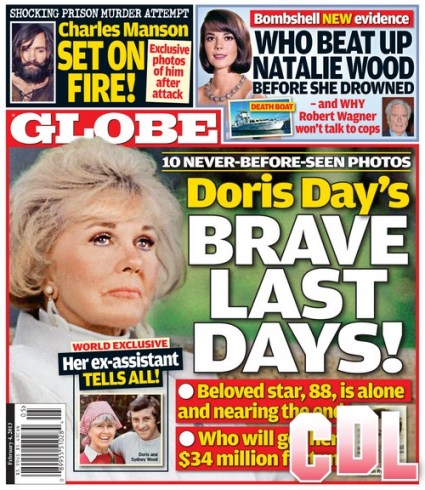 Movie legend and singer, Doris Day is nearing the end of her days.  Will her family be by her side or will she suffer alone?  Known for her roles in Pillow Talk and Calamity Jane, the actress and songstress has accumulated a vast estate, but who will it all go to?  Will her grandson, Ryan Melcher, get her $34 million fortune?  Her ex-assistant dishes out all the gossip and shares 10 never before seen photos of the ailing celeb in this week’s edition of GLOBE.

Also in this February 4th print edition of GLOBE we learn if prisoners attempted to murder Charles Manson.  The criminal / quasi-cult leader was set on fire while behind bars recently. Manson was and is known as the mastermind behind the mass murders whose victims included Roman Polanski’s pregnant wife, Sharon Tate.  He has been denied parole at every turn and last year admitted “I am a very dangerous man,” to the parole board.  Who was behind it all?  Was it the prisoners or the guards?  See exclusive photos of Manson after the attack and attempt on his life.

The case into Natalie Wood’s death has been re-opened.  After the initial finding several years ago of an accidental drowning, the case was re-opened when new evidence came out to suggest that the actress may have been murdered.  Most recently it was announced that bruising was found on her arms.  Were these defensive wounds?  Who are the prime suspects?  On the boat with Wood was her husband, famed actor Robert Wagner, and their close friend Christopher Walken.  Thought the two deny having anything to do with her death, speculation seems to lean their way.  Neither have much to say, but why won’t her husband, Wagner, talk to cops?  How long will he refuse to revisit the tragedy?

Look for all this and more in this week’s edition of GLOBE.  With GLOBE on the Natalie Wood case I am sure that there will be details that have so far been unavailable elsewhere.  My weekly GLOBE reading experience is thrilling and informative.  When I sit down with my copy of GLOBE the world opens up for me as I am treated to inside access to the most intriguing current stories.