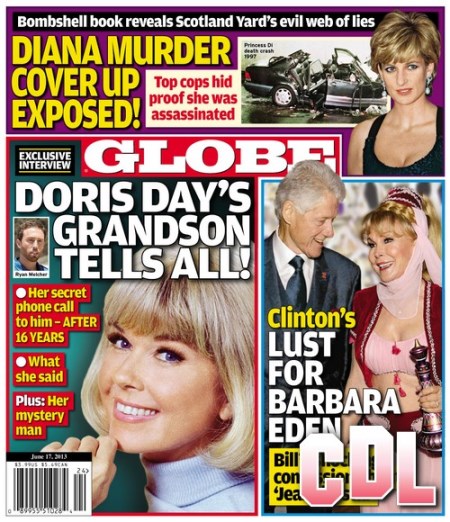 It has been a little while since conspiracy theories have floated around about the untimely death of Princess Diana but this week they seem to have returned with a vengeance! A new book by investigative writer, John Morgan is out this week and it is alleging that Scotland Yard helped to cover up the murder of Princess Diana. Luckily, the June 17th print edition of GLOBE has all sorts of behind the scenes information for readers to really dig their teeth into.

In Diana Inquest: Corruption at Scotland Yard, Morgan reveals that police commissioners Lord Paul Condon and Lord John Stevens committed perjury at the 2008 London inquest into the deaths. Morgan shows that Condon and his former assistant Sir David Veness fabricated documentation to support the false inquest testimony of Condon, Stevens and Veness. In other words, it is believed that Diana did not die in some sort of hellacious accident, but was instead murdered by someone on the inside and then it was all covered up so that the truth would never come out, at least until now.

No other magazine covers the royal family as extensively as does the GLOBE, so it makes absolutely perfect sense that GLOBE has the scoop on the revelations within the pages of this book before anyone else does.

We all have a secret crush now and then and so do celebrities and other power players. The June 17th print edition of GLOBE is dishing on which Hollywood star had Bill Clinton all hot and bothered and you’ll never guess who it was – Barbra Eden in her I Dream of Jeanie era! I would have never guessed that, would you?

GLOBE is also the weekly authority on Classsic Hollywood, bringing readers brand new information on their old favorites. This week Doris Day takes the spotlight because her grandson, Ryan Melcher, has decided to reveal details from her private life that you’re not going to find anywhere else. It’s time to hit up your local newsstand and purchase the June 17th issue of GLOBE. As usual, you’ll be glad that you did!

f you want GLOBE delivered to your door each week, you can subscribe HERE!