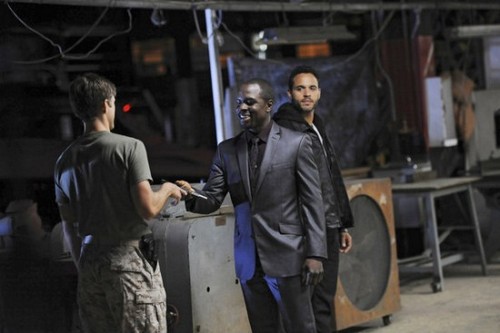 GRACELAND continues tonight on the USA Network with a new episode called, “Heat Run.” On this week’s show Charlie gets into some hot water when her C.I. proves unreliable during a dangerous drug deal. Did you watch last week’s season premiere? We did and we recapped it here for you.

On last week’s episode Mike discovered that life undercover brought with it some moral question, as he and Briggs tried to incite rival gangs to target each other.

On tonight’s show Briggs calls on the house to help Lauren with her case against the Russian Mafia and Charlie gets into some hot water when her C.I. proves unreliable during a dangerous drug deal.

I cannot wait for tonight’s episode 3 of Graceland last week’s episode 2 was fantastic.  The show airs tonight on USA Network at 10PM EST and we will be covering it with all the details.  So make sure to bookmark this spot, and come back for our live coverage of Graceland Season 1 episode 3 right here.  Enjoy the show folks!  While you wait for the recap, check out the sneak peek of tonight’s episode below!

Where we last left them Briggs had pulled a gun on Mike demanding who he’s been speaking to. Mike tells him no one. Briggs stops him from getting his gun when there are interrupted by Bello himself. Bello wanted to know why Briggs pulled gun on his friend. Both Briggs and Mike are playing the part of a suspicious friend who wants to know who set up Bello’s men to get jacked the other day. Lucky for them Bello believes the duo and begins to suspect his own man.

Bello returns Mike’s gun to him and the let the guys go. Briggs is jubilant that they got away with it whereas Mike is still shaken from having a gun pulled on him. Briggs manages to make him feel better but it doesn’t stop Briggs from asking what Mike would have said if he kept asking who he was talking too. Mike says he was making it up as he was going along.

Back at Graceland, congratulatory drinks are going around. The only ones not participating are Lauren and Briggs. Lauren still wants her partner back.  She tells Briggs about her Russian mafia guys. Apparently something big is going and Briggs, now curious, wants to help.

Briggs demands all of the FBI guys, so of course DJ and Paige leave, before he tells them a plan to nab some mobsters. Johnny decides to catch up on some sleep for their big day soon.

Mike meets with Juan. He wants to know some specifics on why he is investigating Briggs.  He doesn’t get much but Juan does tell him to fill out reports more. How? Mike has to write a report on his roommate in their house. Juan tells him to try Starbucks.

Charlie meets with one of her C.I. The guy is twitchy but he swears he has good information for Charlie. She agrees to his plan however she ignores his attempt at getting more money. Rather than focus on that she tells him to be good and just accept his twenty percent.

The big bust doesn’t go as planned. Briggs tries to abort it but Lauren takes matter into her own hands and exposes herself in full D.E.A regalia. She thought she had the mob guys on fencing Lamborghinis instead it was an empty truck. They can’t even hold the truck driver so essentially her cover is blown.

Johnny, DJ, Paige, and Mike are out for some beers. To take their mind of today they decide to teach Mike about dating while undercover.  Their making jokes and showing off their moves.

Lauren shows up back around her mafia friends. The truck driver nearly ctaches her but she’s safe. For now.

Mike isn’t having any luck with pickups.  Yet he does have help with his investigation on Briggs. He’s able to get Briggs’s credit card information, thanks to Briggs paying off his tab, by being crafty with his hand and phone.

Charlie and the C.I. are making an exchange.  The bust unfortunately goes against plan. Her friend tries to get the dealers to pay more so that he can get a bigger cut. The deal still goes down but Charlie is pissed.

Charlie returns to her guy. She has to tell him that they can’t work together anymore. She tries to convince to enter rehab but he doesn’t believe that will work. He doesn’t want to leave Charlie.

The bust on the cars is finally able to go down. There were more Russians than they thought so Johnny ended up injured nevertheless they were able to catch all culprits. Later Briggs wants a minute alone with the guy who beat up Lauren but he notices the guy’s hands are even bruised or discolored.

Everyone is supposed to celebrating. Lauren decided to skip it. Mike chats up a girl thanks to some help from Paige. Meanwhile Briggs loses his cool. Paige takes him back to the house to find out what’s going on.  Briggs wants to know why if the truck driver saw Lauren was she able to leave the warehouse alive and only with bruises. Paige plans on finding out.

Walking on the beach, Mike is still with the girl from last night. He’s happy with this girl and still smiling when he returns to the house. He wants to go to sleep but Paige tells him that have bigger things to discuss.  Mike and Paige create a diversion in order for her to check under a van. She finds out that mafia has been tracking Lauren.

Charlie found a house for her friend. She wants to give him a new beginning. All her friend has to do is give the realtor the money.

Lauren is upset. She’s getting kicked out of the house.  She’s blaming Paige and wants Briggs to go to bat for her. He’s not going to help her. Why? He’s mad. She never went to the warehouse and that’s why she didn’t know how many men were actually in the warehouse. She did all of this for her former partner Donnie. She used Briggs just to get Donnie in and Mike out. Briggs understands and yet he won’t fix this for her. He tries to get her to look on the bright side. Her career doesn’t have to be over.

Mike is checking Briggs’s credit charges. He tracks down one of Briggs charges and finds out that Briggs bought a GPS tracker. He goes to Briggs about how he “doubts” the Russians were ever on to Lauren. Briggs tells him Lauren just was too careless. In actuality Briggs knew from when he noticed no bruises on the mobster’s hand that Lauren was lying so he set her up to get kicked out of the house.