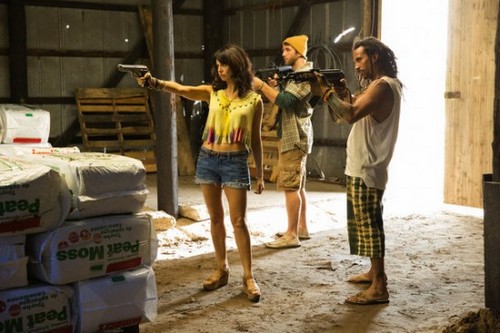 GRACELAND continues tonight on the USA Network with a new episode called, “Pizza Box.” On this week’s show Paige recruits Jakes and Tuturro to go undercover with a flirtatious and dangerous female pot farmer. Did you watch last week’s season premiere? We did and we recapped it here for you.

On last week’s Briggs called on the house to help Lauren with her case against the Russian Mafia and Charlie g0t into some hot water when her C.I. proved unreliable during a dangerous drug deal.

On tonight’s show despite Briggs’ hesitations, Mike gets recruited by a Nigerian drug lord to teach gang members how to shoot well, while Paige recruits Jakes and Tuturro to go undercover with a flirtatious and dangerous female pot farmer.

I cannot wait for tonight’s episode 4 of Graceland last week’s episode 2 was fantastic.  The show airs tonight on USA Network at 10PM EST and we will be covering it with all the details.  So make sure to bookmark this spot, and come back for our live coverage of Graceland Season 1 episode 4 right here.  Enjoy the show folks!  While you wait for the recap, check out the sneak peek of tonight’s episode below!

Paige is out on assignment making a deal with some drug dealers. At home, Charlie is telling the boys about her family’s recipe. It’s a good recipe and the guys are dying for some of the family’s sauce. Paige, on the other hand, is going over her newly bought drugs with her boss when she notices a discrepancy. It’s great quality but being sold cheaply.

Mike is getting texts when Johnny grabs the phone to read it. It’s Abby the girl Mike was interested in. However Mike believes they don’t date. An assumption Charlie quickly fixes. They can date, they just can’t get close. Briggs calls in Mike for a conference. There’s a meeting coming up with a heroin supplier, Bello.

Paige is going over the drugs with Charlie. Their still stumped so they bring in DJ for his opinion only for him to think the same as them with no new leads. They need someone to go in to infiltrate the drug business. Paige can’t do it, she can’t pass as Mexican but Johnny can.

Charlie is prepping Johnny for his undercover. She’s spray painting gang tattoos. Johnny thinks she should go for complete body work. She and DJ agree she’s stopping at the waist.

Briggs and Mike meet Bello and Bello’s one-eyed, thanks to Briggs, henchman. Bello wants to speak to Mike by himself this time. Bello starts off calmly until he gets to what he really wants. He wants Mike to train his men. Mike almost slips in his cover but makes a comeback in time with Bello even laughing it off.

Briggs is in the kitchen with a cooking Charlie. He’s worried and also frustrated that he wasn’t in on the meeting with Bello. Charlie tells him to get over it. If they can take down Bello then that’s all that matters.

DJ is taking Johnny to his contact, his crazy ex. The ex greets him warmly for a supposed ex. Johnny takes his cover a bit too well. HGH isn’t sure she wants to take a hot headed low level gangbanger on. Paige and DJ take him to task later for pushing it. DJ still got him in but barely.

Mike is going over Briggs’s files. He wants Briggs back on the case especially when Washington wants him to pretend to train Bello’s men. Briggs reassures him he’ll make a call. On the first day of training, Mike is shocked he’s actually training Americans instead of Nigerians. He continues but now has to make a hard sell otherwise known as procrastination of actual teaching. Bello agrees with his plan so Mike teaches the men how to disassemble the weapon first.
Johnny and DJ are heading to their meeting. Paige is with the reinforcements. Johnny and DJ are at dinner with her. She’s reminiscing instead of selling. Johnny is able to capture her attention with some mild flirtation. Paige, hearing all of this on her comm, realizes the lady isn’t going to be making a deal. Se tries to pull them out but Johnny decides to stay.

Mike calls Abby and asks her out. He hangs up and begins to head to his car when one of Bello’s men ambushes him. It’s the guy who lost his eye. He’s suspicious of Mike and demands to know who he really “is”? Fortunately, Mike is able to gain the upper hand and issues his own warning. Never do it again.

The same man gets pulled in by Charlie. She’s trying to convert him by offering witness protection. Either way Eddie can’t return to Bello’s side. He’s been missing too long. Mike doesn’t agree with the maneuver. He feels they’re painting a target on Eddie’s back but Briggs tells him that this is how it goes.

Johnny slept with the girl. He just didn’t remember his “tattoo” was actually henna. She sees ink on the sheets and gets her boys. Where does she find Johnny? He’s taking photos of her pot farm. DJ goes in to get him and ends up being taken hostage. Paige is the one that comes to their rescue. She’s outgun but Johnny is able to knock out the ex.

Charlie’s family sauce is finally ready. Mike gets a message from Bello before he can eat. Grabbing Briggs, he goes to his meeting. Bello has captured Eddie. Eddie tells Bello how the FEDs brought him in right after he confronted Mike. Bello doesn’t believe him yet he asks Mike straight out if he’s a fed. Mike says “No”. Bello gives each man a gun and steps away. Eddie, instead of shooting Mike, kills himself.

Mike continues to go on his date with Abby. She sees he’s shaken up and tells him to go home. Mike returns to the house but he isn’t ok. Briggs checks on him but Mike wants to be alone.

If Mike can’t handle witnessing a shooting how will he be able to continue fieldwork? Is this the end of the Briggs operation?