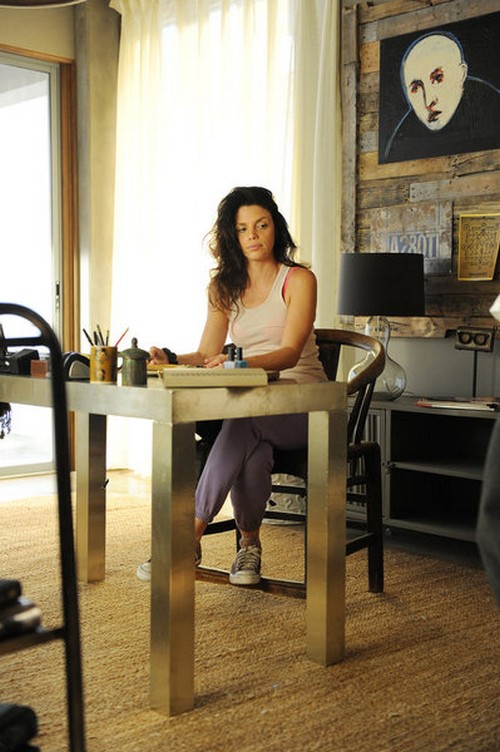 GRACELAND continues tonight on the USA Network with a new episode called, “Pizza Box.” On this week’s show Mike becomes more entrenched in Bello’s outfit. Did you watch last week’s season premiere? We did and we recapped it here for you.

On last week’s despite Briggs’ hesitations, Mike got recruited by a Nigerian drug lord to teach gang members how to shoot well, while Paige recruited Jakes and Tuturro to go undercover with a flirtatious and dangerous female pot farmer.

On tonight’s show while Mike gets deeper into Bello’s organization, Briggs and Charlie resume their former identities as a sexually-charged couple to get intel on a mysterious drug supplier called Odin.

I cannot wait for tonight’s episode 5 of Graceland last week’s episode 4 was fantastic.  The show airs tonight on USA Network at 10PM EST and we will be covering it with all the details.  So make sure to bookmark this spot, and come back for our live coverage of Graceland Season 1 episode 5 right here.  Enjoy the show folks!  While you wait for the recap, check out the sneak peek of tonight’s episode below!

Still Reeling from hkh’s death, Mike isn’t back to normal just yet. Johnny however manages to get him outside and start having fun. A small football game between the boys and Paige. Returning to the house he walks in on Charlie appearing to inject drugs. In actuality she’s practicing with Paul for a drug bust. He gets invited along for the bust but can’t go. He has to see his “therapist”.

At their meeting, Mike is unsure why the bureau is going after Paul. He hasn’t seen anything wrong but more importantly he doesn’t want to watch anyone die again. He wants to see the so called proof the bureau has on Paul and he wants it now.

Charlie and Paul at their sting operation. Everything was fine until Whister, Charlie’s fromer friend” comes into the drug den. In order for Whistler not to see them, Charlie begins a heated make-out session with Paul. It works and the moment Whistler is another the room the agents leave the scene.

Their make-out has much more impact than many know. It seems, and Johnny is helping it make it seem, is that a while ago Charlie and Paul used to be together. Paul doesn’t believe Whister would have snitched on them but Charlie is as sure as she was before. She did take Whistler off of the bureau’s dime because he couldn’t be trusted. While Paul is comforting her, Johnny and Paige notice the tension between them. The two make a bet on whether and when Paul and Charlie will hook up again. The last time for the couple was a one night stand.

Some of the guys are grabbing beers from their favorite drinking whole when Mike sees Abby. Their first date never got a chance to happen. This time and Jonny’s help gets him at least a second date.

Charlie contacts Whistler. He thinks she wants to reuse him again but she corrects him. She tells him she contacted him because she cared for him. Yet she rings Paul to tell him its all clear.

Mike and Abby are walking along the beach and they find a dog. She really like the dog and take him home with her. When Mike relays what happened to Paige and Johnny; they feel the need to warn him that the dog is the first step. Next she would want to fix Mike. Something that can’t happen while he’s undercover.

The bureau evidence is that many things have disappeared under Paul’s watch so they want Mike to catch him. To do so he’s going to have to get closer to Bello. That way he can work into a distribution role. But getting closer to Bello is getting even more dangerous. Bello is having a turf dispute. Mike sets up what he’s going to do by playing Paul. He pretends he doesn’t know what to do with Bello and makes Paul suggest he should attempt get close to him. Then he very convincingly takes the advice of his mentor.

Mike finds a way to gain Bello’s confidence; Western movies. Bello takes him to see videos and even recommends some Mike should watch. Then Bello gets heavy-handed with salemen when he demands to watch the movie on one of the flat screens in the store. The poor guy tries to be tough and say no but Mike beats him into submission.

Mike is with Bello and he finds out about something called “Big Foot” happening soo. Paul explains “Big Foot” is taking drug under the radar. How? They do it by submarine.

Charlie goes to Whistler for his help. She’s willing to rehire him in order to get in with the drug dealer that bailed. He knows now what her visit was all about but she calls them even because he’s been back on drugs. And he does come through for them. Whistler set up a meeting for them instantly. Charlie and Paul return to the house but Charlie doesn’t see Whistler. He overdosed in the bathroom. She returns to the room still willing to go through with the sting until the drug dealer changes plans. He wants to test them. They have to do drugs in order to meet the head supplier. Paul is trying to talk them out of an increasingly dangerous situation but Charlie goes and takes the drugs.

No undercover agent is allowed to take drugs. So what will happen to Charlie? It’s not as if they weren’t wired. The other agents had to have heard the situation.