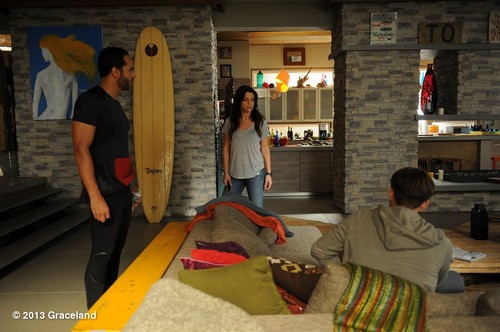 Tonight’s GRACELAND continues on the USA Network with a new episode, season 1, episode 10, called, “King’s Castle.” On this week’s show Mike is forced to push his own limits for the good of a case.  Did you watch last week’s season premiere? We did and we recapped it here for you.

On last week’s episode Bello’s last strike to the Caza Cartel set a war in motion that Graceland now needed to stop. While on her hunt for Odin, Charlie met an unusual ally and Briggs came face to face with the past.

On tonight’s show empers flare and relationships are pushed to the brink when Charlie (Vanessa Ferlito) discovers a secret about Briggs (Daniel Sunjata) and begins working with a Federale to find the truth. Mike discovers that Juan is missing and that the FBI has a suspect: Paul Briggs.  Guest Stars: Vincent Laresca, Ciera Payton, Dameon Clarke.

The show airs tonight on USA Network at 10PM EST and we will be covering it with all the details.  So make sure to bookmark this spot, and come back for our live coverage of Graceland Season 1 episode 10 right here.  Enjoy the show folks!  While you wait for the recap, check out the sneak peek of tonight’s episode below!

Apparently once you kill a man you tend to sober up really quickly. Briggs had only just finished murdering Juan that he realized he wouldn’t be able to sweep the incident under the rug. An agent can only kill in the field for self-defense but he can’t be under any influences. That would make his story hazy and less credible.

When he shot Juan, Briggs was completely drunk. He probably won’t even be able to recount the story properly tomorrow. So he does what he has to and begins cleaning up his mess. He’s going to hide the murder and the body. This could have worked if Juan hadn’t pre-recorded a confession about impersonating Jangles to confront Brigg. He left the tape in his radio police car that Briggs had no idea was there. After all why wound Jangles take a traceable car to the beach?

The real Jangles on the other hand is toying with Charlie. It was only earlier that she was trying to put the pressure on Bello for information. Although he’s remaining insubordinate. Bello refuses to say anything about Odin or the cartel. Information Jangles finds truly displeasing even though he hides it well in front of Charlie.

However Charlie has to come up with a backup plan. She’s going to use Mike, his cover wasn’t blown, in order to get Bello to talk. Briggs tries to caution them. He keeps saying Mike isn’t fully healed it and yada yada. But really all he wants to do is protect himself.

Mike agrees to the plan. He can’t say in the house with Paige giving death glares. She was one of the few he truly close to and now to be known as nothing more than narc; it’s too much. Prison would be easier.  Anyway right now Bello is proving to be his only true friend.

Charlie told Briggs she’d be visiting Mike at Prison. As a way to get Mike pulled out, Briggs scheduled another visit with Bello around the same time. So that when Bello walked into the visitor’s room he immediately saw Mike talking to Fed. Mike’s cover has been blown and he might have ripped up some stitches once Bello started hitting him.

Mike had only gotten back home when he got called into HQ. He thought he was going to get an accommodation but he really was brought in to figure out what happened to Juan. His “therapist” has disappeared and the agency wants Mike to hang around Briggs for when he slips up. Briggs is the only suspect for the disappearance.

Finally he thinks he’ll have time to rest and recuperate Mike return home to walk in on the party for DJ. Johnny’s idea of a surprise party includes strippers and an inflatable castle. Sorry but he’s not in a party mood. Nor is in the mood to deal with Paige. She pulled him aside to ask why he was playing best buddies with Briggs. She can’t stand the idea of him being plant and she wishes he would stop all of this pretending. Mike could have let her be angry when he decides to defends himself instead. He tells her everything they have on Briggs already. The drug habit and the fact his supervisor is missing.

She can’t really fight that against the particular molehill now can she. Still she believes Briggs could be innocent. She has ro believe that. Otherwise everything that happened at the house could be a lie.

DJ was out drinking with his ex’s new man. He find out there wre problems between the two. The firt moment he got he went back to his ex to ask for a second chance. She said no and he returned home in a temper. Unfortunately he saw Johnny first and punches him. Jonny attempts to calm him down but when that doesn’t work he addresses the house. He tells all of them that they’re all each other have so it’s time they accept they’re a family.

Guess loavle Johnny had his breaking point. He can’t watch Charlie suspect Briggs or Paige be surly with Mike. He may not know what’s going on yet he wants it to stop.

After Mike goes to see Bello in prison he came away wanting no more blood on his hands. He goes to see Briggs. He tells him he was investigating him. Briggs kind of suspected. He’s not mad though. Mike goes on to say how Juan was missing. He asks Briggs to help him look for Juan’s car but Briggs turns him down. He doesn’t want to make it look like a cover-up.

Mike admit to it so that he could see Briggs’s face when he mentioned Juan. He saw Briggs didn’t recognize the name and it’s true he didn’t. Briggs investigated the name once Mike left and that when he knew he killed an agent.