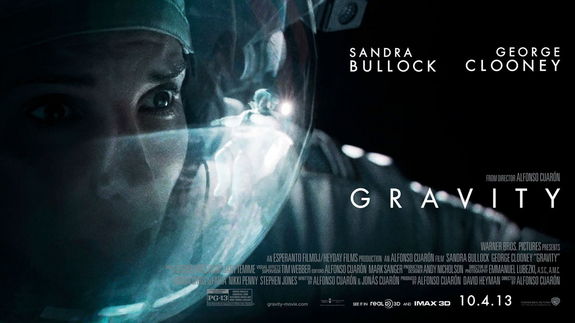 Although 12 Years A Slave has been stealing the thunder from other films at the Toronto International Film festival, Gravity [starring George Clooney and Sandra Bullock] is also getting a ton of attention.

This year’s line up of films is very, very strong and actually much stronger than the past few years – so expect to hear a lot about possible Oscar contenders in the media over the next few months.

What to say about Gravity? Well, it’s the work of a visionary. I’m not being hyperbolic at all – Alfonso Cuaron achieved the impossible. What he did with this movie, I seriously don’t know if anyone else could have done it.

Going into the movie, I had seen a few clips and a few trailers. I had the impression that while the film would be technically brilliant, it might be more on the existential side – women floating around in space, coming to terms with her life. And while that’s certainly a part of the movie, it’s a very, very small part. They don’t give it away in the trailer, but the film is an action movie. It’s a beautifully shot, well acted action movie, but an action movie nonetheless. It’s thrilling, the pacing is mostly excellent, and it moves fast.

I’m sure a lot of that had to do with the timing. Clocking in at just over an hour and a half, Gravity flew by – and it was perfect. I’m sick of movies being stretched to the limit by a story that didn’t require the time. Gravity came in quick, wowed us, and got out before it got less dazzling. And boy, was it dazzling.

The technical achievements were, obviously, brilliant. This is a fantastic movie to look at, and 3D actually works for this. The acting is very compelling, especially from Sandra Bullock, who is in top form. And it’s just a fun, wondrous joy to watch. And since I so rarely say that about movies anymore, this gets my hearty recommendation. The film releases on October 4th, 2013.