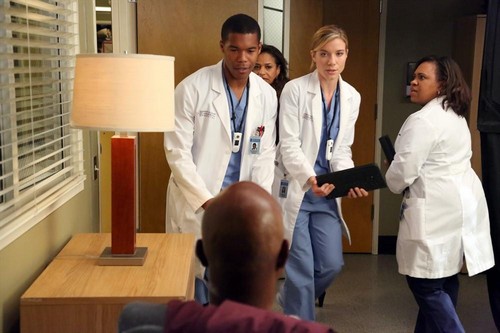 Tonight on ABC GREY’S ANATOMY continues with another new episode called “I Bet It Stung.”  On tonight’s show Meredith struggles with balancing work and family life.  Did you watch last week’s episode?  We did and if you want to catch up we have a full and detailed recap, right here for you.

On last week’s episode the doctors of Grey Sloan Memorial threw a fundraising gala which turned wildly competitive after Jackson made a rash promise. Back at the hospital, Bailey’s patience was tested when she had to deal with several extremely difficult patients. Meanwhile, Shane and Stephanie handled an incredibly busy ER by themselves and Alex revealed an emotional secret to Jo.

On tonight’s episode Meredith jumps back into work but finds it hard to excel at both motherhood and being a surgeon. Stephanie tries to make a good impression on Jackson’s mom, and Jo finds herself overly involved with her new patient. Meanwhile, Callie and Owen deal with an emotional situation regarding a patient.

Tonight’s episode looks like it is going to be a great episode and you won’t want to miss it, so be sure to tune in for our live coverage of ABC’s “Grey’s Anatomy” Season 10 episode 5 at 9 PM EST! While you wait for our recap hit the comments and let us know how excited you are about the season premiere.  Check out the sneak peek of tonight’s episode below!

On tonight’s episode Jackson was preparing himself to introduce his girlfriend to his other. Stephanie was getting herself worried all day over the meeting. She was even nitpicking over her clothes yet when the time comes and she does meet Catherine, it’s horrible. Catherine walked in on her and Avery making out in one of the break rooms. All that hard work over her shirt and she didn’t have it on during the crucial moment.

Catherine had only disturbed them because she was looking for another pillow for Richard. She’s been henpecking him since her arrival. To her no one is doing anything right. After what she saw she figures she knows the real reason the doctors aren’t giving their best. That’s why she implies to Avery when he tries to explain anyway.

In other parts of the hospital, Meredith is back. Maternity leave is over and her family has worked out a schedule that’s almost flawless. Almost stemming from somehow Callie is now in the family dynamic. Callie calls it feeling like a sister wife. To the point she tries to act professional at work and ignores Meredith’s call about the family.

Meredith gets to work on a groundbreaking surgery with Christina and yet all she’s been talking about is her kids. Their schedules or her needing to use her breast pump. This isn’t the A-team from old. Christina still tries despite these current events to get her old friend back. At least the doctor part.

Callie was busy with her patient and the patient’s sister. Her and Owen’s patient is a daredevil. Before that she was seriously ill but luckily she has a sister. A donor child otherwise known a child created to keep an older sibling alive. The daredevil needs a kidney. Will the sister that has given everything but be willing to donate one?

Stephanie needs to intrude on Catherine and Richard. She has a patient that put his penis in a hornet’s nest. There isn’t anyone else she can turn so she turns to Catherine. Who goes on to say she may have left things too late. Stephanie’s patient is now in excruciating pain. Catherine has to do surgery and she makes Stephanie book her an O.R.

Alex is in a bad mood. Things were going good with Jo but then she interfered where she shouldn’t. Alex’s dad came into the hospital needing care and Jo thinks Alex should talk to him. Alex doesn’t want to. His father abandoned his family and he’s never going to forgive that.

Jo refuses to listen and tries to help the older man. She set him up with a good rehab only to find out that he won’t go. Jimmy is a junkie and he’s not ready to change for anyone. If he keeps going the way he’s been doing then he’s going to die. Jimmy won’t listen and Alex won’t help.

Meredith had to postpone the surgery with Christina while she went to pick up her daughter from day care. The little fell and is going to need some stitches. There’s still time to do the surgery and to be fair she could have may it back in time. Unfortunately her patient started to code and Christina had to push up the procedure to save the patient.

Catherine had Jackson to sit on the surgery. It’s basically mother, son, and son’s girlfriend all looking at penis together. Inside the operating room thing remain awkward. Catherine does not give Stephanie an inch in impressing her.

Meredith got Alex to take over with her daughter but she can no longer do the surgery. Christina kicked her off the case. She said Meredith will be too preoccupied and she hadn’t read all the materials for the operation. She’s off and Bailey is on.

Callie talked to the sister of her patient and she made her realize that she doesn’t always to have be there for spare parts. She could be her own person. And so should Callie. She can’t always be the back-up parent to Derek and Meredith.

She kicks Arizona out of her apartment. She wants her own space back and she no longer wants to look after adults. She needs some “me” time.

After her surgery, Christina explains what happened to Meredith. Meredith was angry and accusing Christina of stealing the surgery. Christina told her that she’s no longer the competent surgeon. She let up. Bailey didn’t. Callie didn’t. So it’s not motherhood that stops women from being good surgeons.

Alex saw his dad and did nothing.

Stephanie did change Catherine’s point of view about her. She did it by standing her ground and stopped letting the other woman intimidate her.

When Derek come home, Meredith rips into him. She’s mad that he didn’t help around the house because he was too busy with his own surgery.

Arizona may be moving on from Callie with Leah.