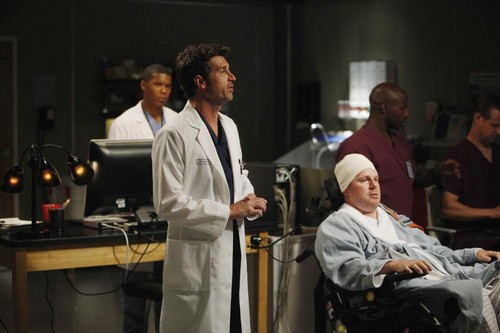 Tonight on ABC GREY’S ANATOMY continues with another new episode called “Map of You.”  On tonight’s show Dexter and Callie collaborate on a project.  Did you watch last week’s episode?  We did and if you want to catch up we have a full and detailed recap, right here for you.

On last week’s episode Meredith jumped back into work but found it hard to excel at both motherhood and being a surgeon. Stephanie tried to make a good impression on Jackson’s mom, and Jo found herself overly involved with her new patient. Meanwhile, Callie and Owen dealt with an emotional situation regarding a patient.

On tonight’s show Derek and Callie work on a brain mapping project, Richard encourages the interns to use his physical condition as a learning tool and after a discussion with Callie, Meredith considers continuing her mother’s research. Meanwhile, Shane continues to feel guilty about Heather’s death.

Tonight’s episode looks like it is going to be a great episode and you won’t want to miss it, so be sure to tune in for our live coverage of ABC’s “Grey’s Anatomy” Season 10 episode 6 at 9 PM EST! While you wait for our recap hit the comments and let us know how excited you are about the season premiere.  Check out the sneak peek of tonight’s episode below!

Derek’s groundbreaking case is going along until he notices a glitch. At least he hopes its just a glitch. Something is going with his patient’s neurons. They’re not connecting. Now it’s up to him and Shane to figure out why.

Shane for a moment got caught up in the excitement of being a second year. He’s even working with Derek. But after getting excited over his new white coat; he remembered. He saw what should have been Heather’s coat hanging in her cubby. Guess someone to forgot to cancel the order.

His friend what to know what’s wrong but not Stephanie. She a bit awkward around him ever since he kissed her. All she wants to do is focus on her own patient. A man with a broken ankle. She finds him and his wife so cute. Unfortunately she found he also has a tumor in his heart. How is she going to tell them. Cristina informs her after looking over the charts that her patient is dying.

Speaking of awkward, Meredith needs to create a case study. She only has the rest of today to figure it out but she refuses to get Cristina’s opinion on it. Things haven’t been good for them since Cristina told her she’s not a good enough surgeon anymore. Cristina wants to make it better and she can’t. Leaving Meredith to figure her case study all on her own. She found one that looked promising but once she heard her other was working on it then she gave it up. She doesn’t want to be seen trading on her family name.

She gave that particular case over to Shane. He might take it up. Derek may have admitted he was unfair to him back when Heather was there but he doesn’t correct Shane when he says now that Heather is gone it’s alright to her spot.

Derek has a lot on his plate. Probably too much to play nice. His patient has to remove censors that allow him to gain movement. He’s a paraplegic. The patient doesn’t want to do that. As a matter of fact he’s holding his permission until Derek finds a way for him to keep the censors. Derek went to Callie for help and she proved reluctant. She wanted in on the case originally to help Arizona but they’re over now. She’ll help in the end. She won’t abandon a patient.

Arizona is moving on. She’s seeing where a relationship will go with Leah. While she’s figuring that out, Alex is teasing her.

Cristina told Stephanie’s patient he was dying but he and the wife already knew. They knew and decided to live life to the fullest before he goes. However Shane finds a way they can keep him alive. Sure they want to be excited except they’re in debt. They used up all the credit cards and even bought a boat just to burn it. His life insurance was supposed to cover his wife after he was gone.

Cristina was preparing for surgery when she ran into Robyn, Owen’s new girlfriend. Robyn didn’t know Cristina and Owen were married but she does now. Cristina didn’t want there to be any discomfort.

Cristina did save her patient and then she had to watch him and his wife breakdown. They might go to prison with all their debt.

All day Richard has been driving Jo crazy. He’s has constant shoulder pain. Jo chooses to do an ultrasound to figure out why but when she does, Meredith thinks she pregnant. Does Alex thinks she’s pregnant too? He has been ignoring her ever since his father came to the hospital.

Alex isn’t mad at her. Not really. He’s been listening to his dad play and today he finally struck up a conversation. He doesn’t reveal himself but this way allows them to bond.

Shane won’t work with Derek. He’s found a new mentor; Cristina. She saw he had drive during their surgery and congratulated him on it. Stephanie on the hand hates his drive. It made him steal her case. She thought it was because she didn’t kiss him back when in actuality he’s over that.

Leah was happy to tell people about her and Arizona only to learn from Arizona that it was a one off. Leah is heartbroken. She thought they were starting something.

Callie does get the patient to do Derek’s bidding. All she had to do was talk and listen to him.

Jo impressed Richard with her diagnosis. She even made him laugh about it.

Alex did bond with his dad and he also learned he a half-brother. His dad abandoned the brother as well. Alex can’t forgive the man for repeating the same mistake.

Meredith picked her mother’s case. She found a new way to extend the research. Cristina is happy for her but Meredith doesn’t want her help. She feels Cristina never makes time for people that don’ want what she wants. Meredith was always there for her and Cristina didn’t return that when it was needed. The person that’s helping her is Derek. He’s going to give himself more time with the kids so that Meredith can work on her case study.