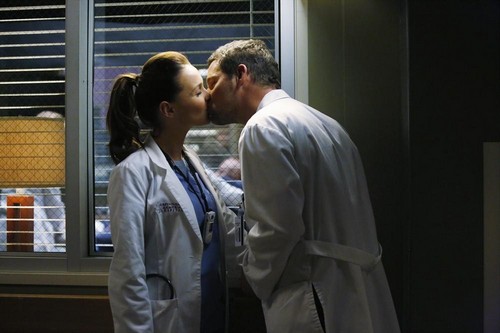 Tonight on ABC GREY’S ANATOMY continues with another new episode called “Sorry Seems to Be the Hardest Word.”  On tonight’s show Callie’s strength is put to the test.  Did you watch last week’s episode?  We did and if you want to catch up we have a full and detailed recap, right here for you.

On last week’s episode the issues between Meredith and Cristina hit a boiling point when one of them ultimately betrays the other at the hospital. Derek tells Jackson that he needs to let go and allow the second year doctors to work on his patients, and April and Matthew make a bold decision about their relationship. Meanwhile, Bailey has difficulties with Ben’s return.

On tonight’s show when an unexpected malpractice suit turns Callie’s world upside down, her supportive father (Hector Elizondo) arrives and shares an interesting secret with her. Meanwhile, through flashbacks, we learn some surprising details about Callie and Arizona’s marriage.

Tonight’s episode looks like it is going to be a great episode and you won’t want to miss it, so be sure to tune in for our live coverage of ABC’s “Grey’s Anatomy” Season 10 episode 9 at 9 PM EST! While you wait for our recap hit the comments and let us know how excited you are about the season premiere.  Check out the sneak peek of tonight’s episode below!

Several months ago an old patient of Cristina’s came back to the hospital. He’s famous in the sports world but he needed a new hip. His beloved Cristina recommended Callie for the job and he was all too happy to accept her. He had already heard about her and like the word she does. He also knew Callie was a risk taker – something he needed because he wanted to try out an experimental surgery. Callie was hesitant but she took the opportunity.

This all happened during good point in Callie’s life. She was still with Arizona and they had even discussed having another baby. Fast-forward to the present and she’s getting sued. Her patient is currently in a wheel chair and he feels it’s all Callie’s fault. So now she has to dress court appropriately and wear her wedding ring not after she made up with her wife but so that it’ll look better to a jury.

The trial is a media circus. The man’s lawyer is high on showmanship but low on morals. He tears into Jo’s testimony until the jury only hears the negative and never the why. The first time Callie cut into her patient he was bleeding too bad and she had to quickly close him up while there was a sponge inside. Later the patient had experienced an infection. Callie had to go into him again but something had to give in order to rid the infection. It was his hip.

The only good thing to come out of all the court drama is that it got Callie and Arizona back onto to semi-normal speaking terms. Thankfully it brought along her father. She needed someone to be completely on her side. Especially when the people that were with throughout Travis’s care can say nothing but bad news.

Travis wanted to sue both the hospital and Callie. However the hospital settled based on Cristina’s opinion of his care. She said Callie had ignored an early problem and then refused to have Cristina fix it. Instead she wanted to be the one that helped him and yet she kept making his situation worse. He slowly lost all functioning in his legs thanks to Callie up to the point they were amputated. If she had listened to Cristina he might not have gotten that bad. It’s why Cristina had thought Callie should settle. She told the board Travis had a good case.

During the crisis Callie could have been distracted. Arizona became pregnant during that time. But afterwards she told Travis the amputation was her fault. Although she said it out of guilt; her words came back to bite. This includes her of the cuff remark “She couldn’t be the one to turn an Olympian into a doorstop”.

Arizona had lost the baby. Both she and Callie were grieving and arguing. Callie wanted to try again down the road but Arizona was scared. She couldn’t suffer another loss like that. All of this was going through Callie’s mind. Maybe it’s why she missed a letter. It was sent from the original trial testers for the operation. The letter clearly states the surgical procedure causes infection. If Callie had read the letter in time then Travis would still have his legs. The letter was sent three weeks before his surgery.

Callie now knows she was in fact negligent. What will she do with the information? Her quick response is to release this news. Meredith was the one to stop her. She told her not risk her career on this one mistake.

Callie didn’t have time even if she wanted it to tell the court. The jury came back with a verdict. In the end, they found her not guilty.

Knowing her own mistakes, Callie is willing to be more forgiving to Arizona. She told her she could come home.