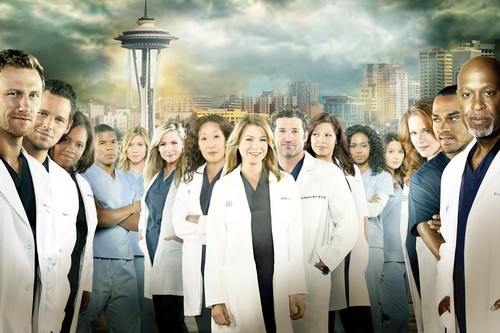 Tonight on ABC GREY’S ANATOMY continues with another new episode called “Two Against One.”  On tonight’s show Meredith and Christina’s friction starts to affect their work.  Did you watch last week’s episode?  We did and if you want to catch up we have a full and detailed recap, right here for you.

On last week’s episode it was Halloween and the doctors of Grey Sloan Memorial were hit with a barrage of spooky patients, which affected their own plans and put one doctor’s well-being in jeopardy.  Meanwhile, Derek collaborated with Ben on a new surgical technique, and Richard angered Bailey when he asked a second year resident to perform his next surgery, on a special Halloween episode.

On tonight’s show the issues between Meredith and Cristina hit a boiling point when one of them ultimately betrays the other at the hospital. Derek tells Jackson that he needs to let go and allow the second year doctors to work on his patients, and April and Matthew make a bold decision about their relationship. Meanwhile, Bailey has difficulties with Ben’s return.

Tonight’s episode looks like it is going to be a great episode and you won’t want to miss it, so be sure to tune in for our live coverage of ABC’s “Grey’s Anatomy” Season 10 episode 8 at 9 PM EST! While you wait for our recap hit the comments and let us know how excited you are about the season premiere.  Check out the sneak peek of tonight’s episode below!

Meredith is about to make her presentation and all the residents are excited. Unfortunately they had set themselves up for failure. One of things they tested using the 3D printer is not the specialized health care everyone was expecting. They had to test the machine by creating a fork. The poor residents fled the moment they spotted the utensil.

Derek on the other hand found something interesting in the presentation. The man working the machine has a twitch. He wants to fix that twitch and so does Avery. They want to compete on doing a surgery that will fix a twitch.

While there is Bailey. Bailey swears something is worn with her patient although her resident doesn’t spot anything. Jo though he was fine but Bailey booked an OR. At the last minute she got a different OR and this throws her. In the room she begins to unravel but this time Ben can’t ignore it. He’s been noticing her doing out of behavior mannerisms all day. Jo has yet to catch on.

Cristina and Meredith are doing that weird friendship thing. Finally Alex noticed but he never got the chance to figure out the why. Meredith said everything is fine.

April and Matthew have to figure out how they wish to proceed. Matthew feels like they’re uneven because she had sex with someone else and not with him. He wants to consummate but April wants to wait until they’re married. April goes to get advice from Arizona and finds she’s no help. Arizona isn’t resisting anyone. She did have sex with Leah.

Callie is busy interviewing a new doctor. She happens to also happens to have recently dumped Owen. Callie wants to do her friend a favor by completely interrogating Emma. It would be better if Owen were to know that Emma wanted children. Legally she shouldn’t have asked but when she did; she learned Emma wants at least two kids.

Baily messed up in the OR. She nicked something she shouldn’t have. Afterwards it took her a moment to get back into things. She literally had frozen.

Cristina and Shane have a patient that is slowly dying when Shane figures out a way they can save him. He read the manual for the 3D printer and he knows if they use that they can save a child. The only person stopping him is Cristina. Id she stop the printer during it regular exercise then it would set Meredith’s research back a day. She can’t do that to Meredith. Not with the way things are.

Avery has been putting Leah off. She wanted to carry out a procedure for their patient by herself and Avery told her not to do anything until he gets there. Derek said he was being like Sloan. Thinking the kids will never learn by themselves. He fixes the twitch with Derek and, taking Derek’s advice, decides not to babysit Leah so much.

Richard is still in bed. He’s been ready to walk around yet he hasn’t taken the chance. A psrt of him was scared.

Meredith and Alex were in surgery together when she begins to do something extra. Alex thinks she’s doing too much on a teenager and wants her to stop but all she hears is Cristina telling her she lost her edge. It takes Stephanie to get her to leave the boy alone. And also leave the OR. She was being too hard core.

Bailey is being hardcore as well. Instead of admitting she’s getting a confused vision she continues to dig into her patient. In her case there isn’t another attendee to stop her. Only Jo who doesn’t have power to overrule her.

Emma won’t take the job. She knows if they ever broke up again it seems, the rest of the hospital would take his side.

Cristina is desperate. She asks Meredith to use the printer and Meredith told her to submit to the board. Alex saw everything and he realized why Meredith was gung-ho on his patient. He doesn’t know about the rest but today she was a lousy doctor.

April decides not to have sex with Matthew. She wants him to keep his promise especially when she couldn’t keep hers.

Cristina stopped the printer to do her equipment. Meredith found her and Shane red handed.