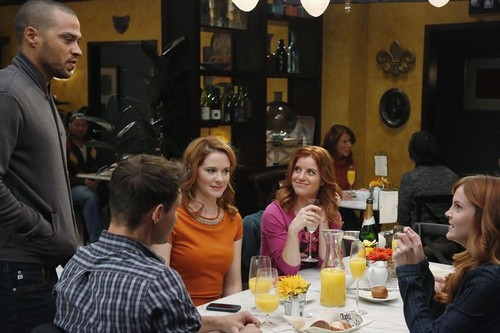 Tonight on ABC GREY’S ANATOMY continues with another new episode called “Man on the Moon.”  On tonight’s show wedding preparations begin for April and Matthew.  Did you watch last week’s episode?  We did and if you want to catch up we have a full and detailed recap, right here for you.

On last week’s episode Ben worried that a casual conversation with Derek could potentially cause issues for Bailey, Cristina turned to Shane as tension grew with Meredith, and April’s upcoming wedding made for an uncomfortable situation between Jackson and Stephanie. Meanwhile, Meredith planned a Thanksgiving dinner at her house.

On tonight’s show April’s sisters arrive to help celebrate April’s upcoming nuptials and quickly get on her nerves. Matthew and Jackson are forced to work together when they witness a terrible accident, Callie and Arizona work hard to reestablish their relationship and Cristina is pressured to live stream an upcoming surgery. Meanwhile, a familiar face returns to the hospital.

Tonight’s episode looks like it is going to be a great episode and you won’t want to miss it, so be sure to tune in for our live coverage of ABC’s “Grey’s Anatomy” Season 10 episode 11 at 9 PM EST! While you wait for our recap hit the comments and let us know how excited you are about the season premiere.  Check out the sneak peek of tonight’s episode below!

Cristina’s groundbreaking surgery just happened to be scheduled the same day Meredith is trying out her own procedure but on a sheep. Talk about competition between the two. They’re currently not getting on what with Meredith turning into a raging B***** ( the capital “B” wasn’t a mistake). Prior to their surgeries, Meredith nearly crowed (underneath her venom) with how Cristina’s idea was failing and now to be overshadowed could very well become her low point. God save Cristina if it is.

Cristina on the other hand isn’t even thinking about Meredith. She’s too busy with her new sex-toy called Shane. It seems he helps relieve and added stress.

Yet most of the hospital is unaware of this feud due to their own relationship problems and the upcoming wedding. April is having her bachelorette shower this week and her sister have arrived to help irritate the bride. Which means she basically had to abandon her soon to be groom. To add misfortune he somehow ended up getting stuck with Jackson of all people. The two men were together when they notice a man get dragged by a taxi. The poor guy’s tie was stuck in the door and the customer in the backseat didn’t feel like he should interrupt his ride for a man in need.

Luckily a doctor and paramedic on the scene were there to lend a hand. You would think they’d both be helpful but Jackson doesn’t like it when a paramedic overrides him on a medical decision. Did Matthew save his life or did he harm the victim by his rash actions? That technically should be what matters.

Speaking of issues getting in the way, Alex’s dad is back. The man is desperately ill and decided to play the same game with Jo like he did the last time. He came to her claiming he wanted to get help for his addiction. More like he wants a quick fix so he could go back to his nighttime habits. Well, Jo doesn’t want to deal with this again. She almost refused to treat him but he passed out right in front of her leaving her no choice. She tries to tell Owen her dilemma and he basically said “get over it, you’re a doctor”. When she told Alex however he wasn’t so pragmatic.

Bailey is under supervision for the foreseeable future. They have the psychiatrist following her around to monitor her OCD because it is a problem no matter what Bailey says. She’s not really functioning to her full potential.

Like Callie. Her recent case study appears to be failing and instead of talking it over with her newly reunited wife, she wants to use her as emotional punching bag. Although they agreed to try again; it is not easy seeing the girl her wife dated every day at the hospital. Especially when Leah watches them in hopes to catch their next break-up.

Meredith’s sheep didn’t make it through the day. And neither did Bailey’s resolve. She was trying to work through her disorder without medication but given a couple of minutes alone she was slowly sinking back into if not destructive then uncooperative habits. Maybe with Richard there watching her she can get better. She wasn’t willing for him to see her disorder but it’s out there and he might as well have an opinion. Like take the medication and she did…eventually.

There was almost a moment of reconciliation between Meredith and Cristina. Yet something went wrong and it always does. They kept hearing double meanings in each other words. Currently, Cristina’s patient is getting better thanks to her so soon resentment over their accomplishments will pop up again.

Alex’s dad had a little episode while detoxing. He nearly hit Jo after shoving her. Alex quickly arrived on the scene and was able to calm his dad back into restraints.

April finally had enough of her sisters and she fired them from her bridal party. She’s going to replace them with her fellow doctors. They were making her second guess herself all day. She even let out her frustration on Matthew. Sweet Matthew who did save his patient. Jackson said so later when he made peace with Matthew.