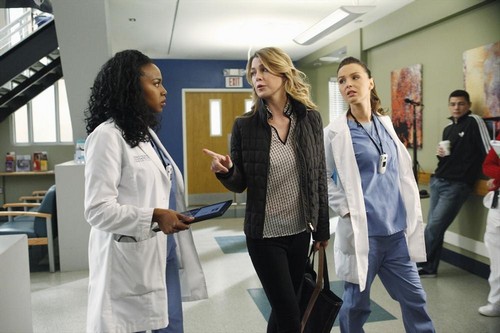 Tonight on ABC GREY’S ANATOMY continues with another new episode called “Somebody That I Used To Know.”  On tonight’s show an innocent slip could mean trouble for Bailey.  Jason George guest stars.  Did you watch last week’s episode?  We did and if you want to catch up we have a full and detailed recap, right here for you.

On last week’s episode when an unexpected malpractice suit turned Callie’s world upside down, her supportive father (Hector Elizondo) arrives and shares an interesting secret with her. Meanwhile, through flashbacks, we learned some surprising details about Callie and Arizona’s marriage.

On tonight’s show Ben worries that a casual conversation with Derek could potentially cause issues for Bailey, Cristina turns to Shane as tension grows with Meredith, and April’s upcoming wedding makes for an uncomfortable situation between Jackson and Stephanie. Meanwhile, Meredith plans a Thanksgiving dinner at her house.

Tonight’s episode looks like it is going to be a great episode and you won’t want to miss it, so be sure to tune in for our live coverage of ABC’s “Grey’s Anatomy” Season 10 episode 9 at 9 PM EST! While you wait for our recap hit the comments and let us know how excited you are about the season premiere.  Check out the sneak peek of tonight’s episode below!

Ben’s apprehension keeps building. He’s witnessing Bailey at home and at work. He knows something is wrong and yet can’t pinpoint the cause.

The feud between Cristina and Meredith continues. Their last heated exchange was over the the 3D printer. Cristina won her case with the board and was able to use the printer for a limited amount of time. But all the work going into may have been for nothing. Her patient is still alive thank to Alex but the organ she and Shane created didn’t come out as well. They have to create another one while sticking to their allotted schedule. To makes matter worse, Cristina is frustrated. She sees Owen with Emma being all cute and realizes she needs someone. Not as in a relationship. She merely needs sex preferable with someone over something.

Alex suggests she finds plaything. Shane overheard this embarrassing conversation and later offers up himself for “services”. Cristina isn’t feeling it.

Meredith thinks she’ll finally be able to continue with the printer today when Stephanie informs her about one of their patients. A lady dying of a pancreatic tumor was admitted. This same lady feels like she needs to make preparations for when she’s gone. Stephanie overheard her interviewing who would take her place with her husband. She doesn’t want to leave him alone for long. It’s a funny story and Stephanie would have shared it with Meredith if her mentor wasn’t still angry at her.

Another thing going on with Stephanie was that she was awkwardly asked to April’s wedding. It throw her and to double check on whether or not it was weird she asks her friends. Neither of the girls were invited. Jo thinks she’ll be Alex’s plus one so it doesn’t matter. As for Leah, she knows she won’t be a plus anything. Arizona told her it was over earlier.

Arizona and Callie are working on their marriage. Leah understands although she wanted Arizona to know she was open in case it didn’t work out with Callie. Arizona couldn’t do that. Leave Leah as a back-up. She wanted a clean break. She even told Callie she was seeing someone during their separation. Callie is willing to see where she was coming form but would she if she knew the other woman was Leah?

Ben tried to talk Derek from one friend to another. A big mistake. Ben only realized it after he told Derek how Bailey stayed for an extra hour doing surgery for no reason. Derek is under obligation to report Bailey as a board member if she’s acting this erratic. Derek takes Ben to Owen.

Meredith confronts Cristina on the printer. She wants the machine back. Cristina tries appeal to Meredith maternal side and guess what; it doesn’t work. Meredith tells her she had her chance and she wasn’t able to pull off the procedure. Why should she lose her funding based on the hypothetical?

With the way things are going Cristina won’t get invited for Thanksgiving. She invited Emma, knowing she could at least cook, when their small gathering slowly grows into a large party. Meredith invited people, Derek invited people, and now Owen wants to invite Cristina. He checked it with girlfriend/chef and she’s ok with it but he hasn’t run it passed Meredith.

Jackson checks in with April about why he hadn’t received an invitation when Stephanie got one. She told him about it and he was curious. It seemed he isn’t getting an invitation. April can’t put him on the guest list because it would be throwing her ex into her fiancée’s face. He feels if that’s the way things are then maybe he shouldn’t go. He’ll give April his blessing and that’s it.

Owen needed to do something about Bailey. He tried to pull her from surgery and replaced her with Meredith and she resisted. She did crumble to pressure in the end but after the doctors saw her lose control.

Leah was in the OR with Callie and Arizona when she got nervous. She needed Callie to let up and automatically turned to Arizona to back her. Arizona did and it became clear to Callie why. She knows they were sleeping together. Callie is naturally upset and Leah kind of figures out how their story will end. She tells Arizona is always going to hate her now. Callie will need someone to blame and it can’t be Arizona.

Richard was doing his stress test and he pushed himself too much. He cracked his ribs. He’ll be ok. All is hat is really injured is his pride.

Jackson tells Stephanie they don’t have to do the wedding. It’s not because he isn’t over her. He just doesn’t see the need.

Meredith went to get the printer when she saw Cristina and Shane using it. She begins to tear into Cristina when Shane interrupts. He tells her she was the one that turned this situation into an emotional fight. He kicks her out of the room and Cristina kisses him for it.

Meredith can’t see where she was wrong. It’s all about how Cristina is hurting her. Do they it out? No. yet the frost remains.