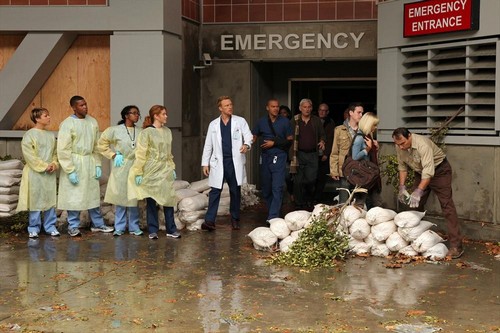 Tonight on ABC GREY’S ANATOMY returns with its 10th season premiere and it’s a double episode. Tonight’s show is called “Seal Our Fate;I Want You With Me” and on tonight’s show the devastation left by the storm rattles the hospital, and the life of one of Grey Sloan Memorial’s finest hangs in the balance.  Did you watch last season’s finale?  We did and if you want to catch up we have a full and detailed recap, right here for you.

On last season’s finale Grey Sloan Memorial Hospital entered crisis mode as the storm raged, resources become scarce and patients flooded in by the busload. Meanwhile, one of the doctors fought for their life.

On tonight’s show “Grey’s Anatomy” returns for its monumental tenth season with a two-hour event, the Grey Sloan Memorial Hospital doctors are faced with the devastation left by the storm. A giant mudslide in Seattle injures a group of first responders and citizens, causing the already shorthanded ER to spring into action. Meanwhile, Meredith is faced with a tough decision that will affect the life of a loved one, Callie is rocked by the reality of Arizona’s infidelity, and Richard’s life is in extreme danger. In the second hour, “I Want You With Me” (10:00-11:00 p.m.), the fight continues to save those affected by the storm, Callie makes a bold decision regarding her relationship, and the doctors come together upon receiving devastating news.

Tonight’s episode looks like it is going to be a great episode and you won’t want to miss it, so be sure to tune in for our live coverage of ABC’s “Grey’s Anatomy” Season 10 premiere at 9 PM EST! While you wait for our recap hit the comments and let us know how excited you are about the season premiere.  Check out the sneak peek of tonight’s episode below!

The storm outside is still brewing and one has started inside the hospital as well. The doctor’s love live have become a mess and no one seems to realize they haven’t seen Richard in a while. That’s because he’s passed out from being electrified.

A board meeting was a called. They have to close the E.R. They are low on supplies and they don’t even have a lot of blood left. The meeting was supposed to end on a professional note when Callie brings her personal matter into the situation. Now everyone knows Arizona cheated on her. Keeping their eye on the ball is going to be harder than they thought if they keeping bringing their feelings into it.

The hospital is overrun but Callie refuses to work with Arizona .It’s not until Arizona remains her last chance option does Callie accept her assistance.

Shane was supposed to deliver a message to Heather but Bailey set him on task to find Richard. He wanted to be taken seriously instead of running errands for everyone like a paperboy. He deal with Heather’s patient and send Heather to find Richard. How was he supposed to know any harm would come from it? Heather did find Richard and then she walked right into the water and got electrocuted. Her fall wasn’t as graceful as his. She hit her head going down. The only good that came from it was that the noise she was making roused Richard awake.

The E.R. should be closed but everyone is making do with what they got. Even if it means trading with other doctors. Meredith saw that scene between Stephanie and Jo from her hospital bed.

Shane took over for Heather and did her job. When Derek found out he didn’t complain but he still wanted Heather to complete the follow-up with the patient. Derek sent him to find her. Shane does find her and Richard. Luckily he was smart enough not to walk in the water. He immediately gets help although it could be too late.

The two newest patients are brought into the E.R and yet not even the greatest doctors can keep one of their own from flatling. Richard was awake for only a few minutes but by time he was getting medical help he constantly danced near death. Bailey isn’t giving up on him. Everyone else aren’t being as optimistic. Thank God, Bailey was able to talk Cristina through fixing Richard’s aorta. He finally has a stable heartbeat.

As for Heather. Derek and Shane did a scan and what they found has them already looking at her with pity. Shane also carries some guilt. He’s going to blame himself if they can’t fix her or if she were to die. The two men are to operate on her. Shane wanted his chance to be Derek’s go to guy and now he is.

Owen lost a patient. He was working on one of the first responders. The man’s comrades are heartbroken to hear the news. After such a loss he doesn’t have time to choose side between Cristina and Bailey. The women are fighting over what to do next with Richard’s health. Bailey wants to put him in surgery and Cristina thinks that’s too risky. Owen suggests they look into his file.

What they find is that Meredith is put in charge of medical intervenes if he was deemed incapacitated. She didn’t even know she was his person much less to make a snap decision. Cristina is her best friend and she just named her son after Bailey. Whose opinion can she trust?

Meredith agrees if the lab results look good then they’ll do the surgery if not then it’ll be a no. They do the test and surprisingly Richard’s results are higher than they were before. Richard is risking surgery and everyone hopes he’ll survive it.

There was someone running around taking down allergies and stats. The person would then write it on the patient to make it easier for the doctors. That person is an elderly woman that has been complaining about her house since she was admitted. She complained so much that Stephanie yelled at her.

Heather is hemorrhaging. Derek keeps on having to do more and more. They need Owen. Shane drags him out of Ricahrd’s surgery but it’s too late. She was dead. Richard’s surgery isn’t doing well either. Despite Bailey’s worried he was fine. Opening him up is what sent him into cardiac arrest. Avery’s mother had to yell that into her.

April’s fiancée saw the way she reacted around Avery. Matthew knows he’s her second choice and out of a fit he goes back out there in the danger zone. He can claim it’s to help people but April knows he’s running.

Callie left Arizona. As in Arizona came home to find Callie and the baby’s stuff gone. There was no explanation. Callie was going to go to a Hotel and Meredith offered up her place instead. Derek was giving quite a shock to walk in on a crying Callie in his living room.

Catherine Avery lays even more into Bailey later. She thinks Bailey rushed into surgery out of guilt. Richard had told her that Bailey had called him a drunk. After Catherine accuses her, Bailey even begins to second guess her actions. Meredith doesn’t feels if Catherine wants to be making the decisions then she’s going to let her.

Maybe she should take all of Meredith decision making. Arizona arrived at the hospital frantic wanting them to page Callie for an “emergency”. Meredith thought to calmed her down by saying her loved ones were at her house. Arizona isn’t calm. She just now knows where to find her wife and daughter. Arizona is arguing with Callie at Meredith’s before you know it. That blew up in her face. Hell, so did giving control to Catherine. The crazy lady is waiting till Richard gets better before moving him to a different hospital.

Cristina and Owen have been taking moments here and there to sleep together. Right around round ¾ Cristina is able to admit that just because it was her that called quits doesn’t mean letting go of Owen was easy. She loves him.

Heather co-workers mourn by getting drunk. It’s while they’re laughing that Heather’s mom comes in. She wants to know what happened to her daughter. She forgives them when she sees how they try to cheer her up. She even comforts Shane when she sees how broken up he is.

April and Aver officiated a wedding. They did it for their patient. Don’t go mistaking thinking they’re on friendly terms again. He’s cold to her. He tells her that she only wants him when she can’t have him. She could be simply panicking or she is indecisive. It doesn’t matter. She accepts Matthew’ proposal again.

Shane volunteers to help the firefighters and his friends volunteer with him. Stephanie knows Shane needs them.

Callie is working out a custody situation between her and Arizona. She doesn’t want to back to Arizona.