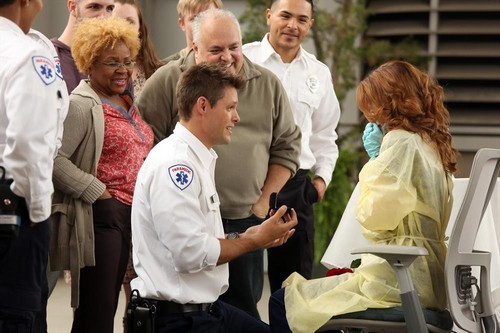 Tonight on ABC is an all new episode of GREY’S ANATOMY. Tonight’s show is called “Perfect Storm” and on tonight’s show the doctors are tested in a moment of crisis on the season 9 finale. If you missed last week’s episode we have a full and detailed recap here for you.

On last week’s show the doctors of Grey Sloan Memorial Hospital prepared for a super storm heading towards Seattle; Owen’s desire to be a parent got stronger as he became closer to Ethan; and one wrong move puts the lives of Meredith and her baby in jeopardy. Meanwhile, Jo looked to Alex for help in a moment of crisis, and one doctor got the shock of her life.

On tonight’s show Grey Sloan Memorial Hospital enters crisis mode as the storm rages, resources become scarce and patients flood in by the busload. Meanwhile, one of the doctors fights for their life.

Tonight’s episode looks like it is going to be a great episode and you won’t want to miss it, so be sure to tune in for our live coverage of ABC’s “Grey’s Anatomy” Season 9 finale at 9 PM EST! While you wait for our recap hit the comments and let us know what you think of Grey’s Anatomy season 9, so far? Check out the sneak peek of tonight’s episode below!

Tonight’s episode begins with a super storm striking Seattle and Grey’s Sloan Memorial Hospital is ridiculously affected by the bad weather. Right off the bat we learn that Meredith’s baby is ready to come but its face is presenting so she needs a c-section. That is decided two seconds before the hospital’s power goes out and the back up generator isn’t kicking on either.

Their are problems galore in the ER. Aside from Meredith and Derek conceding to a c-section in the dark, the NICU is filled with babies in beds running on low batteries. Also Cristina is talked into operating on a man who needs heart surgery. As a bunch of staff members are near the lobby looking for flashlights a school bus comes near the hospital and flips on its’ side before bursting into flames. Instinctively they all run towards the bus.

Meredith’s baby boy is born but his vitals are low. Supposedly it’s normal for an early baby to have low vitals and Derek rushes him to the NICU which is super low on batteries. Arizona and Alex bond while looking for batteries. She admits that she cheated on her girlfriend while Alex thinks he’s a bad luck charm. Parents in the NICU start to realize that the red lights mean that their babies are running out of oxygen and they are all panicking. Most of the people have been rescued from the bus but the flames get bigger as a woman is still trapped and her daughter is missing.

Of course Meredith’s delivery isn’t so smooth. She fell the day before and now is bleeding through her IV. It means there is internal bleeding that someone needs to open her up and find- in the dark. Did I mention that all the meds are under lock and key and no one can get to them? Derek decides that they need to teach the parents how to bag the babies. He has no clue that Meredith is unconscious bleeding from her spleen. After Cristina thanks Dr. Webber for making her be a better doctor she decides to check on Meredith. Dr. Bailey is also told about Meredith’s condition and she moves into action. After using an IV stand to smash open the meds she prepares to operate on her friend.

The bus explodes with Jackson barely making it out carrying a little girl wil Cristina and Derek sit huddled waiting to see if Meredith pulls through. Of course she makes it and will be fine. April is a basket case and tells Jackson that she wants him and will cancel the wedding if he gives her a reason too. Arizona and Callie have a huge fight. Arizona realizes that when Callie cut off her leg she lost her for good. Tonight’s season finale ends with Meredith naming the baby Bailey. And Dr. Weber appearing to have been electrocuted in the basement!