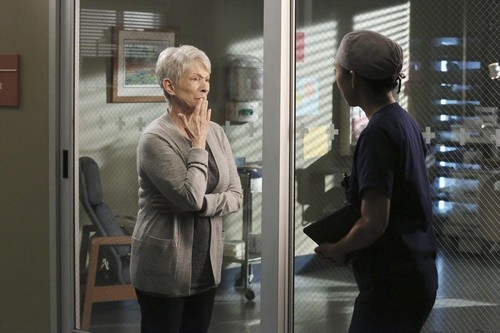 Tonight on ABC is an all new episode of GREY’S ANATOMY. Tonight’s show is called “Readiness is All” and on tonight’s show the hospital prepares for a natural disaster. If you missed last week’s episode we have a full and detailed recap here for you.

On last week’s show the doctors reached out to Bailey but she continued to shut everyone out; after an incident with Ethan’s grandmother, Owen feared the child could end up in foster care; and a new craniofacial specialist (Hilarie Burton) arrived at Grey Sloan Memorial Hospital to work on a young patient; meanwhile, a magician’s assistant was rushed into the ER after a magic trick went terribly wrong.

On tonight’s episode the doctors of Grey Sloan Memorial Hospital prepare for a super storm heading towards Seattle; Owen’s desire to be a parent gets stronger as he becomes closer to Ethan; and one wrong move puts the lives of Meredith and her baby in jeopardy. Meanwhile, Jo looks to Alex for help in a moment of crisis, and one doctor gets the shock of her life.

Tonight’s episode looks like it is going to be a great episode and you won’t want to miss it, so be sure to tune in for our live coverage of ABC’s “Grey’s Anatomy” Season 9 episode 23 at 9 PM EST! While you wait for our recap hit the comments and let us know what you think of Grey’s Anatomy season 9, so far? Check out the sneak peek of tonight’s episode below!

A Hurricane is heading towards Seattle. The hospital is on emergency mode. Meantime there is another storm heading their way. After seeing Joe’s Face, Alex is plotting something and may have even enlisted Derek’s help. He needs Derek because Joe’s boyfriend has been severely injured. Jason actually needs surgery over something the reports are showing occurred yesterday. Derek needs to know what happened but Alex informs him to make sure Jason doesn’t die.

Arizona is still flirting with the new girl. Which wouldn’t have been worrisome if she hadn’t been snapping at her wife earlier.

Ethan is scared about foster care. Owen tries to reassure him but Christina and Nancy already have some bad news of their own. The treatment isn’t working with Ethan’s father and certain options need to be discussed. Owen refuses to listen to diagnosis.

Bailey is back but only physically. She’s distant and appears emotionally detached. Her husband try to share his concerns with Owen when they notice a possible disaster and manage to stop another operating room from blowing up.

April is back in the operating room. She’s excited to show how capable she is. Unfortunately for her it’s her operating room that almost explodes. In such a dangerous area, Meredith is ordered from the room. She’s upset and wishes to complain to her husband when he informs her that Alex brought in a badly beaten Jason. Derek is hoping she could provide some answers but all Meredith could do is to rush to Christina. They need to get the full story from Alex.

The high risk surgery continues. They have to try not to get any sparks from the saw. The oxygen from the operating room plus sparks can cause an explosion. Callie is on a nervous high alert meanwhile April is saying a prayer. Every couple of minutes they have to stop at the smallest spark.

Derek is fixing Jason on the operating table. Jason injuries weren’t caused by Alex. He tries to Meredith and Christina that but they don’t fully believe until Joe admits she’s the one that beat her boyfriend to a pulp.

They’re finally finished with dangerous saw. There still more surgery to be done but Owen tells April she’s needed outside. She argues with him that she could do her job if she weren’t underestimated. He still orders her out.

Avery, Arizona, and Lauren are in another operating room on the disfigured baby’s case. Lauren shares her admiration for the group. She flatters them in more ways than one. After she leaves, Avery can’t help to gush about her to Arizona.

Joe explains that she was fighting with her boyfriend when he fell back and hit his head. She thought he was fine. Alex tells her to leave the hospital and to make sure no one sees her face. Christina and Meredith don’t agree with the plan but when Nancy comes in they make sure to hush up the situation.

Meredith and Joe are in the stairwell. Meredith doesn’t want Alex to take the blame and she gets that guarantee from Joe before she leaves. She’s rushing back up the stairs. She just found out that operating room isn’t dangerous anymore when she slips and slides down the stairs on her stomach.

Derek is still operating when he hears about Meredith. He leaves he rest of the surgery to his second command much to Christina’s dismay. However the baby is fine. The OBGYN tells the couple they were extremely lucky. She doesn’t have time to harp about being fine, something is happening.

April is still fuming when a patient is sent to the E.R. and she has to go out and meet him. Yet it’s looking like a set-up. There’s a surprise flash dance made just for April. Her boyfriend is proposing. Teary, she tells him “yes”. That’s why Owen and Callie had breathed a sigh of relief when April left the room to return to the E.R.

Heather is the one to tell Alex that Jason is fine and awake. Then she mentions he’s also asking for the police. Alex goes in to talk to Jason out of filing charges. Jason still wants to file charges. So Alex changes strategies. He mentions how everyone who owns the hospital just happen to be friends of his. Also if Jason were to tell his story all anyone will hear is that he hit a woman. Jason decides not to file charges.

Alex believes everything is ok when Derek enlightens him that he heard the entire conversation. He doesn’t care what lead to threat, he’s just disappointed Alex made it.

Owen is discussing possibly taking Ethan in with Meredith. He’s feeling sold on the idea and is merely worried about Christina’s reaction. Before he could talk it over with his wife, Christina informs him that Ethan’s dad is awake. Owen wants to feel happy for them but his heart’s broken. Instead of telling Christina this; he tells her to transfer the guy out to a different hospital.

Richard finally snaps at Baily. He tells her that she’s a surgeon not an assistant so should start acting like it. She’s not fully back but she does later on put her name up on the white board.

Derek thanks Heather for her help with Jason.

It’s Meredith that tells Christina about what Owen was thinking about. Now Christina is wondering what she should do now.

Alex and Jo are at the house. He’s mad with her for what she did to Jason. They’re talking it out but haven’t resolved anything. Then suddenly a tree crashes into the living room.

Arizona is still wrestling with her feelings. The light keeps going in and out until Arizona decides to take advantage of it. It’s her and Lauren alone in the room. They give in to what they’ve been dancing around their entire acquaintance. What she doesn’t know is that Callie, her wife, is looking for her.

In Next week’s season finale, Meredith needs a caesarian but they can’t do any major surgery with the full force of the hurricane bearing down on them. Will her baby be ok?