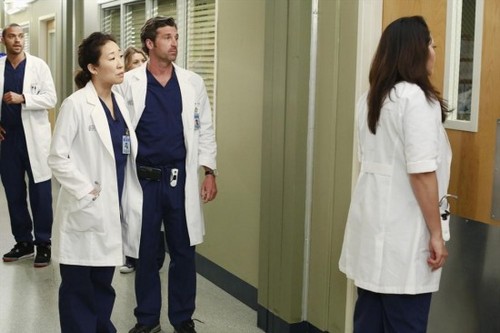 Tonight on ABC is an all new episode of GREY’S ANATOMY. Tonight’s show is called “Do You Believe In Magic” and on tonight’s show there’s magic in the air at Grey Sloan Memorial Hospital.  If you missed last week’s episode we have a full and detailed recap here for you.

On last week’s show Bailey found herself at the center of a CDC investigation surrounding the death of several of her patients, as Jackson and the rest of the board members argued over how to address the crisis with the public. Meanwhile, Cristina teased Alex about his unspoken feelings for Jo, and Owen continued to take special care of Ethan as the condition of his parents remained uncertain.

On tonight’s show the doctors reach out to Bailey but she continues to shut everyone out; after an incident with Ethan’s grandmother, Owen fears the child could end up in foster care; and a new craniofacial specialist (Hilarie Burton) arrives at Grey Sloan Memorial Hospital to work on a young patient; meanwhile, a magician’s assistant is rushed into the ER after a magic trick goes terribly wrong.

Tonight’s episode looks like it is going to be a great episode and you won’t want to miss it, so be sure to tune in for our live coverage of ABC’s “Grey’s Anatomy” Season 9 episode 22 at 9 PM EST! While you wait for our recap hit the comments and let us know what you think of Grey’s Anatomy season 9, so far? Check out the sneak peek of tonight’s episode below!

An emergency victim is brought in. Her sequenced outfit stained by blood. She was unfortunately the one chosen to be sawed in a half for a magic trick. The doctors are surprised she’s still alive. They take the assistant into surgery and they can’t seem to find the bleeding.

Arizona and the new doctor are flirting. She’s apparently over Baily being mad at her. On the other hand, Baily has perfected a way to ignore her friends and colleges. Callie is disturbed by the way Bailey froze her out she tries to inform the others but they’re not as worried as they can be. Their hands are filled with patients.

Arizona’s new case, a physical disfigured infant, involves working with the new doctor, Lauren. It’s an innocent meeting that feels like so much more

Owen and Ethan’s grandmother are discussing who will tell Ethan the bad news. Neither of them wants to do it. So Owen tries to distract the boy by playing some soccer and just being a friend to the kid.

The magician assistant is out of surgery. It’s a miracle she’s alive but her fellow assistant and the magician are too caught up playing the blame game. It isn’t until the women is having complications that the truth is revealed. The magician is married to her but the other sister is her lesbian lover.

April is having a hard time dealing with her patient. The young woman went drinking for her birthday. But her stomach ailment is more than just a hangover. April tries to interrogate the girl’s friends and if they weren’t blitz; they could’ve helped her before their friend started vomiting blood.

The younger crop of residents had watched the magician’s trick on youtube. Apparently it has become very populr due to the gruesome aftermath.

Meredith actually is worried about Bailey and asks Christina to have a go at trying to break Baily. Callie manages to convince Arizona to plead with Baily however that doesn’t even work.  Callie is not giving up though. She keep trying to recruit the others, especially Richard, but he feels that he was the one to hurt Baily the most during the investigation.

Christina and Alex share a bonding moment. Akex can’t get over Joe yet because he sees her everywhere. When the said Joe tryied to catch the elevator with them, Christina came to his defence and told Joe to take the stairs. Too bad for him there’s no Christina in the operating room. Derek happily lets Joe help with a patient much to the detirement of Alex who ready and willing to rush her right out of there.

Avery may be in trouble with his new girlfriend. He talks over her before giving her chance to reply. He does nevertheless listen to April. Dealing with their young and drunk has given them time to air out the past.

Callie wishes to stand in on Arizona’s case. Poor Callie is girl crushing on Lauren as well. But her’s isn’t the full stop attraction that Arizona is experiencing. That’s why Arizona is looking both awkward and embarrassed while her wife is gushing.

Ethan took his grandmother’s sleeping pills and is overdosing when Owen spot him at the hospital. He can’t help himself from snapping at the grandmother for her incompetence. The boy stabilizes and Arizona says things look good but she did call Social Services.

The magician’s wife/assistant is still critical and yet there’s a fighting chance for her. Meredith talks the husband and lover into a truce and they surprisingly they support each other.

Joe confronts Alex about their relationship. It seems they won’t be able to work together.  Joe doesn’t want Alex to interfere in her relationships and Alex can’t handle another emotionally damaged woman.

April and Avery are laughing together again. April asks him out to a friendly drink but he has a date. They try to play it off. Still there’s an awkward moment when April hears about his plans.

Bailey has been locked up in the lab all day. She’s been testing herself for contamination over and over again. Odds are by the look of it she’s tested herself nearly fifty times.  Even though each of the tests come back negative; she just keeps going. That’s how she’s able to zone out all of her friends no matter how many times they bang at the door.

Owen talks to Ethan about what he did. The kid just wanted to go to sleep. He understands that his dad may not come back to him. Owen and Christina tell him that they’re going to keep working on his dad. Christina has tried everything with the dad. No matter what she does nothing is helping. Still there’s more bad news. The social services won’t take the boy but his grandmother knows she can’t raise him either.

Avery’s girl manages to get a word and lets Avery knows she’s angry he hasn’t called her in eleven days. She wants to know if it’s because he’s now running the hospital. Avery puts a stop to all that nonsense by kissing her senseless.

Arizona and Lauren are alone in an elevator together. Arizona tells her she’s married yet Lauren doesn’t let that stop her. They can’t stop what’s been set in motion.

Bailey’s husband gets called it. He’s the only one that gets her to open the door. He finds out she’s scared about “it” happening again. She feels dirty and guilty.

Christina tells Owen she wants a kid. Things have changed. He tells her that he wants her. Will they take in Ethan? Meredith and Derek are enjoying a tea party with their daughter. Joe goes to Alex’s. She been beat up and needs a place to stay. What is Alex going to do to the boyfriend?

In Next Week’s Promo, a massive storm is coming to Seattle. But the main concern is when Meredith falls down the stairs. Is the baby alright?