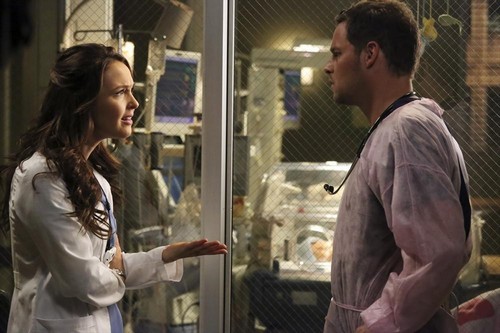 Tonight on ABC is an all new episode of GREY’S ANATOMY. Tonight’s show is called “Sleeping Monster” and on tonight’s show Bailey finds herself at the center of a CDC investigation. If you missed last week’s episode we have a full and detailed recap here for you.

On last week’s show upon receiving some unsettling news, Meredith and Derek took preventative steps for their children’s future; a group of Syrian doctors arrived at Grey Sloan Memorial Hospital for a crash course in basic surgical skills that they planned to apply in the field; and April decided to come clean to Matthew regarding the truth about her virginity. Meanwhile, multiple pre-op patients developed infections, causing one doctor to wondered if she is at fault.

On tonight’s show Bailey finds herself at the center of a CDC investigation surrounding the death of several of her patients, as Jackson and the rest of the board members argue over how to address the crisis with the public. Meanwhile, Cristina teases Alex about his unspoken feelings for Jo, and Owen continues to take special care of Ethan as the condition of his parents remains uncertain.

Tonight’s episode looks like it is going to be a great episode and you won’t want to miss it, so be sure to tune in for our live coverage of ABC’s “Grey’s Anatomy” Season 9 episode 21 at 9 PM EST! While you wait for our recap hit the comments and let us know what you think of Grey’s Anatomy season 9, so far? Check out the sneak peek of tonight’s episode below!

Can you imagine playing tug-of-war with the wrong rope? Well apparently a group from a family reunion thought it was a good idea to use clothes line and they ended up fingerless. That’s right, 6 fingers floating in a cooler and a bunch of screaming people to deal with.

Meredith has decided to have her baby naturally but talks to Cristina about her fears of pooping on the table. It’s a serious issue for Meredith who is horrified that Derek will make sure she is medicated and then she won’t even know how embarrassed she should be.

Cristina is more worried about her patient that needs to deliver a baby that then needs immediate heart surgery. She suggests doing the c-section in the cath lab simply to save time. Meanwhile Bailey is contending with the CDC analyzing her surgeries with patients. She tells the man questioning her that she knows that she scrubbed long enough because she always sings Aretha Franklin’s Think to herself while scrubbing. It’s 26 seconds longer than the 4 minute scrub rule.

Bailey is being grilled over all of her recent patients and the details of their procedures. She finally starts to crack and seems to be getting confused until she storms out asking for a break. She ends up in the cafeteria with Meredith. Meredith is about to let her see her patients chart when Dr. Avery interrupts them. He doesn’t want the CDC able to say she changed things. One of her patients is in the cafeteria and keels over in front of her family. Bailey rushes in to help but is pushed back by Avery.

Cristina takes her patient in to deliver her baby. She is afraid because she knows that his heart will stop beating as soon as he’s delivered and then needs to be revived for surgery. Cristina calms her down and all goes as planned. Bailey is lurking the hallway and overhears a doc telling his patients family that only one doctor infected patients and that doc is contained. He lied to get the family to agree to life saving surgery.

Bailey storms in to the main office and demands an answer. She ends up in a staff meeting where she finds out that she is indeed a carrier for a deadly staph infection. But it was the faulty gloves that caused her to infect people. She’ll be able to practice again but she’ll have to live with the guilt of infecting others. Tune in next week for more Grey’s Anatomy!