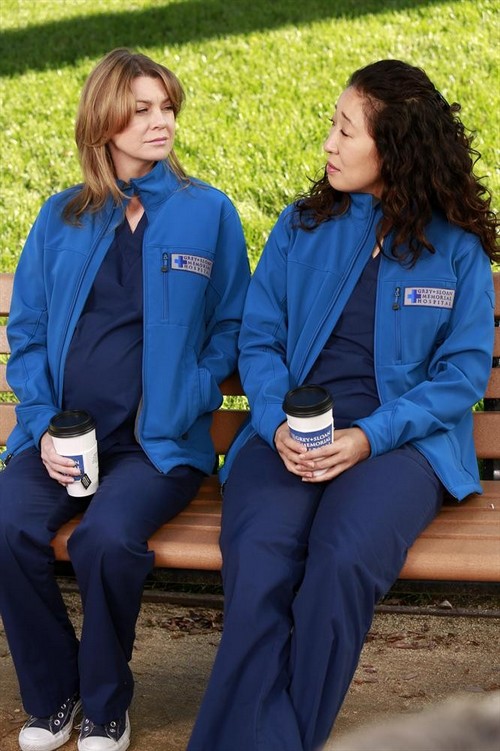 Tonight on ABC is an all new episode of GREY’S ANATOMY. Tonight’s show is called “She’s Killing Me” and on tonight’s show Meredity asks Cristina to take on a  big role in her children’s lives. If you missed last week’s episode we have a full and detailed recap here for you.

On last week’s show a gas tanker explodes on a Seattle highway, causing multiple injuries — including paramedic Matthew; Meredith and Jo helped a frantic mother (Sarah Chalke) whose child was suffering from a mysterious illness; and Owen bonded with a young boy whose parents are in critical condition. Meanwhile true colors were revealed when Alex was forced to work with Jo’s boyfriend on an ailing patient.

On tonight’s show upon receiving some unsettling news, Meredith and Derek take preventative steps for their children’s future; a group of Syrian doctors arrive at Grey Sloan Memorial Hospital for a crash course in basic surgical skills that they plan to apply in the field; and April decides to come clean to Matthew regarding the truth about her virginity. Meanwhile, multiple pre-op patients develop infections, causing one doctor to wonder if she is at fault.

Tonight’s episode looks like it is going to be a great episode and you won’t want to miss it, so be sure to tune in for our live coverage of ABC’s “Grey’s Anatomy” Season 9 episode 20 at 9 PM EST! While you wait for our recap hit the comments and let us know what you think of Grey’s Anatomy season 9, so far? Check out the sneak peek of tonight’s episode below!

Meredith wants Bailey to tell her if she has the Alzheimer’s gene. Bailey says she has tested positive for some of the markers.  Derek means it doesn’t mean she will get it but Meredith wants an updated will since they have a child and one on the way. The lawyer sends over a form. They need to name a guardian and a back up.

Crisitna’s patient has still not woken up despite the hypothermia being reversed. Owen thinks she should get a second opinion.

Ross still wants to suck up to Derek but he tells him to stop even as Brooks continues to fail to impress him.

Bailey tends to a patient with a burn. She gives Murphy a time out for possibly compromising one of the patients.

Owen is still trying to comfort the little boy whose parents were involved in the tanker crash. The mother recognizes Ethan to his relief.

A board meeting is held. Owen talks about how they are trying to teach Cyrian surgeons function with what they have.

Edwards tell Murphy that one of her patients needs to have surgery. Murphy explains that she had the flu. Bailey tells Steven that she will personally take care of his wife who has the infection. Later, Richard looks at a nasty infection that has developed on the arm of a patient who Bailey operated on.  Richard tells Bailey that she is dealing with multiple patients who have infections.

Social services may need to take in Ethan which leaves Owen unsettled.

Sara assists the Cyrian surgeons.  She is horrified by some of the conditions in which they have to operate.

Matthew tells April that he’s able to walk. Matthew says that his mother is coming to the hospital because he wants her to meet April. April is nervous.

Cristina says that she will be a guardian to Meredith kids if something happens to her but she doesn’t really want to be a mom. Crisitna says she’s willing to take the kids 3 weeks out of the year and that she’ll be the coolest aunt in the world. Crisitna says they already have a mom and that Meredith is not dying right now.

Ross is still trying to suck up to Derek.

Bailey is horrified that there are three patients who have this horrible rash. Owen says they have to call infection control and that this is going to be a nightmare. Murphy thinks she is going to be fired.

Owen tells Ethan that Social services will be taking him, but Ethan doesn’t want to leave.

Cristina helps one of the Cyrian doctors with his sewing up of a patient. The other doctor is amazed by all the resources the Americans doctors have.

April tells Matthew she’s not a virgin. She explains she really wanted to wait for someone like him for marriage but she screwed up. She worried that he wouldn’t be able to get over it. He says that she assumed he’d care more about her virginity than a war but even in war, people still value honesty. Matthew and his mother leave the hospital as April watches. Later, April gives the Cryian doctors sophisticated supplies.

Cristina is upset that Owen wants a team of doctors to overlook her patient’s care.

Derek tells Ross that Brooks has an instinct that he doesn’t. Derek says that means he has to teach her and that Ross has to figure out where he’s going to be a good surgeon.

Richard tells Avery that his project is this hospital. He convinces him to go to dinner.
Cristina notices the bond between Owen and Ethan.

Murphy tells Meredith she won’t be getting fired because it’s much worse.  Bailey starts to blame Murphy but Meredith says that the only doctor who touched all three patients was her. Owen takes her off the case and tells her to sit down.