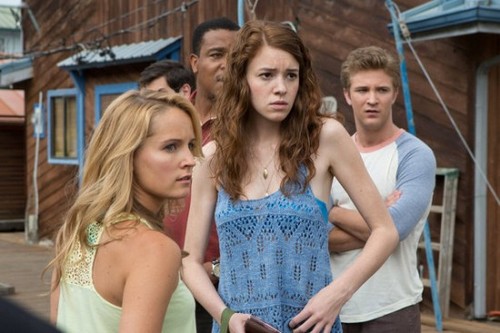 Tonight GRIMM returns to NBC with a new episode.  On tonight’s show called, “One Night Stand,” Captain Renard (Sasha Roiz) makes a startling realization about the possible identities of the Royal Baby’s parents.  Did you watch last episode?  We did and we recapped it HERE, for you!

On last show, a series of disturbing crime scenes leads Nick (David Giuntoli) and Hank (Russell Hornsby) to the resurrection of an old feud that’s all too familiar for Nick and Monroe (Silas Weir Mitchell). With the news of a royal family member’s demise, several key players start to make their move. Meanwhile despite his recent trauma, Nick finds himself healthier than normal and Monroe and Rosalee (Bree Turner) talk about moving their relationship forward.

Tonight’s episode of Grimm opens with a group of twenty-somethings swimming in a lake. Someone is watching them from the bushes. One of the girls’ deaf sister is hiding in the woods, she sends her home and tells her she will never be like them, and she can’t hang out with them. The girl heads into the lake with her boyfriend, and her deaf sister runs out of the woods and steals his cell phone. Meanwhile in the lake some sort of creature is pulling the swimmers underwater and drowning them. The deaf girl pulls one of the guys out of the water and does CPR to save him, her eyes are glowing like a demon though, and she runs off before he sees who saved him.

Monroe and Rosalee are unpacking Rosalee’s things, she is moving in with him.

Nick and Juliette are getting themselves ready for work, and having coffee. Juliette asks about the Dr.’s reports, Nick tells her to check his emails and let them know what he says.

Nick and Hank are investigating the drowning at the lake. They pay the man, named Jake, that the deaf girl saved a visit, they reveal to him that his friend Daniel is dead. He tells the cops that something pulled him underwater. He reveals that he didn’t know the girls at the lake, he met them at the lake. All he knows is they were sisters named Sarah and Anna. He says Sarah and Anna, and the girl that saved him all disappeared. Hank and Nick take him to the lake to jog his memory, and Hank sees the deaf girl running through the woods. She jumps in the water and swims away ridiculously fast, it is obvious she isn’t human.

Captain Renard is still searching for Frau Pech, he receives a photo of Adalind from the man that is following her. He is concerned that she is having a baby with Royal Blood and selling it.

Hank and Nick are sharing information on their new case with Monroe and Rosalee. Rosalee thinks the girl may be a Nyad. Monroe digs out an old book about Nyads, it is a journal of an old sailor’s, and he had personal experiences with a Nyad.

Hank and Nick did a GPS search on his missing cell phone (the deaf girl stole it). They trace it to a house-boat at the marina. They find a man named Abel at the boat, he claims he doesn’t know anything about a drowning. They search the house-boat and find the phone inside. They also find a photograph with the Nyad girl, Abel claims it is his daughter, her name is Allie. Meanwhile Jake is sitting in the car, and he sees Sarah and Anna. He runs up to them and reveals his friend Dan is dead, but they act like they don’t know him. Hank and Nick take the girls back to the precinct for questioning, their Dad begs Nick not to take them, and he reveals that he is also a Nyad. Nick doesn’t care, he leaves with the girls anyways.

After Nick leaves Abel freaks out on two fishermen. He blames them for the drowning. But the fishermen blame Allie, his daughter. If she hadn’t pulled Jake out of the lake, there wouldn’t have been any witnesses. They say they are going to “take care” of Allie.

Nick and Hank are questioning Sarah and Anna. They reveal to them that they know they are Nyads. Nick also tells them that he knows they will dry out and die if they don’t get back in water soon. The girls refuse to answer any questions. Nick and Hank think they are protecting somebody.

Abel arrives at the precinct. He confesses to Nick and Hank that he pulled Dan under water and drowns him. It is obvious he is lying and trying to protect his daughters.

Jake returns home and finds his window open, someone has been in his house. It’s Allie, he tries to talk to her but realizes she is deaf. She leads Jake outside to the pool, and jumps in and swims around, she emerges from the water and shows him her blue eyes. He is shocked, before he can say anything the two Nyad fishermen that threatened Abel appear and hit Jake over the head. They grab Allie and leave.

Monroe and Rosalee are still unpacking, Rosalee is paranoid because she thinks Monroe is having cold feet about them living together.

Nick and Hank reveal to Sarah and Anna that their father has confessed and they will be bringing him in. One of the girls caves and admits that the fishermen, Dominick and Jesse, drowned Jake and Dan. According to Sarah- Dominick and Jesse are also Nyads, they are supposed to marry them. Sarah also reveals that Nyad men are sterile, in order for Nyad women to reproduce they have to sleep with humans. They think Dominick and Jesse were jealous that they were sleeping with humans, so they killed them.

Jake calls Nick and tells him that Allie was at his house, and the fishermen took her. Nick and Hank head to the marina to save her. The fishermen knock Allie out and tie her to an anchor, and throw her in the water. Nick and Hank are able to handcuff the fishermen, and Nick heads under water in search of Allie. He finds her unconscious body and brings her up to the surface. Hank is concerned that Nick was able to stay underwater so long, and he is pale and has a strange look in his eye. It is obvious he is still half zombie.

Juliette is at home reading Nick’s email to see what his Dr. has to say about his physical. His Dr. says he is perfectly healthy. She does a little snooping through his inbox and finds a strange email from somebody called “M.” It says they are no longer say and can’t send any money.

Hank and Nick lock up the fishermen, they know that they won’t survive a night in a cell, but it is the price they have to pay for drowning a human.