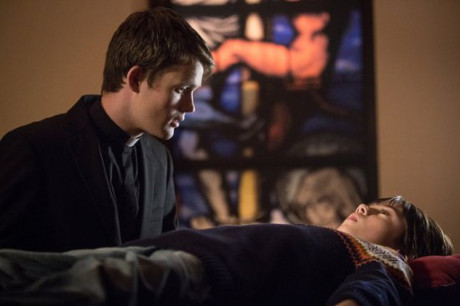 Grimm returns tonight with an all new episode called “Stories We Tell Our Young.” If you missed last week’s episode, don’t you worry your little Wesen heart, because we recapped the show for you RIGHT HERE. Tonight’s episode is going to be a good one, filled with some spookiness and more of the wondrous, magical mythology Grimm has become known for creating. Will you be tuning in for tonight’s episode?

What are you most looking forward to tonight? Captain Renard’s journey has always intrigued us and we’re curious to see where he runs off to . . . especially being that he has some “family matters” to tend to. We’re quite aware of his rocky family relationships, and the prejudices he’s faced from his royal family for being part Wesen, so it’ll be interesting to see what becomes of his mysterious meeting.

Tonight’s episode of Grimm opens with a young boy and his Mom and Dad in a church late at night. They tell the young boy that the Monsignor is going to help him. They leave their son in the room with Monsignor, and tell him “there is nothing to be scared of.” His parents head out to sit on the pews and wait for him, his Dad is upset that they couldn’t be in the room with him.

Monsignor lays the young boy down on a table and begins chanting a foreign language while dripping holy water on him. The boy begins transforming into a demon, Monsignor ties his hands down. But, he is too late, the boy is too strong, he breaks free and throws Monsignor across the room and kills him.

Hank and Nick arrive at the church, Monsignor and is dead, and his clergy is seriously injured. And, the young boy is missing. His parents are still sitting in the church pews, frantic. Nick and Hank learn that Monsignor was performing an exorcism. Nick hears a noise while he is investigating the crime scene. He opens a cupboard and finds the young boy, Daniel, hiding inside. Hank runs and gets Daniel’s parents. Daniel is scared and confused, and he has no idea that the Monsignor is dead.

Daniel is taken to the hospital and heavily sedated. Hank and Nick head to the hospital to talk to Daniel’s parents. According to Daniel’s Dad, about a year ago he began have violent and angry mood swings. His Dad reveals that when he has a mood swing, his face changes into something evil. Nick and Hank leave the hospital, Nick is confused though because if Daniel is possessed then it is hereditary, and neither of his parents have had any demonic issues in the past.

Captain Renard has headed home for his first time since his brother’s death, he is picked up at the airport by a driver. Renard is taken to an underground dungeon, to keep his arrival in town secret. They are going to travel underground through the sewers. He doesn’t want anyone to know he is in town.

Nick and Hank rush back to the hospital because the clergy is awake, they need to find out what happened. The clergy tells them that Monsignor called the beast out of Daniel, and he reveals that Daniel’s face transformed into that of a demon.

In Daniel’s hospital room a nurse is inserting a needle to draw blood. She rushes out of the room screaming, and collides with Nick and Hank. Nick and Hank rush into his room, and see the boy’s face. He morphs back into Daniel and lays back down. Nick realizes that it is confrontation that brings out the demon in him. He calls a guard to stay with Daniel and heads out to figure out what he is.

In Vienna Adalind receives a mysterious phone call requesting his presence at a meeting.

Hank and Nick head to Rosalee and Monroe’s house to try and figure out what Daniel is. Rosalee and Monroe think that he is a mutant version of a Wesen, that is a danger to society. It is their responsibility to report Daniel to the Wesen council. Hank asks what will happen to him, and Rosalee tells him that the Wesen Council will “make Daniel disappear.” If they don’t report him to the Council and the Council finds out they hid Daniel, then they will disappear.

Nick heads home and him and Juliette hit the books to try and find out what is wrong with Daniel. According to the journals he has from his ancestors of Grimms, Daniel is not possessed, but has a disease. Juliette and Nick head to the hospital to try to figure out what disease Daniel has before the Council gets to him and “make him disappear.”

Someone is Vienna breaks into Renard’s safehouse and tries to kill him. He manages to fight them off.

Juliette questions Daniel’s parents about what happened to Daniel a year ago, when he began having mood-swings. Daniel’s Mom reveals that they went on vacation a year ago to Jerusalem, and Daniel got the flu there. Juliette thinks he may have contracted a parasite in Jordan.

A member of the Wesen Council pays Rosalee and Monroe a visit. Rosalee had called the Council, and told them about Daniel. Rosalee sends the Council Member to the Church. Monroe rushes to call Nick and warn him that the Council is on his way to the hospital.

Nick, Hank, and Juliette rush to the hospital to get to Daniel before the Council does. Daniel is gone though. He was discharged to his parents. They head to Daniel’s house. Juliette explains to his parents that they think he contracted a parasite when they were on vacation. They make arrangements with his parents to get him tested in the morning for parasites.

While they are downstairs talking to Daniel’s parents they hear a noise upstairs, they rush to Daniel’s room and he is gone. He escaped out of his window, the Council member is chasing him through the woods. Hank and Nick are able to subdue the Council member, Nick heads out to find Daniel while Hank holds down the Council member. Nick finds him passed out in a tent in the woods. Daniel ran through the water and is experiencing hypothermia. The parasite in his body crawls out through his nose and mouth, and dies. His body is too cold to keep the parasite alive.

In Vienna Adalind arrives at her secret meeting, a man opens the door and tells her that the Prince is ready to see her.

The next day Nick meets up with the Council member, he gives him Daniel’s medical file and explains that he is not demonic, but was sick. Daniel is cured now, the Council has no reason to “make him disappear.” The Council member takes the medical report back to the Wesen Council.

Nick heads home and updates his books, future Grimms will read his books and know that possessed children don’t have to “disappear,” they can be treated.