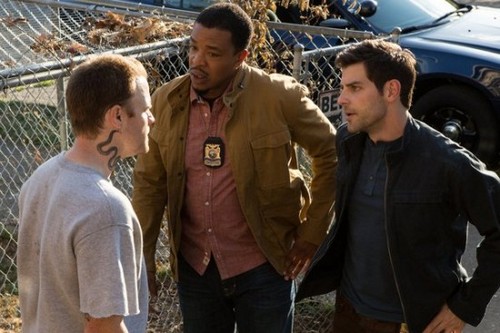 Tonight GRIMM returns to NBC with a new episode.  On tonight’s show called, “El Cucuy” a vigilante takes new shape to clean up the neighborhood – Manny Montana guest stars.  Did you watch last episode?  We did and we recapped it HERE, for you!

Tonight’s episode of Grimm starts off with a flashback from two weeks ago. A gas station attendant is working the night shift, and the store is robbed. Two men in masks clean out the cash register and assault him. The gas station attendant, Andre, is in critical condition at the hospital, while his mother holds vigil. She prays for justice, and claims that the men that hurt her son are evil and deserve to be punished. Meanwhile, a beast with claws is sitting in a motel watching the story on the news.

Juliette is still obsessing over the mysterious email that Nick received from “M.” Nick walks in the door, and Juliette questions him about the email. Nick reveals that “M” is his mother. Juliette is upset, she was under the impression that his mother is dead. Nick explains that his mother showed up when she was in the coma. A man showed up to their house and tried to kill him when Juliette was in the hospital, but his mother appeared out of nowhere and saved him from the man. A friend of his mother’s was in the accident with his Dad, and whoever killed his Dad thought they killed his mother. She doesn’t want people to know she is alive since they were trying to kill her. The email that Nick received means that she is in trouble.

In Vienna, Austria, Adalind is getting an ultrasound. Her baby is healthy. But, the Doctor detects a second heartbeat, it doesn’t look like twins though. Either her baby has two hearts, or it may be an echo. She has to return in two weeks for a follow-up. Two men are following her, and sitting outside watching her leave the Doctor’s office.

The same two masked men are robbing another gas station. This time there are customers in the store. They clean out the cash register and run to their car. They don’t make it into their cars though, some sort of monster is waiting for the,. He uses his huge claws to brutally murder the robbers.

Nick and Hank arrive at the murder scene, to investigate the death of the robbers. There is one witness, a man named Martinez, he didn’t see the murders he just heard them. He says it sounded like dogs ripping the men apart. Martinez is nervous though, and paranoid someone is going to see him talking to the cops, he goes back in his house. Nick and Hank investigate the victims’ car and find their wallets, masks, and the bad of money. They head around the corner to the gas station that the victims robbed. They pull the security tape so they can try to ID any of the customers in the video, and question them about what may have happened to the victims after they left the store.

Juliette is doing some investigating of her own. She is trying to trace the IP address from the email that Nick received from his Mom.

Nick and Hank bring in the witnesses from the store robbery. None of them seen any dogs or wild animals outside that may have shredded the robber’s throats. One witness does give them the name of a man named Ray Bolton that lives in the neighborhood and raises dogs for dog fights.

When Nick returns home, Juliette meets him at the door. She is excited because she tracked the IP address from his Mom to Vijna Gorda, a place in Slovenia.

The next day Nick heads into work, and Hank has information on Ray Bolton, the dead gas-station robbers were associates of his. They head to his place to bring him in for questioning. While they are handcuffing him, a crazy townie shows up and says it is “about time” the cops did something about Bolton. Flores, the crazy townie, was at the gas station the night before, and upset with the cops that they weren’t able to stop all the crime in the neighborhood.

At Monroe’s house, he is working out, and Rosalee answers the phone for him. It is Monroe’s mother, she has no idea that Monroe has a girlfriend, let alone that she moved in with him.

Hank and Nick are questioning Ray Bolton, he says he has nothing to do with the gas station robbers deaths. Sgt. Wu reveals that the tests from Bolton’s dogs came back and their hair and teeth do samples don’t match the murdered victims. Hank doesn’t want to let Bolton go though, because he is mythical creature, and he thinks he is responsible for the murders. Nick doesn’t know what kind of creature he is though, when he morphed into beast-mode, Nick had never seen any creature like him before.

Hank, Nick, Rosalee, Monroe, and Juliette are having dinner and looking over photos of the murdered victims. According to Juliette, the victims weren’t attacked by a dog, whatever killed them is way too strong for a dog.

While Nick and his team struggle to come up with answers about the gas station robbers’ deaths, an innocent woman is walking down the street alone at night. A man comes out of nowhere an attacks her, but she is saved. A large creature intervenes, ripping the man off from her, and begins clawing her attacker’s throat out. She scrambles up and runs away.

Nick and Hank are called to the murder scene, it looks like the crazy townie Flores beat them there. It clearly wasn’t Ray Bolton that killed her attacked, he is still in jail. They head over to the ambulance to question the woman that was attacked. When they ask the woman who killed her attacker, she said it was “el cucuy.”

Nick heads home, and asks Juliette if she knows who “el cucuy” is. She says it’s the Spanish word for the “Boogeyman.” Juliette takes Nick to see her Spanish friend, Pilar, and learn more about “el cucuy.” According to Pilar, when she was a child old women used to call for “el cucuy” to come save them from the evil men. Then all of the evil men began turning up dead in her neighborhood, with their throats clawed out. Pilar believes that “el cucuy” travels from place to place and saves women from that have called for his help from evil men. Juliette and Nick head home and hit the books, but they can’t find any information on “el cucuy.”

Ray Bolton is out of jail, and the first thing he does is pay the crazy townie Flores a visit. He assaults him and warns him that this is not his neighborhood.

Nick and Hank pull the security tape from the bus that the woman was riding before she got attacked the night before. They realize that one of the customers they interviewed after the gas station robbery were on the same bus as the woman that was attacked. It is a small, elderly woman, named Mrs. Garcia.

They pay Mrs. Garcia a visit to question her again about the crimes. She agrees to come down to the station with them and look at some photographs to see if she can ID the attacker. On the way to the police station, Nick and Hank receive a phone call about the townie Flores. His Mom has called the cops and is afraid Flores is going to Ray Bolton. Nick and Hank take a detour and head to Bolton’s house, with Mrs. Garcia in the car. When they arrive at Bolton’s house, he is assaulting Flores. They save Flores and send Bolton back into his house. Then they realize Mrs. Garcia has vanished from the backseat of their car. They hear screams coming from inside Bolton’s house, and rush inside to find Mrs. Garcia ripping out Bolton’s throat. Mrs. Garcia is “el cucuy.”

Nick and Hank are conflicted. No one will believe them that a fragile 77 year old woman is responsible for slaughtering three large men with her bare hands. They have no choice but to let her go, after all, she is only killing evil men, not innocent ones.