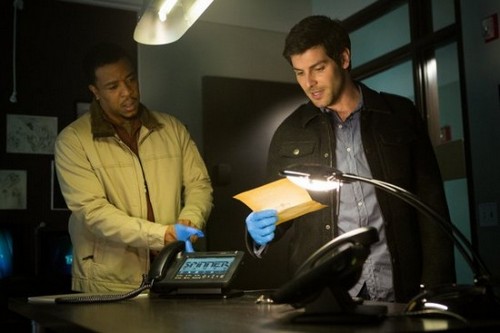 Tonight on NBC is a whole new episode of GRIMM.  On tonight’s show called, “Nameless”  Juliette’s (Bitsie Tulloch) mysterious hallucinations finally start to take shape, giving them a whole new meaning.  Did you watch last week’s show?  If you missed it there is a full and detailed review here!

On last week’s show when a mysterious case of sudden blindness caused a woman’s death, Nick (David Giuntoli) and Hank (Russell Hornsby) come across a disturbing Wesen that fed off its victim’s tears. Meanwhile, Adalind (Claire Coffee) contemplated the significance of her new situation, while Juliette (Bitsie Tulloch) continued to work with Rosalee (Bree Turner) in an effort to fix her memory. Silas Weir Mitchell, Sasha Roiz and Reggie Lee also starred.

Tonight on Grimm, an office party is being thrown, when two unlucky party goers sneak off for a quick rendezvous. The two characters Jenna and Brody put a halt to their make out with Jenna leaving the room. Unfortunately for Brody, a creature wit poisonous claws decides then to strike. Hearing a commotion, Jenna returns to the room only to find Brody cut in half. Her screams put a quick end to the party.

At the Police headquarters Captain Renard makes a call to his spy in Vienna when he’s told by the informant that they have to meet. He agrees despite the risk only for the spy to have someone watching him.

Nick and Hank are investigating Brody’s murder when the killer calls them with the ominous words “Play my game”. The same words he wrote on the wall after killing Brody. What makes the phone call worse was the realization that it coming from the newly dead’s office. They miss the culprit by seconds but found his second message. He had spelled out “What’s My Name” on several popular fantasy title pages.

Meanwhile the detectives and the Captain are stumped about the killer’s motive, it’s only Hank who suspects the killer may just be Wessen.

Over at Monroe’s where Nick has been staying since “the break up”,  he gets a phone call from Brody’s former boss about a possible suspect, Jenna’s ex. The scene is cut away to a man’s back surrounded by computers  in a dark windowless room. Is this Jenna’s ex? Is he the killer?

When Nick and Hank go to question the Ex , he informs them that he has an alibi and also that Brody gaming avatar was killed in the game the exact same way he died in real life. It’s revealed, thanks to Sgt. Wu, that the second message connects to the Namesless avatar. Which gives the big break, all they have to do is watch the killer in the ame and see who target next.

No longer afraid of her hallucinations, Juliette finally confronts the ghostly Nick. She’s sees he/ it is trying to tell her something but the words aren’t coming through. Taking her new found information she goes to Rosalee and Monroe’s shop asking for help. From what she reveals Monroe is able to guess that maybe Juliette’s memories are coming back. The ones she lost because of Adalind and the evil black cat. She asks both of them not to tell Nick but to come over to the house soo that they could help her decipher what she’s seeing.

Although the detectives thought they had a fool proof plan to capture the killer, he does manage to kill again without getting caught. Yet right afterwards the killer calls Jenna to ask if she’s guessed his name. The cops do arrive at the newsest victim’s house only to find a dead body and another cryptic message. A Sudoku puzzle with a knife in it and  the words “Guess My Name”.

Later at her impromptu dinner party, Juliette has visions of Nick looking over Wessen book. Is she remembering Nick telling her about the Wessen? If so will she remember seeing Monroe’s true face?

As the police question Jenna, Sgt Wu has really stepped it up, finally figures out the messages all connects to a certain date. Jenna remembers and is able to tell the cops about an IT guy. She tries to play off the killer’s motive as guy getting jilted but Wu is able to see through her. The mysterious IT guy was the one that wrote the code that Jenna and her friends took credit for. The cops ask her for description or even name but Jenna remembers neither.

Describing what she saw in the visions to Rosalee, Monroe unknowingly voices the connections to Aunt Marie’s trailer. Juliette tries to get more information only to be stonewalled by Monroe. She begs him to help her because she needs to remember Nick.

Using Jenna as bait, the cops send back into the game. She finds “Nameless” and after taunting him, kills his avatar. Flipping out over his loss, the killer track down Jenna’s location and finally reveal his real face. Morphing into  the Green Goblin’s twin, he breaks into Jenna’s apartment and is confronted by the police lying in wait. He alludes them by nearly killing Wu but trapped on the roof by Nick and Hank. Refusing to loose, even then, he jumps off the roof killing himself. His Green Goblin Laughter following him all the way down to the comic book SPLAT!.

Capatain Rennard meets with his contact and is informed about a coup happening in the Wessen world. Discussing possible scenarios, Rennard discovers a bomb at the their restaurant.  Managing to make the bomb without casualties he then chases down the culprit. Rennard is able to kill the would be assassin and take the man’s passport. If it’s real, which be incredible dumb for a killer, then the French have entered into Political games. Still the night isn’t a complete bust Rennard takes the info from his man and deciphers it into revealing a list of names.

Returning home tired and weary, Nick is confronted by Monroe telling him he’s going to take Juliette to the trailer. She plans on leaving Portland if he doesn’t.

Next week on Grimm, Adalind returns but she seems to have runn into trouble with men holding her down and coming at her with equipment. Is it because of her pregnancy. If so who would harm her. Is it Rennard or his brother?