BY Kristine Francis on May 7, 2013 | Comments: one comment
Related : Grimm, Recap, Television 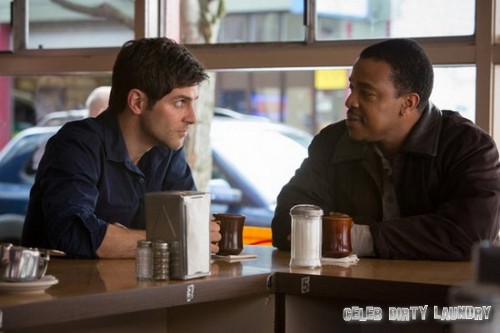 Tonight GRIMM returns to NBC with a new episode.  On tonight’s show called, “Kiss of the Muse,” Nick must find a way to get close without losing himself in the process. Juliette (Bitsie Tulloch) arranges a dinner date with Nick in the hopes of clearing the air, but their plans go awry as the case intensifies.  Did you watch last episode?  We did and we recapped it HERE, for you!

On last show, mysterious cow mutilations and reports of glowing creatures put Nick (David Giuntoli) on a case that forced him to question the existence of aliens within the Wesen world. He also met a strange UFO expert who seemed to know more than he was letting on. Meanwhile, Nick dug further into the key, and Juliette’s (Bitsie Tulloch) romantic memories of Nick started coming back in a big way.

On tonight’s show Nick (David Giuntoli) discovers a muse-like Wesen (guest star Nora Zehetner, “Heroes”) with the ability to influence those she gets close to – some with positive results, others with terrifying ones. Nick must find a way to get close without losing himself in the process. Juliette (Bitsie Tulloch) arranges a dinner date with Nick in the hopes of clearing the air, but their plans go awry as the case intensifies. Meanwhile, Rosalee (Bree Turner) takes her first visit to Aunt Marie’s trailer.

Juliette is remembering the cat scratch. She now knows about Nick telling her about a certain witch.

Nick and Monroe are unpacking groceries when Nick gets a call from Hank. When he meets him, he finds out Hank hand an accident on his vacation. Hank isn’t wallowing though he just wants to know what he missed. Before Nick could tell him thy hear gunshots. Rushing onto the scene, Nick spots a Wessen pointing a gun on his ex; telling her she’s his.

Nick, Hank, and Wu determine the situation to be a crime of passion. The ex-girlfriend broke up with Anton and started to date a new guy. Her ex has been stalking her but she didn’t file a report. She says she didn’t because men fall for her easily and they don’t want to let go. As she says this seductively she also kisses Nick’s hand.

The guys are investigating Anton. The ex-boyfriend has pictures all over his apartment of Chloe. Wu calls him obsess. They also find a picture of Chloe’s recent boyfriend murdered. Juliette calls Nick while the guys are still at Anton apartment. It’s starting to look like a happy reunion is in their future. Before leaving the apartment it takes a moment for Hank to snap Nick out whatever he was daydreaming about. The daydream occurred when Nick held one of the pictures of Chloe.

Nick goes over to see Chloe for a follow up. He tries to question her about their relationship and finds it a bit difficult. She tells him how she has a way to inspire people. He asked for further information and she demonstrates by kissing him. That’s how her power works. Their passion for her eventually turns into poison and that’s how it ends. She accidentally reveals her true nature by turning into a red headed blue creature. Things could get out of hand but luckily Monroe calls and breaks the Muse’s spell.

Nick forgot about double booking himself for dinner with both Monroe and Juliette. The call reminds him to go over to Juliette because she wants to have dinner and talk.

Anton breaks into a building. He broke into a paint store.

Juliette is trying to apologize to Nick for being distant and the way she was treating him. But all he hears is Chloe inside of his head. Chloe is blocking out all sounds of Juliette trying to reconcile with Nick. With what he wants right in front of him, Nick tells Juliette he has to go.
Back at Monore’s, Monroe thinks that the two are back together only to be disappointed by Nick telling him he left. Nick is being aggressive and defensive. Nick storms off.

Monroe, Juliette, and Hank all speak to each other about Nick’s recent behavior. They’re trying to figure out what’s wrong when Hank tracks down Nick at a bar. When he gets there he notices Nick’s aggression. Especially when Nick punches a guy who noticed Nick’s sketch. The sketch was of Chloe in her true form.

Hank takes the sketch to Monroe and Rosalee. They don’t know what the creature is. The only thing they can do is go to Aunt Marie’s trailer. They find out the Chloe’s kiss is addictive as a narcotic that always ends in destruction and death.

Nick, in the meantime, has already started destruction. He did a breaking and entering.

Hank later finds out about Chloe’s history of dating artist that eventually go insane or end up dead. He brings this up with Captain Rennard.

Rosale and Monroe are trying to find a cure for Nick when Juliette walks in wanting the key to Marie’s trailer. After some persuading, Monroe gives her the key. At the trailer, Juliette is able to recall when Nick explained about the Grimms.

The cops find out what Anton did with the paint. He painted a mural of Chloe on the sidewalk. Newly concerned, Hanks shows the captain Nick’s drawing.

Rosalee and Monroe calls Hank and tell him to keep Nick away from Chloe or it’ll get worse.
Still at the shop, Juliette returns to talk about what she remembered with Monroe and Rosalee. She wants to tell Nick she believes him now but doesn’t know where he is.

Nick is at Chloe’s. They’re going at it. She interrupts him to tell him about Anton being there. She can’t do anything with Nick as long as Anton is alive. They fight and nick nearly kills him but the cops come in and break the two of them up.

Rosalee and Monroe are explaining to Juliette about what is happening to Nick. The only cure there is literally Juliette.

Rennard and Hank are trying to rationalize with Chloe. She can’t stop and she doesn’t want to. Rennard and Hank return to the squad room only to find Nick had drawn a picture of Anton’s death. Rosalee, Monroe, and Juliette arrive in time to help. They race to the cells and Juliette somehow breaks Nick’s curse.

Rennard returns to Chloe but he’s letting her go. All she has to do is to never come to back to Portland or else deal with him. To drive in the point Rennard shows her he’s royal.

In next week’s promo, there seems to be a zombie apocalypse. How is everyone going to cover that one up?