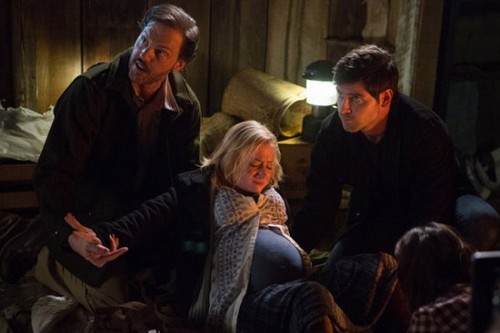 Tonight GRIMM returns to NBC with a new episode.  On tonight’s show called, “Endangered,” Nick digs further into the key, and Juliette’s (Bitsie Tulloch) romantic memories of Nick start coming back in a big way.  Did you watch last episode?  We did and we recapped it HERE, for you!

On last show, the episode began with a curious geologist. She took some pictures of an abnormal rock formation and in her excitement she couldn’t wait to rush back to her car. However she experienced some difficulties when a man came out of nowhere and tried to grab all of her film. She managed to mace him before driving off. Too busy already telling others on her cell about what happened; she didn’t see the “crazy” man’s face morph into a deer. In their quick struggle he told her she hadn’t “shown any respect”.

On tonight’s show Mysterious cow mutilations and reports of glowing creatures put Nick (David Giuntoli) on a case that forces him to question the existence of aliens within the Wesen world. He also meets a strange UFO expert who seems to know more than he’s letting on. Meanwhile, Nick digs further into the key, and Juliette’s (Bitsie Tulloch) romantic memories of Nick start coming back in a big way.

Nick at the trailer. He needs to find out what the key unlocks.

Elsewhere a man comes on a cow that was gutted. He runs to his vehicle to get his weapon but is unable to fire before blue illuminated man kills him. The creature is running away when he accidentally leaves some DNA behind.

Monroe and Rosalee are having some quiet time but Monroe is worried about his parents coming to visit. He can’t have his parents, who are still hunting, around his friend the Grimm. Rosalee is making suggesting in order to help him when things begin to heat up between them. It could have gone further if Nick hadn’t interrupted.

He’s finally ready to get Monroe’s help on the mysterious key. It takes him a moment until he realizes he put a stall to whatever Monroe and Rosalee were doing. So quickly makes an exit. Rosalee feels bad because she knows Nick needs Monroe so she gets a rain check before leaving.

Nick is able to show the key and map to Monroe. He doesn’t know anything about the key but he understands the map. He’s able to place the location in Germany. Suddenly Monroe is curious over what Nick is searching for. Apparently it’s a mysterious object from Constantinople that some Grimms had hid out of fear it was too powerful.

The blue creature meets up with his pregnant accomplice. He is able to morph back in a human form. Yeah! But he was almost exposed getting food for lady love so they have to find another location.

Nick goes to meet with Captain Rennard. Although reluctant he asks the captain about the key. The captain is tells him a little of the history. The royal family has four and Nick has one. Two are unaccounted four. The key it seems may open the location to nails that nailed Jesus to the cross. Before they could delve deeper, Wu comes in with news of a possible alien life form.

Nick and Wu are on the scene. No one can believe the witness when he says he saw an illuminated man. The boys going investigating and succeeded in finding a blue lizard skin attached to the fence. They’re leaving the farm when a man begins asking them about the “alien”.

The blue creature leaves his lady alone for a while. He went out to either steal a woman’s car or kidnap the woman. Its ok he just knocked her out. He and his girlfriend now have wheels.

The medical examiner examined the sample and shows Nick that it illuminates when the animal who is usually agitated. Nick gets the call about an alien abduction.

The creature and his girlfriend are in the car when she feels something is wrong. After spotting an abandon cabin, they choose to rest there.

Juliette goes over to Monroe. She went to look for Nick but he’s not there. Yet Monroe is and she needs someone to talk to. She tells him she remembers a moment four years ago. He’s thinks it’s a good thing however Juliette is worried that she pushed Nick too far away these past couple of weeks. Also she doesn’t feel like the same person she once was. Monroe is calming her down when she asks about a Grimm. She wants to know more but Monroe will only say Nick’s different.

The alien hunter isn’t as crazy as he seemed earlier. He’s actually hunting the pregnant creature and he’s not doing it alone. His as of yet unseen partner is getting anxious.

The investigation into the creature continues. Nick is able to see the creature in his grimoire. He has no choice but to bring it to Rosalee. He tells about the mutilated cows and she’s able to decipher that there’s two creatures and one of them is pregnant. Monroe comes and immediately expects bad news. Rosalee instead gives him new that a practically extinct creature is about to give birth.

They all decide to go but can they make it time with the Wessen hunter now having spotted the male?

The trio are on the hunt when they go to hunter’s trailer. They are able to figure out the hunter wants to skin what he finds. They quickly try to find the couple.

The group makes it to the cabin in time to help the pregnant woman in labor. Her boyfriend makes it back and finds Rosalee helping with the birth. The Hunter comes in with his gun cocked immediately after the birth but he didn’t count on the three extra guests.

They’re able to kill the hunter but what to do with him now. It’s stuck in its true form for a while. So they leave to the squat team to find it. The poor tem gets there and are frightened by what they see. Only for seconds to pass the dead thing to revert back to human. Will they dismiss what they saw or ask for an autopsy?
Nick lets the couple and new baby go. There a safe haven for their kind in Alaska.

On next week’s episode, Nick is drugged into an obsessive love. The only one who could help is Juliette. But will she?