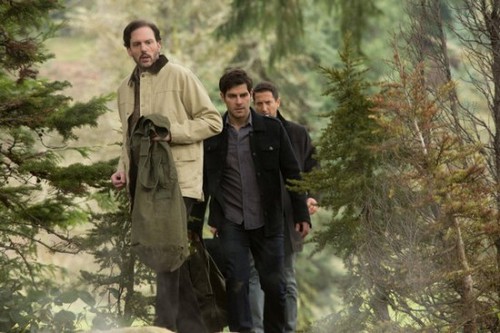 Tonight GRIMM returns to NBC with a new episode.  On tonight’s show called, “Ring Of Fire,” Juliette (Bitsie Tulloch) seeks out help after becoming overwhelmed by the latest side effect of her recovery – multiple memories of Nick showing up everywhere.  Did you watch last episode?  We did and we recapped it HERE, for you!

On last show, While on jury duty, Rosalee  tasked Nick, Hank and Monroe to help stop a defense attorney from using his particular “Wesen wiles” to overturn what should be an open-and-shut murder case. Back at the precinct, Captain Renard (Sasha Roiz) brings Nick and Hank in on his own recent dealings with the Verrat, to keep them on their toes. Meanwhile, a return to the trailer brings a flurry of memories of Nick rushing back to Juliette.

Back from hiatus, tonight’s episode begins with a curious geologist. She took some pictures of an abnormal rock formation and in her excitement she can’t wait to rush back to her car. However she experiences some difficulties when a man comes out of nowhere and tries to grab all of her film. She manages to mace him before driving off. Too busy already telling others on her cell about what happened; she doesn’t see the “crazy” man’s face morph into a deer. In their quick struggle he told her she hadn’t “shown any respect”.

At the poilice department; Hank is going on vacation. He’s anxious over leaving Nick alone but after some peer pressure; he does leave.

Juliette is still seeing her memories of Nick. Yet seeing them all at once has driven her from the house. Only for her to keep remembering him in the car. Too strung up for her to think rationally; Juliette gets into a car accident.

Over in Austria, Adalind is some really bad morning sickness. She gets a knock at the door from her mysterious friend/ally. The friend  tells her to get dress. They have a meeting with a major league player. At first, Adalind doesn’t want to go. She’s not feeling well. But her friend tells her this is the only way they’ll find out the true value of Adalind’s baby.

Nick gets to the hospital to visit Juliette. After thinking he was another memory, she’s so relieved that he’s real that she tells him that she can’t see him anymore. She’s going crazy from whatever Nick “and his friends did to her”. So he says goodbye…again.

The geologist finally arrives home. Immediately her house has an earthquake, but the geologist quickly dismisses it.  Still she can’t dismiss the sound of someone in her house. She doesn’t last long before fire monster come at her. Goodbye geologist.

Nick and his boys are hanging out watching the game and drinking some beers. Although his friends notice Nick is wallowing about Juliette. His friends tried to help him out but he’s just not feeling it. When he gets the call about a dead body, Monoe tries to cheer him with “it’ll help tke your mind off of her”.

Juliette visits the women that had helped previously with the supernatural.

Nick arrives at the crime scene only to be told it’s not normal. It looks like fingerprints were burned into her but nothing else in her apartment was set on fire. Wu spots her camera. Yet after watching the film they still have no idea to its significance.

Juliette and her friend are talking. Her friend had given her a tea to help. It should help her focus on one memory at a time. Nevertheless there is a downside, she can’t just view the memories anymore. Now she has to go into them.

Adalind and “the ally” go to visit the major figure. Yet things are not as they appear. The Queen has to be sure of the child’s bloodline, so she needs it’s blood. Something Adalind’s ally apparently already knew. Holding Adalind down, they manage to get want they need from one very large knife/needle.

Nick is interviewing the geologist’s coworker. He tells Nick about the incident with the crazy before driving Wu and Nick to the site. They see the mysterious rock formation and still don’t know what it is. But Nick is starting to suspect. After the guys return to the car only to find it vandalized; Nick chases down the horned creature. However after he’s captured, the man tries to warn them that haven’t shown any respect.

The baby’s lineage is verified. Everyone is extremely pleased Adalind didn’t lie and they don’t have to kill her. The bargaining begins but it’s not over money. Adalind wants her powers back in exchange for the baby.

Nick and Captain Rennard are discussing the case. Because the man they captured is Wessen, the guys decide to team up.

Juliette returns to the house and tries to concentrate on one memory. She picks when they moved in together. It was a good memory.

The Wessen tells the guys about the mysterious creature. He tries to warn them that creature wants his revenge. That’s why he’s on the mountain. To warn other people away especially because he couldn’t save his wife. This creature was a priest of Vulcan, the god of fire. Nick and the Captain decide to deal with the creature off the books.

Before they can take action they experience a small earthquake and like the dearly departed Geologist, they ignore it. Wu finds out for them that bad things only happen to people who take rocks from the site. Say like the friendly coworker that couldn’t help but take a sample.

The Geologist’s coworker is fighting with a man on fire when Nick and the Captain come in shooting. The burning man manages to escape through a street grate but at least they know now that bullets can’t stop it.

Juliette finally got enjoy her memory. So much that she forgot that it already happened.

Nick and Monroe are researching the priest. With Captain Rennard’s help, they realize this creature can destroy Portland exactly like it destroyed Pompeii.  The guys manage to win the help of their not-so-crazy horned friend. All four of them go back to the mountain and antagonize the monster.

They plan on luring it to until it’s surrounded by freeze tanks. They’re going to freeze hell over. The earthquake comes first. Mr. Horns was the bait and the creature came calling.  They manage to freeze it into rock. Mr. Horns then smashes it to pieces.

Juliette gets out her engagement ring. She choses the memory of Nick’s proposal.

On the upcoming episodes’s promo, Juliette asks Monroe what is a Grimm. But it may be too late for her and Nick. It’s looking like he met someone.