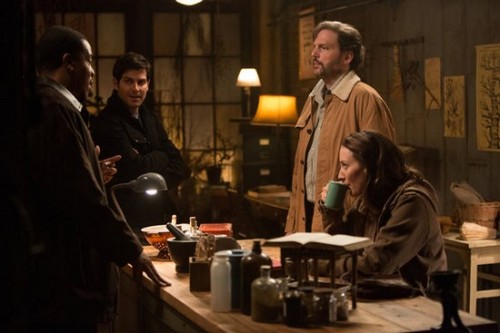 Tonight on NBC GRIMM aired with a new episode called, “One Angry Fuchsbau” and we recapped the show for you. Did you watch last week’s episode?  We did and we recapped it here for you!

On tonight’s show Grimm a seemingly Lion killed a Mouse. The Lion, an abusive husband killed his new wife of 6 months, a Wessen Mouse, after an irrational fight.

At the Lion’s trial, the defense lawyer has begun to use his own special Wessen gifts in order to poison the jurors into believing his client’s wife committed suicide instead of being hurled off a balcony by her husband. But he doesn’t know that one of the jurors also happens to be Wessen, Rosalee. Can the queen of potions and cures really be anyone’s victim?

Monroe and Nick discuss the Juliette situation. Nick hopes it will go better than it did the last time and poor Monroe doesn’t want to be the one labeled crazy this time. Although Monore does show up at Juliette’s door, she never believed he would. She rushes them out of there before he could change his mind.

When they get to the trailer, Juliette remembers being there but that Nick was with her. Entering the place, she remembers Nick looking at the Book. Still she’s confused enough to think Aunt Marie was more than a collector despite Monroe trying to claim so. Juliette is investigating when one by one she remembers Nick explaining the Wessen world. The memories start to crowd her until, frightened, she flees the trailer. Monroe tries to comfort her but she refuses and wishes to go home.

Monroe returns to Rosalee’s only to find her sick with a headache. She explains how she started to get sick in court and feeling better the further she got away from there. Monroe agrees to drive back tomorrow. Now with his free time Monroe goes to find Nick and update him on Juliette.  Nick, worried, wants to talk her. Monroe tells him to let things play out instead of pushing her.

Back in court there is an eyewitness to the murder. She tells the court what happens and then she’s questioned, unluckily, by the defense. He manipulates her memory into believing his side of events. The judge allows the witness to change testimony yet Monroe is starting to suspect the lawyer. Following him to the bathroom, he walks in on the lawyer eating  frog in one of the stalls. Monroe knows what he is now.

At Police headquarters, Captain Renard is investigating his attempted assassin. Pulling in Nick and Hank into the investigation. Before they question each other over whether they can trust Rennard, Monroe calls about jury tampering.

Nick and Hank show up just when Wu is being questioned on the stand. The guys can see how the lawyer confuses Wu into changing his story. Believing in Monroe now, all he can say “It’s the toad”.

Last year they had met another of the lawyer’s kind. When that particular Wessen creatures eats toads, it heightens their power of persuasion.

Rosalee returns to the store to find the guys waiting for her. They explain the Wessen manipulation and how they need to stop him. Just for Rosalee to tell them that deliberation is tomorrow. Looking into all their files, Rosalee finds a pheromone vasectomy, too bad it needs a hard to find ingredient. Well, until that ingredient falls right into their trap. Monroe transforms into his true form to run down the lawyer. The lawyer’s sweat is easily contained with the help of a friendly beaver offering the frighten man a handkerchief.

The next day, Nick and Hank find the lawyer to question him over last night. As the guys distract him, Monroe goes in hunt for the toads. Regrettably he finds two toads but only has one dose.  Monroe chooses a toad just to loose it when the slippery little thing makes a run for it.  He catches the toad and injects it with the vasectomy. Hopefully he chose the right toad.

At court the lawyer still has some of his mojo. Is it strong enough to affect the jury?

Adalind returns to her boss to inform him of the bad news. He’s not angry but he does notice something different about Adalind. He asks her about her “glow” and she shifts to the conversation by saying it’s coming from being with him.  When is she going to mention her pregnancy much less the paternity question?

Worrying about if he picked the wrong toad, the verdict comes in. Guess Monroe did because the Lion has been found guilty of first degree murder. Celebrating over the victory, Monroe goes to answer the front door of the shop merely to find the lawyer asking for help. Before Monroe can divert him, Rosalee comes out. Recongising her, the lawyer thinks its her fault and tries to attack her. The noise of Monroe attacking the lawyer brings out everyone from the back including the beaver. The lawyer now knows it was a group conspiracy. Still he can’t do anyting about because Nick brings him in for assault charges. Guess who happens to share the cell next to him. Yup, non-other than the Lion.

After receiving help from woman who knows about her curse, Juliette is no longer hiding from her memories. Even though it still scares her to see several memories of Nick bombard her at the same time.

What will happen next week? Will Juliette finally get a hand on her memories? Will Adalind ever tell at least one of the princes her news? I guess we’ll see in two weeks.