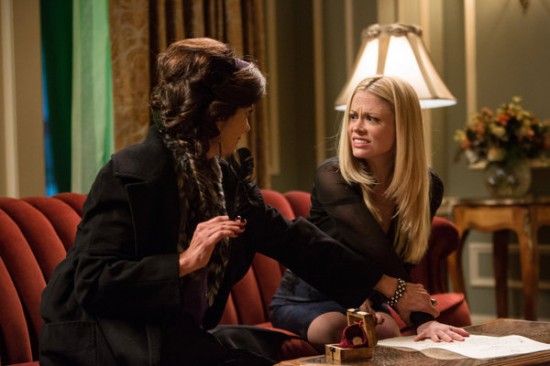 Tonight GRIMM returns to NBC with a new episode.  On tonight’s show called, “The Waking Dead,” Juliette (Bitsie Tulloch) insists Monroe (Silas Weir Mitchell) share with her Nick’s darkest secret – the world of Grimms and Wesen.  Did you watch last episode?  We did and we recapped it HERE, for you!

On last week’s show Nick (David Giuntoli) discovered a muse-like Wesen (guest star Nora Zehetner, “Heroes”) with the ability to influence those she got close to – some with positive results, others with terrifying ones. Nick had to find a way to get close without losing himself in the process. Juliette (Bitsie Tulloch) arranged a dinner date with Nick in the hopes of clearing the air, but their plans went awry as the case intensifies. Meanwhile, Rosalee (Bree Turner) took her first visit to Aunt Marie’s trailer.

On tonight’s show Nick (David Giuntoli) and Hank (Russell Hornsby) discover a new kind of strange when they investigate suspects being found dead – for the second time. In Europe, Adalind (Claire Coffee) finds herself in the middle of a feud between Frau Pech and Stefania (guest star Shohreh Aghdashloo ) while working over the details of her pending transaction. Meanwhile, determined to remember every last detail to get things started once more, Juliette (Bitsie Tulloch) insists Monroe (Silas Weir Mitchell) share with her Nick’s darkest secret – the world of Grimms and Wesen. Sasha Roiz, Reggie Lee and Bree Turner also star.

Adalind is in Austria doing her best to seduce Rennard’s brother. However their romance is interrupted by a call from the King. Adalind is never one to miss an opportunity so she listens on the call. The royal family is plotting but the ending of the conversation seems to be the King warning his son about Adalind. Rennard apparently was a result of the king’s affair with a witch so the King knows what he’s talking about.

Nick is finally reunited with Juliette. Especially after the way she saved him last week. Although the couple aren’t rushing things. They wish to start out slow by trying out just a dinner again before seeing where it goes.

A wolf like Wessen is on the rampage in a home. There’s an unconscious woman lying on the floor. Wu and another officer are called on the scene. When they enter the house, immediately notice the woman but the assailant appeared to have fled the scene. At least that’s what they thought until the creature came out of hiding to attack them. It showed it’s human form but with animalistic sounds before the cops manage to kill it. Now they have to try and comprehend not only what they heard but also the fact the body is bleeding green blood.

Adalind is negotiating for her powers with her baby. She’s given a mysterious contract she can’t read or in any way understand. She doesn’t want to sign it but is forced to. As the Romany queen leaves, Adalind’ s advisor catches sight of her. The advisor later confronts Adalind. She doesn’t want to be cheated out any deal that’s brewing. Anyway she tells Adalind if anyone were to find out about the pregnancy; Adalind may be worth more dead.

Back at the scene, Wu shows Nick and Hank the body. The green goo is easily explained away. The cops on the scene this it’s a side effect from a new drug . Right when the guys are leaving, Nick notices an oddly calm man watching him. Nick thinks nothing of it and continues back to the office. The guys are researching the two bodies when they find out they’re suspect supposedly died three days ago.

The Medical Examiner believes the coroner simply made a mistake or it’s a case of mistaken identity.

Juliette goes Monroe. She wants to know what he wanted to show her before her coma. Their beaver friend is also there. He’s curious about what Juliette needs when Monroe tells him. He’s freaking out but Monroe assures him Juliette pretty much knows everything else. Bud thinks it could scar her for life so he tells them to not do anything without Rosalee. So Monroe ropes him into their trip to the shop.
Nick and Hank go to the hospital but everything points to it being the same man. They’re leaving when Nick notices yet again the same man in the top hat. He races to catch him but the guy disappears.

At the Spice shop, despite Bud’s nerves Rosalee agrees with Monroe. Rosalee however doesn’t believe Monroe should go first. She also should give Juliette some background. Rosalee shows Juliette her true face. At first Juliette storms off but she does quickly turns around to come back. She now wants to know what the guys are. Monroe and Rosalee volunteer Bud next. He unconsciously does and is a little happy it wasn’t that bad. Now its Monroe’s turn. After being comforted Nick isn’t one of them she now needs a drink.

Adalind calls the gypsy queen to tell her about her “friend’s” warning. The queen says she’ll handle it. Nevertheless when the calls ends, the queen freaks out over the threat. A good thing too, because the witch is across town, contacting the royal family. She wants to sell information about the baby to them.

The assistant the witch notified doesn’t go to the family with her deal but to Rennard. Rennard wants to make a counter offer.

The mysterious man sets a trap for a car mechanic. He turns into a blowfish creature that spits out green goo into the mechanic’s eyes.

Nick and Hank are able to identify the man from the grimoire. He’s a voodoo deity. He has special talent for making zombies. Unbeknownst to them, the deity isn’t stop with only a handful. He goes on the bus and infects everyone onboard.

There’s more trouble ahead for Portland. Rennard’s brother, Eric, has just landed. He also went to a great deal of trouble to keep it secret. Not even Rennard’s spy knew. But the spy will investigate matters for Rennard.

The Voodoo god has locked up all of his creations. He has something planned with his little army.

Bud, Monroe, and Rosalee tell Hank and Nick about what happened with Juliette. They reassure Nick that Juliette was ready. She seemed ok with everything. They think the couple will discuss later at their dinner.
Juliette is a little nervous. She doesn’t want to obsess over anything and merely focus on the dinner. When Nick gets there, all he wants to know is if she’s really ok with it all.

Prince Eric is at his hotel room when he’s visited by the Voodoo God. They’re friends…

In next week’s promo, the zombie apocalypse has arrived. How will the Grimm fix all of the sudden exposure? Also Juliette doesn’t want to sit on the sidelines anymore. She wants to get involve in Nick’s business.