Gwyneth Paltrow Felt Up Random Dude’s Genitalia To Make People Like Her – Pathetic or Disgusting? 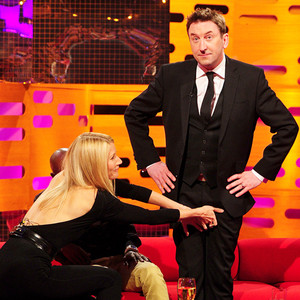 Gwyneth Paltrow is trying to make up for being named one of the Most Hated celebrities in Hollywood by grabbing a guy’s junk. Did it work? Do we like her again?

Gwyneth has been busy promoting Iron Man 3 all over the world, and she was most recently on Graham Norton’s talk show in England. By the way, Graham Norton is hilarious and anyone who doesn’t watch his show should start watching asap.

With that being said, his show is quite different to most talk shows in the US. In Graham’s show, he brings all the guests for the night in at the same time, and they have to [GASP] interact with each other on the same couch. As you can imagine, it doesn’t necessarily work for celebrities with big egos. However, Gwyneth here seemed to get along with the other two guests like house on fire. 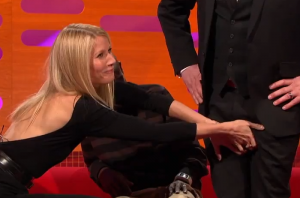 That wasn’t the biggest shock though. No, the biggest shock came from the moment where Gwyneth ended grabbing one of the guests’ junk and feeling him up in front of a live audience. The audience, Graham, and the other guests were all howling with laughter and joy, and Gwyneth actually seemed like a laid back, cool kinda gal – for that moment. Of course, all of that vanished once she started it on the British accent and how she doesn’t want her kids to grow up with it, and how Pasta sounds weird when British people say it. Sure, she said it as if she was joking – but the fun moment of junk grabbing vanished as soon as she started her sanctimonious speechifying.

So yes, Gwyneth grabbing a stranger’s genitalia certainly worked to her advantage and made her seem fun – for a moment. However, judging from the live audience’s reactions, she’s won them over – which means she’s just sold another 100 copies of her cookbook, as Bohomoth hilariously stated. Well played, Gwyneth, well played.