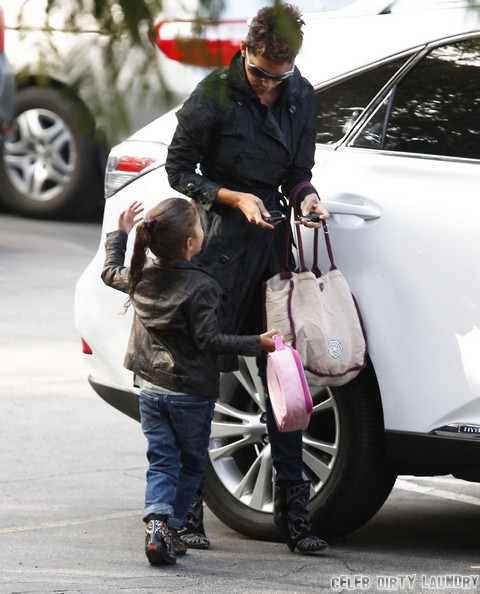 Halle Berry’s relationship with Olivier Martinez is starting to turn sour, according to reports. The actress and her boyfriend have been living apart from each other as Olivier tends to spend more time in France than in Los Angeles with Halle and Nahla. Martinez loves Halle but can’t see himself living in America for the rest of his life – he had hoped that the judge would allow Nahla to move to Paris with him and Berry, but those plans didn’t work out.

Gabriel Aubry was totally against the idea of having his daughter move all the way to Europe while Halle as her mother claimed the paparazzi in LA are too aggressive towards children and do not allow parents the privacy they deserve when they are spending time with their kids; whether she’s picking Nahla up from school or just enjoying a day out, the photographers always tend to get too close to her which she says is something she struggles with.

Sadly, the judge denied her from moving to Paris because he reason wasn’t valid; she could always move to another state. Along with this came another blow on Thanksgiving day when Gabe and Martinez got into a heated argument before Olivier beat the living daylights out of the French-Canadian model, leaving him bruised and battered. Sources say that ever since the judge refused Halle to move to France with Olivier, Martinez has been painted as the bad guy in the whole custody battle drama.

He’s tired of being misjudged by the American media which is why he tries to fly back to France as much as possible, leaving Halle on her own in Los Angeles. “Olivier is not happy,” says the source. “He feels demonized by the American media and as if he’s been painted as the bad guy in the custody battle with Gabe when he’s actually the good guy and been a tower of strength for Halle during a difficult time.” It’s only a matter of time before Olivier makes it official and leaves Halle for good, but he’s still trying to see whether he’s feelings on living in America can still change: “He’s agreed under duress not to move back to Paris so there wouldn’t be a long drawn out custody battle.

“But he still wants to move back to France. And the more he talks about spending some time there on his own, the clingier Halle becomes. Olivier is in a difficult situation where if he leaves her he’s a bad guy and if he stays he’s still a bad guy. The feeling in Paris is that he’ll be back in France by summer and that they’ll eventually call the engagement off and split later this year.”

Do you think Halle will stay with Olivier?  Will he stay with her?  Men seem to grow to despise Halle in fairly short order, why?