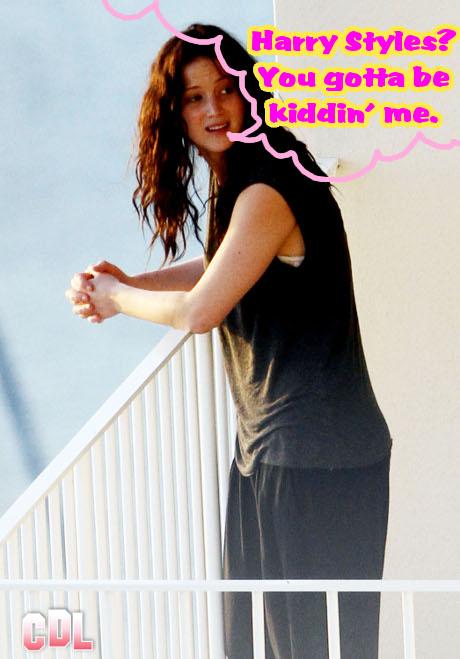 Harry Styles is apparently in mad hot love with Oscar-winner Jennifer Lawrence, and he can’t help but think, like most people in the world, that she’s a beautiful person. He loves himself a quirky, goofy girl, and after Jennifer Lawrence’s Oscars speech Harry Styles found himself falling head over heels in love — just like Jennifer fell head over heels trying to scale the Oscar stage. During the night of the Oscars, Harry released a tweet saying, “Jennifer Lawrence needs to win an Oscar tonight.” Well, apparently his good luck charm worked because she ended up taking home the gold statue for Best Actress. Maybe this is a sign? Have the stars aligned?

For some reason I can’t exactly see Harry Styles and Jennifer Lawrence joining forces, but if they did they’d be the next biggest Hollywood couple and could, quite possibly, take over the world with their crazysauce fanbases.

The Daily Star reported the following: “He fell in love with Jennifer after watching her speech at the Oscars. Harry likes goofy girls and thinks it’s hilarious that she fell over as she went to accept her award for ‘Best Actress’. And obviously, like most men, he thinks she’s drop-dead gorgeous,” a friend tells the paper.

How would you feel about a StyleLaw forming? Or perhaps a HarryJen? Or maybe a JennSty? Yikes? If their names don’t go together well then they sure wouldn’t make a good Hollywood couple. Unless one of you out there can come up with a better name for this theorized celeb couple, then I’m just going to have to say that this simply wouldn’t work out.

But . . . . Don’t you think the possibility is out there? Both are young. Both are *probably* *maybe* single. Might just be the perfect moment for these two successful celebs to unite!