Jennifer Lawrence Pimping Bradley Cooper Out To Her Friends -To Get Him Away From Her? 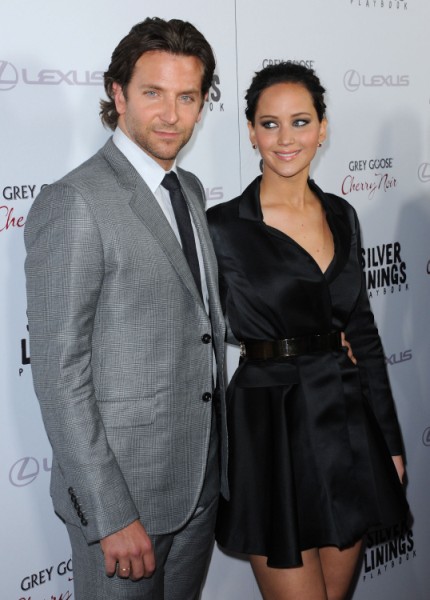 So she’s going to follow up her Oscar winning role by playing matchmaker? Jennifer Lawrence and Bradley Cooper were super chummy during the awards season causing many to wonder if they were mixing some business with pleasure. I had my doubts only because of the huge age gap and the fact that Jennifer just got out of a two-year relationship with Nicholas Hoult. Bradley didn’t seem her type. But Harvey Weinstein was campaigning for that Oscar so I’m sure they were encouraged to be extra friendly for the cameras if you get my drift. But now Jennifer is finally speaking out about their relationship and, in usual adorable Jennifer style, is giving it to us straight.

She told MTV: “My publicist told me that a magazine was going to say I was having a thing with either [The Hunger Games: Catching Fire’s] Sam Claflin or Bradley Cooper, and I got to choose. And I chose Bradley Cooper because I love Sam’s fiancee [actress Laura Haddock] so much. Sam is so sweet. So sweet that he’s almost not hot anymore…. I feel like all I’ve been doing lately is setting him [Bradley] up. I was like ‘You know what? I’m gonna save time and just get a booklet with pictures of my friends. You just go through and pick them up because this is getting exhausting.'”

So People’s former Sexiest Man has resorted to fundamentalist Mormon ways to get a girl. Does this finally satisfy the notion that Bradley Cooper is an uber dork? He’s a cute dork but still a dork. I hope he’s taking notes from all his time hanging out with Leonardo DiCaprio.

Can you imagine Jennifer Lawrence pimping out her friends though? I can picture her being super bossy but hilarious about it. I doubt any of her friends are like Zoe Saldana so I’m sure they all eat solid foods and smile on occasion which would be good for him. Still… I can’t help but think Bradley will play along but it’s the real deal he wants. He’s probably just as in love with Jennifer as the rest of the world is. I don’t care if he is old enough to be her father. He’d go there if she let him. Luckily, she’s not. I still have hopes for Jennifer/Nicholas 2.0. They’re going to film the X-Men sequel soon so there’s definitely a chance!

Do you think Bradley is pining for Jennifer or have they always just been friends?