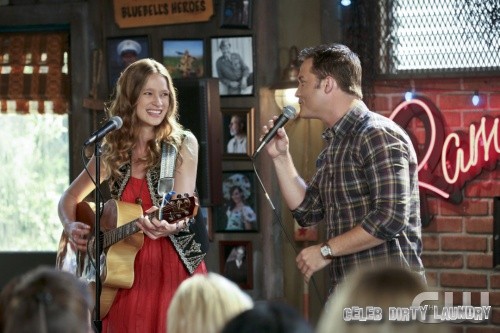 Tonight on the CW HART OF DIXIE returns with a new episode called, “On the Road Again.” On tonight’s show When Lemon (Jaime King) promises that the Rammer Jammer will be having a special concert with the band Gloriana, she must scramble to make it happen, with the less-than-enthusiastic help of Wade (Wilson Bethel).  Did you watch last week’s episode? We have a full and detailed recap here for you!

On last week’s episode Zoe’s attempted at online dating hit a few snags until Rose and Max took matters into their own hands and play matchmaker. Faced with yet another set back with the Rammer Jammer, Lemon and Wade were close to throwing in the towel. George tried everything he can think of to prove to Tansy that they belong together, but she still had her doubts. Brick and Shelby decided that they might have acted too rashly, which forced them to make a difficult decision about their future together. Meanwhile, Lavon refused AnnaBeth’s (guest star Kaitlyn Black) help in stopping the feud with the competing town’s Mayor, leaving her to take a different tact.

On tonight’s show After having a rough time in BlueBell, Zoe (Rachel Bilson) decides a little time in New York City might be the perfect opportunity to give her some much needed perspective. But a medical emergency on the plane forces her to complete the trip with an unexpected companion. George (Scott Porter) struggles with his constant relationship misfortunes, until he runs in to Lily Anne (guest star Amy Ferguson), who helps him with his heartache.

When Lemon (Jaime King) promises that the Rammer Jammer will be having a special concert with the band Gloriana, she must scramble to make it happen, with the less-than-enthusiastic help of Wade (Wilson Bethel). Meanwhile, Lavon (Cress Williams) discovers that the opposing town’s Mayor has stolen something dear to him and enlists the help of the townspeople to get it back. Tim Matheson directed the episode written by Leila Gerstein and Len Goldstein

It’s the morning after for Zoe and Wade. She’s already regretting it and that’s before George walks in. Even Wade has to say it. George has terrible timing.

Lavon and Anabeth are enjoying their breakfast and worried about the pet alligator Burt Reynolds. The reptilian is missing.

Lemon and Magnolia are at the restaurant. Neither know that their father has eloped only that he’s on a romantic getaway. Instead Lemon is dealing with a coup by her charity league. In order to impress the friends/snobs she lies about booking a hot band. Now it’s up to her and Anabeth to fix it.

Zoe is also at the Rammer jammer when she hears about Tansy throwing George’s stuff out of her trailer. She races over to George to find out why exactly he came to her place. Unfortunately George seems to have changed his mind about the Zoe problem. He tells her that the person she actually cares for is Wade.

Zoe seeks advice from Lavon but she is intruding on him and Anabeth. He tries to help her by telling her to take a step away. But she’s too caught up in her crazy to take their good advice.

George is questioned over what will happen with him and Zoe but he storms off. When Wade is asked the same question, he simply says “ No Comment”.

After some time, the idea of escape is starting to look appealing. Especially when Wade may be trying to wiggle himself back into a relationship with her. She’s taking a trip to New York for a wedding to think her life over. Her trip however is already on bad foot when her next door passenger asks what’s wrong with her that she has to seat at the singles table.

Lavon is convinced the Fillmore’s Mayor stole his alligator so he assembled a committee to steal his pet back. He’s just hasn’t told Anabeth his plans.

Lemon and Wade are on a trip to find and book the band. Using her own brand of power, Lemon finds out all that had occurred between Zoe and Wade. Meanwhile on the flight to New York, the pilot makes announcement for a doctor and Zoe finds out she isn’t the only physician on the plane. Jonah Breeland is on her flight.

Both doctors work on an unconsciousness man. Working together they manage to get the man breathing again.

The search for the bad keeps getting forestalled by bathroom breaks. Wade tries to take out his feelings on Lemon but she isn’t having it. She convinces Wade that he’s a better man for knowing Zoe and that he isn’t the jerk he was a couple of years ago.

George is trying to forget or better yet drink all Zoe thoughts away when he spots on her on TV. For some reason he now thinks it’s a good idea to write about his heartbreak. Then again he did get this advice from Wade’s crazy ex.

The Bluebelle’s Ocean 11 does find Burt but Burt has made some alligator friends and the group finds themselves trapped. Their plan is in amidst in unraveling when Anabeth finds out about it. She comes to the gang’s rescue.

After learning about Zoe’s rescue, Wade does everything to get to her but Lemon makes him focus on their trip. Until they get in the car and she finds out he’s still going to Zoe.

George performs his break up song and its good. He honestly receives applause after the debut. He did so well that he gets an offer to sing a band over the summer.

Wade and Lemon enter a restaurant for another break and catch Jonah and then Zoe. By the looks on Wade and Lemon’s faces, they believe they walked in on something between the doctors. They’re quickly reassured although Lemon does spot a certain interest in her cousin for Zoe.

Wade tells Zoe he wants her back. She tells him she needs time and that she took a summer job in New York. They’ll see how it goes in 3 months.

The Rammer Jammer is packed. Lemon is about to make apologies when she finds out the band made it anyway. Everyone is enjoying themselves when Lemon tells Lavon how happy she is for him and Anabeth.

Zoe finally makes it to New York. She’s tempted to call Wade when Jonah shows up to escort her to the wedding.

What will happen next season? Is this really the end between the love triangle we’ve all come to love. Say it isn’t so. Did George take the job? Will anything happened between Zoe and Jonah? So many questions that won’t be answered until September.