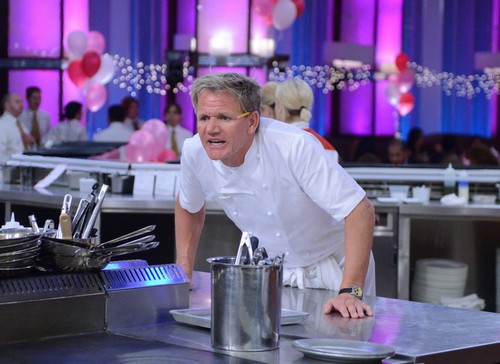 Tonight on FOX our favorite Chef Gordon Ramsey returns with a new episode of HELL’S KITCHEN called, “13 Chefs Compete” On tonight’s show Chef Ramsay raises the stakes on steak night. Did you watch last week’s episode?  We did and we recapped it here for you!

On last week’s episode in the farm fresh challenge, each member from the Red and Blue teams had to enter an animal pen to determine which type of protein they would cook in the team challenge. Chef Jon Shook (Animal, Son of a Gun)  judged alongside Chef Ramsay to determine which team would go on a VIP trip to an aquarium and which team would stay behind to clean and feed animals for the HELL’S KITCHEN’s petting zoo. Pressure mounts during Family Night dinner service as the contestants had to not only impress the regulars, but Chef Ramsay’s family, as well. In a lopsided dinner service, one team soared while the other.  By the end of the show the person leaving Hell’s Kitchen was Dan, his time was done.

On tonight’s show in anticipation of Steak Night at HELL’S KITCHEN, Chef Ramsay challenges the Red and Blue teams to create five beautiful steak dishes. Each team member selects one cut of meat and goes head-to-head with an opposing team member. The winning team earns a day in the sun and poolside pampering, while the losing team must prepare and butcher meat for dinner service. Later, dinner gets off to a rocky start when one diner finds an unpleasant surprise in her dish. Fed up with the lack of communication on both teams, Chef Ramsay sends the teams into deliberation, and tempers flare during another dramatic elimination round.

Tonight’s episode is going to be another drama packed one, which you won’t want to miss. So be sure to tune in for our live coverage of FOX’s Hell Kitchen Season 11 episode 9— tonight at 8PM EST!  Find out whose dreams of winning HELL’S KITCHEN might go up in flames.

The Chef kicks everyone out of the dining room after the elimination.  The women are starting to get arrogant and are thinking that the men are not competition anymore.  They think this year it may be all women with the black jackets.

It is a new morning and all the ladies and men come down stairs to see the Chef.  Everyone sees that Barett has shaved his head and all his hair.

The Chef tells everyone that it is steak night in Hell’s Kitchen.  The next challenge is all about creativity with steak.  The contestants have to take a steak and enhance their meat with a rub.  Each Chef must create a custom rub, they have 30 minutes to cook a medium rare steak.

Some of the Chefs are trying very creative ingredients and I am not sure they are going to work.  I just don’t see banana with steak.  Barret decides to work with black olives with his hanger steak and he is so excited about it.

Filet Mignon – Nedra against Zack – Nedra & Zack get the point.

New York Strip – Amanda against Michael – both lose no point

The Red Team wins the challenge.  The ladies are going to spend their day by the pool where they will have a 365 view of the city.  The Chef has arranged manicures and pedicures for the ladies.

Tonight is Steak night and The Chef is only serving the freshest meat.  A huge side of beef is arriving and for punishment the men (Blue Team) will have to break the side down and prepare each station for service.

The women are excited about their reward and are busy being pampered pool side.

The Men are fed up losing, they know they cannot keep doing this.  The men are trying to regroup but Zack is just going on and on and the rest of the members of the blue team tell him to shut up.

Its Steak Night in Hell’s Kitchen and the Men’s Team are eager to do well.

Susan and Zack will be serving table side.

The Men are already messing up, Barret starts frying crab cakes and no one has ordered them.

The appetizers finally start to go out of the kitchen in the Men’s Kitchen.

The Red Team/Ladies are having a bad start too.  Mary brought her sliders up.  Unfortunately one of the customers find a hair in the sliders and sends it back.  Chef confronts the women and tells them to re-fire them immediately.

Back in The Men’s kitchen they have served almost all their appetizers and are almost on to the Entrees.  However, problems, Barret is falling down on the garnishes, he is totally stressed.  He needs to calm down.

Over in the Red Kitchen, the women are still buried with the appetizers.  Finally Mary’s sliders are passing and the women are finished their appetizers and starting their entrees.  Susan is slicing the Prime Rib and for some reason the Red Kitchen has stopped and Jacqueline tells Chef they are waiting for Susan.  Chef has another meltdown at the ladies.  He tells the ladies unless they give him their best, they should go home.

With Jacqueline back to cooking the entrees are pouring out of the kitchen.

In the Blue Kitchen Chef tells Ray no more Senior moments.  They bring up the New York Steak up.  Chef cuts it in 1/2 and it is raw.  Michael goes over to help Ray.  The steak will take 3 1/2 minutes so they have to dump an entire table.

Chef Ramsay heads over to the Red Team, Mary feels like meat is totally screwing her.   The ladies serve their steak and it is raw.  The filet Mignon is raw and cold.  Chef tells Amanda it is not Sushi night, it is Steak night.  Nedra is frustrated and screams at them.  They give the Chef their re-fire and their is raw too.  Chef throws all four of the Red Team Chefs out of the kitchen.Jacqueline, Amanda, Cyndi and Nedra are gone.  The three remaining women must unite.  Meanwhile, Amanda is feeling like crap.  Jacqueline refuses to be the fall guy.  Nedra is screaming at everyone.  Amanda loses her temper and start screaming back at her.  Nedra and Amanda faceoff.

Over at the Blue Team Michael and Ray hope their steaks are good.

The Red Team are on their last two tables.

The Red Team and Blue Team finally finished dinner service.  Finally a decent service.  Chef tells the Blue team to build on it.  The Red Team lost and Chef says he was concerned their success would go to their head and it did.  The Red Team needs to nominate two people.

The Chef tells Jacqueline that it was her worse performance.

Amanda tells Chef that she is an asset and should stay.  She admits she failed on the meat station.

Chef’s decision is Jacqueline, her time is done in Hell’s Kitchen.