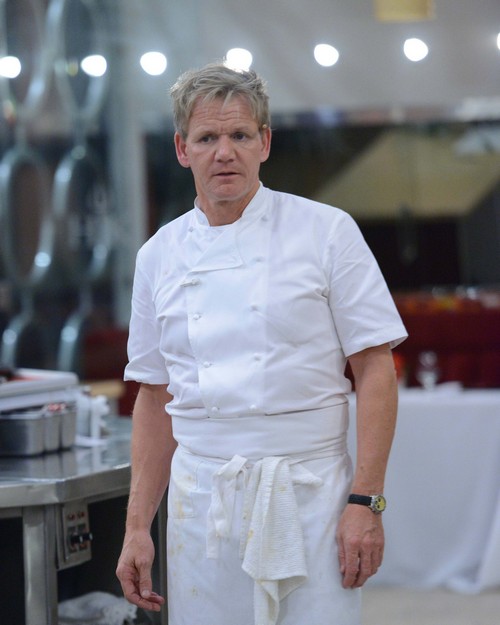 Tonight on FOX our favorite Chef Gordon Ramsey returns with a new episode of HELL’S KITCHEN called, “14 Chefs Compete” On tonight’s show Chef Ramsay put the contestant’s culinary chops to the test.  Did you watch last week’s episode? We did and we recapped it here for you!

On last week’s episode Chef Ramsay challenged the remaining contestants to create six stunning Chinese dishes, was judged by renowned chef Martin Yan. The team with the best dishes earned a day in the sun on the paintball field, while the losing team prepared the tedious and delicate dim sum dishes for dinner service. During dinner service, one team disappointed a VIP guest at Chefs’ Tables after dropping a lamb dish on the floor, while another chef overcooked multiple fish.  At the end of service  the Red Team nominated Jessica, because she was the driver of the fish.  The second nomination is Susan because of inconsistent time calling.  The Blue Team nominates Dan, because he is the weakest member of the Blue Team. The second nomination is Raymond because he had a lackluster performance.  he Chef sent Ray back in line because he thinks he ran the line tonight and he can cook.  The Chef picked Jessica to go home.

On tonight’s show in the farm fresh challenge, each member from the Red and Blue teams must enter an animal pen to determine which type of protein they will cook in the team challenge. Chef Jon Shook (Animal, Son of a Gun) will judge alongside Chef Ramsay to determine which team will go on a VIP trip to an aquarium and which team will stay behind to clean and feed animals for HELL’S KITCHEN’s petting zoo. Pressure mounts during Family Night dinner service as the contestants must not only impress the regulars, but Chef Ramsay’s family, as well. In a lopsided dinner service, one team soars while the other.

Tonight’s episode is going to be another drama packed one, which you won’t want to miss. So be sure to tune in for our live coverage of FOX’s Hell Kitchen Season 11 episode 8— tonight at 8PM EST!  Find out whose dreams of winning HELL’S KITCHEN might go up in flames.

Tonight’s show opens with Chef sending the chefs back to their room after the elimination.  Zach is shocked because Dan was saved.  Dan is thrilled because Chef told Dan he can cook.  Dan gives himself a pat on the back.  Susan is thrilled she dodged the bullet and did not get eliminated.  The Chefs head to bed.

A new day Chef tells the contestants they have an amazing array of ingredients and takes them outside.  They go out side and there are farm animals: goat; turkeys; sheep.  Nedra is terrified.

One member from each will jump in the pen with the animals and take an animal and place it in another cage.  The animals they get into the cage will determine the protein they are working with and the label on the cage determines the starch.  They have 10 minutes to do.  At Nedra’s turn she is paralyzed with fear and slows the Red Team down.  The Blue Team rushes through the challenge.

Chef is not judging alone, he has invited the best new Chef in the Country, John Shook.

Fifth point goes to the the Red Team.

The Red Team wins the challenge.  The ladies win and Janelle had the best dish.  Chef decides to taste Dan’s dish that his team rejected and it was better than the one they chose.

VIP guests Aquarium of the Pacific, they get a chance to feed penguins and swim with the fish.

The men’s punishment since it is going to be Family Day in the dining room have to put together a petting zoo.   They have to keep them happy, clean them and cook for them.  The men have menus for the animals meals.  During the punishment Dan gets mad at the other men and he swears a lot and takes off his apron and says, he is done!  Hey says his strategy going forward to take care of himself.

The Blue Team are prepping for service and are trying to figure out what to do with Dan.  The Red Team is feeling really good and think they will win tonight.

Tonight is family night, even Chef’s children are in the dining room and they are in the Blue Team’s kitchen.  Chef tells the contestants he expects service to be good.

The Children’s meals will be served alongside their parents to avoid grumpy children.  The Blue Team bring up pizza and it is burned.  Dan is the contestant who did the pizza.  The men are refiring.

Over at the ladies team Jacqueline made her scallops rubbery and Chef is not pleased.  The Red Team has to do the whole ticket over because of the rubbery scallops.

Michael realizes that the Blue Team has to pull it together.

After a rough start both teams have bounced back.

The Blue Team gets the ticket for Chef’s family.  They bring the food up and Chef freaks the cheeseburger that Ray gave him is cold.  The Blue Team has come to a screeching halt.  The burger was for Chef Ramsay’s son.  Finally, the Blue Team’s refires make it out of the kitchen.

Meanwhile the Red Team has finished their appetizers and children’s meals.  Mary leads her team to a success start on entrees.

Over at the Blue Team it is now Barret’s turn to impress.  Barret brings the lamb up to Chef and he starts to have a nuclear meltdown, the lamb is raw.

The customers in the dining room are getting discouraged.

Barret has a successful refire.

The Red Team has finished over 1/2 their dining room.

Over at the Red Team they are on their last ticket.  The Red Teams finish their service.

Chef asks them to go to the Blue Team and help them to get their service out.

On the Blue Team, Barret makes chicken for Chef James’ family table and when he gives it to Chef the chicken is not cooked.  Chef freaks and tells the Red Team to take over.  Chef James’ wife is pregnant and that would not be good.

With the women’s help the men finish their entrees.

Michael rants on and on about how he is embarrassed.  They want to put Barret up and Ray, but then Barret says Dan decides to go up because he is not a Team player.

The Blue Team heads down to see Chef and make their nominations.

First nominee is Barret, based on the raw chicken.  The second nominee is Dan because he could care less about being part of the team.

Dan tells Chef he should stay on the show because he has shown he can cook.

Barret tells Chef he is getting stronger and he is learning.

The person leaving Hell’s Kitchen tonight is Dan, his time is done.