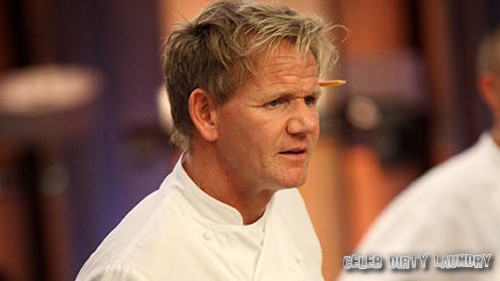 Tonight on FOX our favorite Chef Gordon Ramsey returns with a new episode of HELL’S KITCHEN called, “110 Chefs Compete/ 9 Chefs Compete.”  On tonight’s it’s a double portion of Hell’s Kitchen with twice the backstabbing and twice the disasters!  Did you watch last week’s episode?  We did and we recapped it here for you!

On last week’s episode Chef Ramsay announced that HELL’S KITCHEN would be hosting its first-ever Quinceañera and throwing a party fit for a princess. During the challenge, the Red and Blue teams prepared a tasting menu for their special guest. The winning team earned a fun-filled day at an amusement park, while the losing team stayed behind to transform the restaurant for the party. Chef Ramsay puts the pressure on the chefs to execute a flawless dinner service, but when one chef threw another under the bus, guests were left hungry and dinner service came to a halt. At the end of the evening Amanda went home.

On tonight’s show in the continuation of a dramatic elimination round, Chef Ramsay makes an announcement that changes the competition for good. Later, Chef Ramsay announces that HELL’S KITCHEN will be hosting a very intimate dinner for distinguished members of the United States Army. Then, in another dinner service – one team falters and finds itself in a confrontational elimination round.

Tonight’s episode are going to be another drama packed ones, which you won’t want to miss. So be sure to tune in for our live coverage of FOX’s Hell Kitchen Season 11 episode 10— tonight at 8PM EST!  Find out whose dreams of winning HELL’S KITCHEN might go up in flames.

Tonight’s episode begins with an elimination. Chef Ramsey decided last time that he needed to cut two chef’s rather than one. Barrett was bounced from the competition before the next challenge. Each remaining chef has to choose a dish with 5 ingredients and it also has to be visually stunning. Chef tells the teams that he will take the top 3 dishes from each team and the winning chef will be featured in People Magazine. Jennifer Garcia is the food writer that is helping to judge.

Of course the ladies team wins, they have won all but one of the challenges so far this season. The ladies have won blender’s from Chef Ramsey and a makeover for People Stylewatch.  The guys’ punishment is to clean all of the dorms while the ladies down champagne.

The girls return from their day of pampering and hope to be able to relax a little while longer but that’s not in the cards. Instead Chef Ramsey calls everyone into his office to talk. He tells them that Hell’s Kitchen is closed to the public because instead they’ll be feeding two tables filled with distinguished military. Each chef is responsible for a course and both teams are expected to be serving at exactly the same time. Yeah, that’s a lot easier said than done with these clowns!

They do get the first course of Prawn out together but apparently the serious trouble will start with the second course where Nedra seems to have forgotten how to cook linguine. Over in the guys kitchen Zack decides to mess with Ray and sabotages his lobster. Chef Ramsey freaks out and the lobster goes out two courses late. Steak has been an issue lately too and tonight Susan can’t seem to cook hers. She asked for 5 extra minutes and now needs more time after already holding up the blue/men’s kitchen.  Finally when Susan’s steak is ready they realize that Zach forgot to even make the sauce for his.

Chef Ramsey tells them that they did the military a disservice. Both teams need to choose someone to go home. Nedra and Susan are neck in neck  as are Ray and Zach.  Ray feels that Zach purposely set him up to fail. Nedra defends her ability to cook pasta, in spite of how bad she did on this night. All four plead their case to Chef Ramsey and he eventually bounces Ray. Ironically Ramsey tells him that he respects him before he leaves.

Both teams now have the task of creating their own menu and Nedra and Susan are at odds. Nedra wants to make a gumbo where Susan wants to keep it simple. Zach slept while his team negotiated a menu. Once he woke up the ideas started flowing and he seems to think he wrote the whole menu. His arrogance is pissing off the guys. As for the ladies, they are all multitasking, except for Nedra who is only focusing on her gumbo.  The girls say that it better be the best gumbo ever because it took a ton of prep time.

The guys team does really well and the Chef loves all of their dishes. The ladies on the other hand just plain suck. He is pissed that it took them 6 hours to put crap together. They rework their menu  and it all sounds good on paper. In practice however, the blue kitchen is killing the ladies. Ironically, Zach is making Ramsey happier than anyone else. Until they ruin the sauce for the fillet. It’s stone cold which means they guys kitchen is behind again.  No one keeps it together for very long.

Zach kicks Anthony off the sauce (that sounded funny) and takes over the station himself.  Over in the red kitchen Susan is struggling with the garnish station so Mary starts directing her. Susan lets her babble even though Susan knows how to saute vegetables. Ultimately the girls team is working really well together on this food service. Michael is the best guy usually, I think, but even he is having a bad night. He has ruined the halibut so badly that Chef kicks him out of the kitchen for five minutes.

The ladies team won the service and so the guys have to put someone up for elimination. The ladies celebrate for a minute and then get called to Chef’s office. He wants them to send one of their own over to the blue team. Susan speaks up and wants to go and they all chime in and agree. They end up drawing a name out of a hat and Cindy will be joining the other team.

The guys are split on who they believe should go home. Michael destroyed service today but Zach is the weakest overall. Ramsey is pissed that they couldn’t work together to choose one. Ultimately Michael is sent home and I think it was because he was a threat.

The ladies tell Ramsey that they picked out of a hat to decide who would go to the other team and he flips. Tune in next week to see what happens next week!