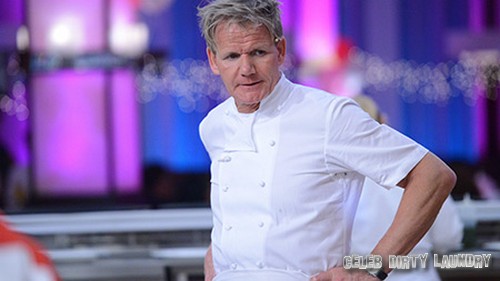 Tonight on FOX our favorite Chef Gordon Ramsey returns with a new episode of HELL’S KITCHEN called, “12 Chefs Compete” On tonight’s it’s the party of a lifetime when HELL’S KITCHEN hosts its first-ever Quinceanera.  Did you watch last week’s episode?  We did and we recapped it here for you!

On last week’s episode in anticipation of Steak Night at HELL’S KITCHEN, Chef Ramsay challenged the Red and Blue teams to create five beautiful steak dishes. Each team member selected one cut of meat and went head-to-head with an opposing team member. The winning team earned a day in the sun and poolside pampering, while the losing team had too prepare and butcher meat for dinner service. Later, dinner got off to a rocky start when one diner found an unpleasant surprise in her dish. Fed up with the lack of communication on both teams, Chef Ramsay sent the teams into deliberation, and tempers flared during another dramatic elimination round.

On tonight’s show Chef Ramsay announces that HELL’S KITCHEN will be hosting its first-ever Quinceañera and throwing a party fit for a princess. During the challenge, the Red and Blue teams prepare a tasting menu for their special guest. The winning team earns a fun-filled day at an amusement park, while the losing team stays behind to transform the restaurant for the party. Chef Ramsay puts the pressure on the chefs to execute a flawless dinner service, but when one chef throws another under the bus, guests are left hungry and dinner service comes to a halt. Frustrated at both teams, each team must nominate two of their weakest links, and Chef Ramsay makes an unexpected decision.

Tonight’s episode is going to be another drama packed one, which you won’t want to miss. So be sure to tune in for our live coverage of FOX’s Hell Kitchen Season 11 episode 10— tonight at 8PM EST!  Find out whose dreams of winning HELL’S KITCHEN might go up in flames.

The opens with the Chef sending all the contestants out of the dining room in disgust.  Amanda talks about wanting to shine, good luck with that.  In the morning the remaining Chefs are reinvigorating.  They meet chef and he tells them when he was young he loved cooking and soccer.  Chef then treats the contestants to pictures of themselves when they were young.

The Chef then sends her a picture of 15 year old Brianna.  They will be hosting the first ever Quinceañera which is a Spanish tradition when a girl turns into a women.  Chef brings Brianna and her family to meet the contestants.  The contestants will have to creating a tasting menu for Briana.  The contestants have 45 minutes to create two dishes for the challenge this week.

The Red Team wins the challenge and the men lose once again.  The ladies have won 7 out of 8 challenges.  Chef congratulates them, he tells them their reward is all about fun.  He is sending them to Knox Berry Farm Theme/Amusement Park.  For a penalty the men will prepare the dining room for the party all the directions etc.  They will be following the directions of the party planner.

The menu are becoming frustrated with all the things they have to do.

The lady are confident with their start.  Amanda brings the tuna to chef and it is all broken, the ladies are frustrated with her.

Over in the Blue kitchen it is up to Anthony and John to finish the appetizers.

Back in the Red Team Amanda’s tuna finally makes it to the dining room.

Amanda brings her next tuna up and it is ice cold.  Nedra’s fault says Amanda because she seared up.  Nedra says she did not.  It is almost an hour in the kitchen and the Red Team is on backlog.

Chef is having a meltdown Amanda and Nedra are fighting.

Meanwhile Brianna has to do a special dance, a waltz they cannot wait any longer for dinner.

Chef is furious he tells them he has never seen such a big screw-up.

Chef is totally pissed off and growls at the Blue Team.  He tells them he wants the rest in 6 minutes.  Chef calls a timeout he wants everyone to taste the Linguini, it is not cooked properly.  Barret messed up.

Finally Barret bounces back and the entrees are leaving the Blue Kitchen.

In the Blue Team  Zack is messing up with the potatoes.  Zack longs for Chef Ramsay’s approval.

Finally both teams are on their last ticket.  The Blue Team messes up again.  Barret brings meat up with a cinder in it.

Two hours into service and two tables have not had their entrees server.

Over at the Red Team the Rib Eye is served by Cindy to Chef totally raw, or as chef said, “Still with the horns on!”

Service is over and Chef tells everyone that it was  painful service, actually embarrassing.

Chef tells everyone the Blue Team and the Red Team will lose someone tonight because the service was so bad.

So each team will nominate two players.

The contestants come back, Chef reiterates how embarrassing service was.

Blue Team nominates Barrett based on his performance, the second nominee was Zack because of his potatoes.

The nominated contestants give justification for why they should stay.

Chef tells everyone he is not happy he wants to send everyone home.

He reconsiders and chooses Amanda to go home.

He tells the contestants that tonight was embarrassing and that is why he is not done.

TO BE CONTINUED NEXT WEEK