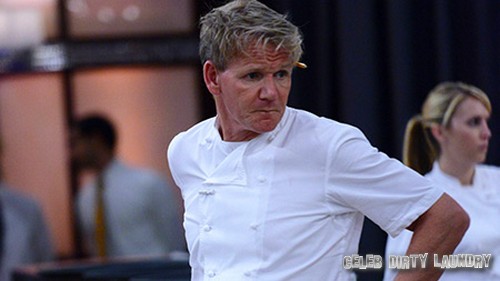 Tonight on FOX our favorite Chef Gordon Ramsey returns with a new episode of HELL’S KITCHEN called, “8 Chefs Compete.” On tonight’s the remaining chefs take on international cuisine.  Did you watch last week’s episode? We did and we recapped it here for you!

On last week’s show in the continuation of a dramatic elimination round, Chef Ramsay made an announcement that changed the competition for good. Later, Chef Ramsay announced that HELL’S KITCHEN would be hosting a very intimate dinner for distinguished members of the United States Army. Then, in another dinner service – one team faltered and found itself in a confrontational elimination round.  By the end of service the blue team lost and Michael was sent home.

On tonight’s show the remaining eight chefs take a spin to determine which type of international cuisine they will cook in a challenge that will test their ability to create an exquisite ethnic dish using only select ingredients. The winning team earns a shopping spree and private lunch, while the losing team must restock wine and prep the bar for dinner service. Later, one team falls behind even before dinner service begins, and the other team’s strongest competitor makes shocking mistakes that put Chef Ramsay over the edge, forcing him to send both teams out of the kitchen. After the worst dinner service in HELL’S KITCHEN history, each team must nominate their weakest chef in another explosive elimination round.

Tonight’s episode are going to be another drama packed ones, which you won’t want to miss. So be sure to tune in for our live coverage of FOX’s Hell Kitchen Season 11 “8 Chef’s compete” — tonight at 8PM EST!  Find out whose dreams of winning HELL’S KITCHEN might go up in flames.

RECAP: Tonight’s show begins with one of the ladies on the red team moving over to help out the guys. Nedra gets to go but lays down the law telling the guys that she’s not doing any punishment so they betterget it together. This week’s first challenge has the remaining chef’s preparing food from a country that they land on while spinning a big wheel. Jon and Mary get Indian food. Nedra and Janel land on Thai food and Susan and Zack get Japanese cuisine. Each has 45 minutes to create a stunning and delicious ethnic dish.

Helping to judge the creations is Rachel Ray’s sidekick. Mary is up first and they love her dish. John’s dish is also well-received and he gets the point. Thai cuisine is up next and Janel gets the point over Nedra. Cyndi’s greek dish is delicious while Anthony’s plum ruined his dish. Red team gets the point. They loved Susan’s Japanese dish and if Zack doesn’t win this point the ladies win yet another challenge. Zack absolutely ruined the Japanese vibe and his chicken is dry and more Chinese than Japanese. Needless to saw the ladies win again.

The ladies get a $2000 shopping spree and lunch at Mr. Chow’s. Needless to saw, Nedra is beyond pissed off. The blue team gets to prep for the evening’s dinner service and that includes carrying cases of wine inside. Nedra is clearly not pulling her weight on this task.

When the ladies return and the doors to Hell’s Kitchen are ready to open everyone is ready to go except for Nedra.

Right off the bat Nedra seems to be struggling. Her risotto is too salty and the blue team is in over their heads already. The red kitchen isn’t as rough until Janel completely screws up the scallops.

The blue team ultimately screws up so badly that Chef Ramsey throws them all out of the kitchen and that is causing the ladies to step up, except for the moment when Janel screws up the sushi. Now the entire red team is also thrown out of the kitchen. Everyone is called downstairs and told that each team needs to put someone up for elimination. Janel insists that this one dinner service does not make her the weakest link and that she’s not going to leave without a fight. Over on the blue team Nedra is clearly the weakest link and she flips out so bad that they guys actually tell her that they aren’t afraid of her.

When it comes down to the very end Nedra ends up going home. Tune in next week for more Hell’s Kitchen.