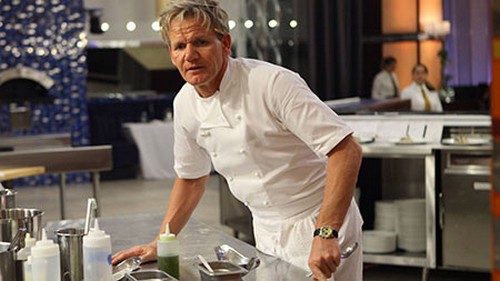 Tonight on FOX our favorite Chef Gordon Ramsey returns with a new episode of HELL’S KITCHEN called, “5 Chefs Compete Part 3.” On tonight’s show one chef’s move to control the kitchen pushes Gordon to do something he’s never done before.  The final five chefs compete to create gourmet burgers.  Did you watch last week’s episode? We did and we recapped it here for you!

On last week’s show the challenges didn’t stop now that the chefs had received their black jackets, as Chef Ramsay surprised them by bringing back a team of previous HELL’S KITCHEN winners to challenge them at dinner service. Ramsay let the teams design their own menus for dinner service and the finalists went head-to-head with the returning champs.

On tonight’s show the final five chefs must prove that they deserve to stay in the competition by creating their most impressive gourmet burger. They face a tough room of critics as Chef Ramsay and room filled with dining professionals will determine the best and the worst burgers. The winning chef earns a relaxing day at the spa, while the remaining chefs are tasked with endless chores. Later, pressure mounts when the chefs must serve a VIP guest, but huge missteps in the kitchen put dinner service at a virtual standstill. Find out which contestant is sent home after a dramatic elimination round.

Tonight’s episode are going to be another drama packed ones, which you won’t want to miss. So be sure to tune in for our live coverage of FOX’s Hell Kitchen Season 11 “5 Chefs Compete Part 3” tonight at 8PM EST!  Find out whose dreams of winning HELL’S KITCHEN might go up in flames.

After last week’s reprieve the contestants know someone has to go home tonight. In front of Chef Ramsey, both Cyndi and Susan had proclaimed Mary as of the weakest chefs. Later she was hurt because she felt she’s come a long way from where she started. Cyndi defends her choice by saying Chef Ramsey is looking for consistency and not most improved.

In their next challenge each contestant has to create a gourmet burger. John Philippe and large group of especially handpicked culinary experts are going to judge the contest. The contestants have only thirty minutes to send out burgers to a packed restaurant. Susan’s burger comes in last place. In first place is Jon’s burger. As a reward Jon gets to have a spa day and he gets to take one of the girls. He chose Cyndi.

The other girls have a touched the floor length list of chores to do given to them by John Philippe. No one likes chores but Ja’Nel has taken it upon herself to be the supervisor. Having her constantly look over their shoulder has really pushed Mary and Susan’s buttons.

For tonight dinner service, the five contestants will be serving the entire restaurant. Everyone starts off strong until a surprise diner comes in. Antonio Sabato Jr. With a V.I.P in the house nothing can go wrong.

Ja’Nel messed up her risotto. Chef took time to call them on it but the flow of food has slowed down and the diners are getting restless. Luckily Ja’Nel picks back up her speed.

Mary begins to mess up her sliders station. She forgot at one point to put any meat in one of the mini-burgers. Then she began to undercook the meat. With Susan’s help, her sliders are doing better. However once they get to entrees, Mary and Susan remain the weakest link. Susan burned the garnish and Mary burned the fish.

Even more problems crop up when Susan starts to announce the dishes. Not only did she try to do Ramsey’s job but she did it wrongly by skipping over what came first. Chef is so angry that he leaves the kitchen and tells Susan she now has his job.

The kitchen still pulls off, with Chef returning towards the end, but Chef does tell them it was the worse he’s seen them.

When they’re left alone it gets to be too much. Ja’Nel was being backed against the wall for her risotto so she came out with her own choice for weakest chef, Susan. The two girls get in an argument over who was better and none of the other contestant is willing to diffuse the situation.

Mary, Susan, and Ja’Nel are called forward in front of Chef Ramsey because they couldn’t decide between Susan and Ja’Nel. Chef sends Susan home.