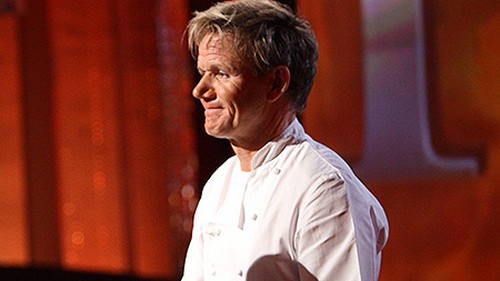 Tonight on FOX our favorite Chef Gordon Ramsey returns with a new episode of HELL’S KITCHEN called, “Season Finale.” On tonight’s show the final two chefs compete for the HELL’S KITCHEN title and a life-changing prize.. Did you watch last week’s episode? We did and we recapped it here for you!

On last week’s show the final five chefs had to  prove that they deserved to stay in the competition by creating their most impressive gourmet burger. They faced a tough room of critics as Chef Ramsay and room filled with dining professionals will determine the best and the worst burgers. The winning chef earns a relaxing day at the spa, while the remaining chefs were tasked with endless chores. Later, pressure mounted when the chefs had to serve a VIP guest, but huge missteps in the kitchen put dinner service at a virtual standstill.

On tonight’s show Chef Ramsay announces the final two chefs who will compete for the HELL’S KITCHEN title and a life-changing grand prize: a Head Chef position under Executive Chef Jeremy Berlin at Gordon Ramsay Pub & Grill at Caesars Palace. After Chef Ramsay surprises the chefs with a luxurious trip to Las Vegas, the adventures continue when the chefs compete head-to-head in a live cooking challenge judged by some of the most famous chefs in Los Angeles.

With the help of former HELL’S KITCHEN contestants, the top two chefs prepare their menus for the most important dinner service of their life. Later, pressure mounts on both teams to execute a flawless dinner service, but in the end, only one chef will be crowned HELL’S KITCHEN winner.

Tonight’s episode are going to be another drama packed ones, which you won’t want to miss. So be sure to tune in for our live coverage of FOX’s Hell Kitchen Season 11 “Season Finale” tonight at 8PM EST!  Find out whose dreams of winning HELL’S KITCHEN might go up in flames.

Ja’Nel and Mary are in the final two. Jon just couldn’t survive the curse of the blue team. With the final two chosen Chef Ramsey takes the two women to Las Vegas. Its time one of them becomes prepared for her future surroundings.

Their first challenge is creating menu with their designated sous chef. While working however they get a surprise from a “roman” soldier. The soldier takes them to Chef Ramsey where they’re introduce to the hotel president and hopefully a future boss. Afterwards they get to see Chef Ramsey’s restaurant and meet last season winner, Christina. The ladies are able to get ideas from her as well as advice before they officially get their chef jackets.

The surprises aren’t over yet. Mary and Ja’Nel are back in their hotel when they get the call they have to make another overnight trip. They arrive at what appears to be a train station and it’s there they get to see their families. Seeing the family is all well and good but now the ladies are confused over whether their family is traveling with them back to Vegas.

They’re not. The “train” station is the final challenge before a live audience. They each have to cook five dishes in an hour. Out of what they cooked: Mary won 2 dishes and Ja’Nel won 3 dishes. Ja’Nel wins the challenge. Because of that she get to choose her team first for her team out of all of the returning chefs.

As added surprise they two women are allowed to tade anyone from their team. Mary wants to trade Dan but Ja’Nel is refusing to take him. They don’t end up trading anyone. Although once their back with their teams they want to trade someone more than ever. Dan is already ignoring Mary and Ja’Nel’s team wants to give their opinion on everything. Ja’Nel changes her mind on trading but she doesn’t like to have her decisions questioned.

They have to prepare sample dishes for Chef Ramsey and everyone is in the kitchen doing theire best except for Dan. He claims he simply doesn’t like Mary’s voice and yet he proves to be the weakest link. At one point he figures its best to just walk right out of the kitchen. He does come back only after convincing himself that he’s too good to be defeated by Mary.

The sample testing goes well for both women. Chef loves all of their meals. Tonight the there are two chef tables filled with celebrities.
Nedra proves to be the weakest link in Mary’s kitchen. Even Chef Ramsey wants Mary to go hard on her. Mary actually threatens to kick Nedra out and Nedra manages to up her game. Minus the odd hiccup the two chefs are doing better. That is until Dan. He can’t seem to deliver warm meat and Mary has no choice but to kick him out. Nedra has to take over his station but Dan had overcooked all of the steaks.

Luckily Nedra is able to find a good one.

Ja’Nel had some problems with Susan but Susan is able to do well. The main problem in her kitchen is that the cooks aren’t working together. Her food flows and then abruptly stops. Ja’Nel tries to give them orders and at best they can’t hear her. At worst they’re simply ignoring her. She does grab their attention eventually and the meals are back on track.

Dinner is over. Chef has nothing but praise for the both of them. Now it’s time to choose his chef. The two are nervous but what can they do. Chef Ramsey picked Ja’Nel. She’s the Hell’s Kitchen Winner.