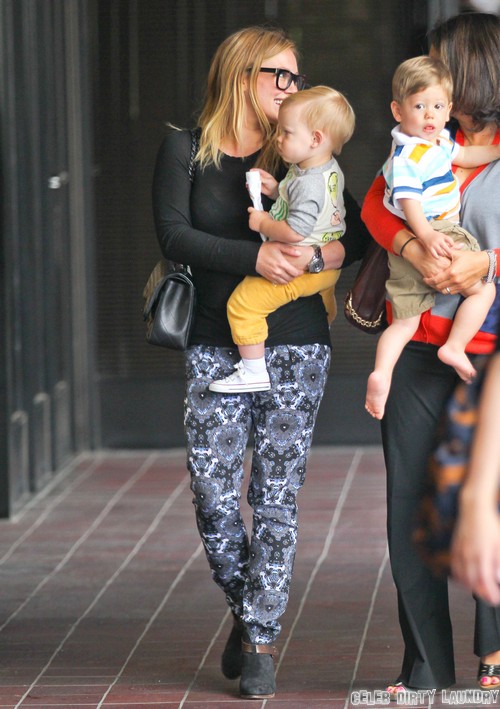 Hilary Duff isn’t your typical Hollywood mom. She doesn’t talk about parenting as if it’s all rainbows and chirping birds. She freely admits that while she is happier than ever, she’s also completely exhausted and does everything- including her makeup – while holding her son. Hilary also didn’t rush to drop the baby weight. According to the May 27th print edition of In Touch, the actress/singer decided not to go to the gym for 2 hours a day and focused on her baby instead.

Now a year after having Luca, Hilary is back in her pre-baby clothes and is glad that she took her time getting there. She refers to herself as “normal” and would rather enjoy those carbs on a night out rather than be starving and cranky. She has a lot to be happy about these days. The scripts are rolling in again and she’s back in the studio working on new music. The one thing that isn’t in the cards for Hilary right now is baby number two, as she wants to enjoy her little family just as it is for now.

Hilary also tweeted a cryptic “X” earlier this week that led to speculation about her being in the running for one of the judge/mentor spots that’s up for grans on X Factor. That’s a career move that would make a lot of sense at this point for Hilary. Plus she has been in the business since doing her first Disney flick when she was in grade school. She’s a triple threat but is also balanced in how she has handled her career so she would have tons of wisdom to pass on. She’s surely one of the most balanced stars to emerge from the Disney machine in recent years.

Would you like to see Hilary back on television each week? Tell us your thoughts in the comments below!