Hillary Clinton Can’t Stand Angelina Jolie: Thinks She is a Fake and a Flirt – Report

Angelina Jolie may be a U.N. Goodwill Ambassador but that doesn’t mean that she has the respect of everyone, especially not that of real politicians and diplomats. Hillary Clinton is just one of many Washington powerhouses that really can’t stand Angie’s tactics. Good ol’ Hil believes that it takes more to champion people’s rights than a stop here or there with supplies that also ends up being a good photo op. Hillary thinks that Angie’s approach is pathetic and as it turns out, there has been bad blood between the two for years.

According to the Oct. 21st print edition of National Enquirer, Angie first ticked Hillary off years ago by talking about wanting to seduce her husband, Bill Clinton. Back in 2007 Angie attended a meeting for Bill’s foundation and caught his eye. Hillary believes that Angie encouraged her husband’s lustful eye and she has had no use for the woman since then. At one point Angie asked to meet with Hillary, who simply laughed off the idea. She has made it clear that she believes Angie to be a fake homewrecker – someone with whom she simply doesn’t want to be aligned!

Do you think that Angie’s charity work is done for the right reasons or is it simply to promote a better image for herself? I mean on the one hand there is wild child Angie who used to drink blood, do drugs and screw everyone. Then on the other side you have the actress trying to appear almost saint-like, adopting children from all over the place and rallying various women’s causes. Which is the real deal? Tell us your thoughts in the comments below! 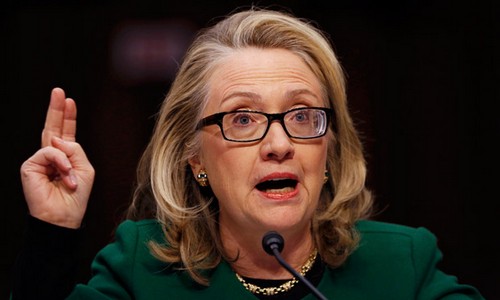