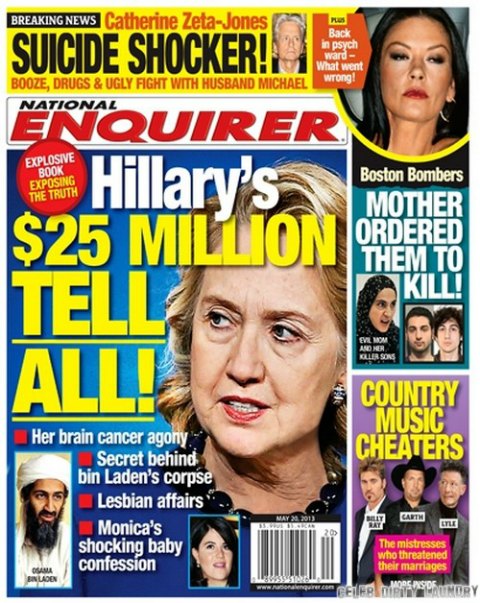 Former First Lady turned Secretary Of State Hillary Clinton is featured on the cover of the latest issue of the National Enquirer. What exactly is being revealed?!? Is Hillary a closeted lesbian? That wouldn’t shock us, actually. We have always kind of suspected that Hillary was batting for the same team.

She stood by her man as he battled allegations of sex with Monica Lewinsky. Slick Willie was said to be banging Monica for the better part of two years, but apparently that didn’t phase Hillary at all. If she were really a lesbian, it would all make total sense, wouldn’t it?

The tabloid also claims that Hillary is suffering from some sort of brain cancer agony. In addition, she has secrets on Bin Laden’s corpse. There are lesbian affairs and of course, Monica’s shocking baby confession!

Did Bill Clinton get Monica Lewinsky pregnant after he claimed to not have had sexual relations “with that woman”? Is Hillary a lesbian, in secret? All of these questions and more will be answered in the pages of the National Enquirer!