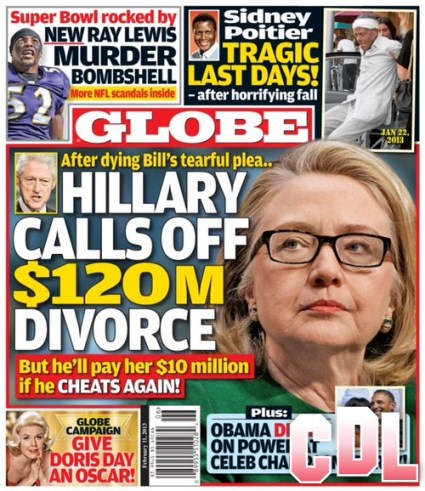 GLOBE reports on this week’s cover that Hillary Clinton has agreed to call off her $120 Million divorce from former President Bill Clinton.  According to GLOBE Hillary agreed to suspend her pursuit of legal freedom from Bill after much tearful pleading on the part of the former world leader.  Furthermore, Hillary only agreed to remain married to Slick Willy under a very unusual condition: that he must pay her $10 million if he cheats again!  Could Hillary’s recent stroke have affected her decision? How Hillary intends to keep tabs on old Bill will be revealed in the February 11th print edition of GLOBE.  Perhaps given Bill’s serious heart disease Hillary can stop worrying about his infidelity.

In the current edition of GLOBE we will learn in a Ray Lewis murder bombshell hitherto unreported details.  Apparently this inside story and other NFL scandals will rock the Super Bowl!  Hopefully Beyonce’s anticipated lip-syncing during the half-time show won’t be the highlight of the day.  The hype surrounding the Super Bowl mystifies me – I don’t understand what is the big deal.  Who cares about the result of a game played by mutli-millionaires on juice hired to represent a business?  What am I missing?

GLOBE reports that Sidney Poitier is rumored to be in bad shape after suffering a serious fall recently.  We hope the classic Hollywood star makes a full recovery.  Of course Sidney is 85 and at that age it is not easy to recover.

Doris Day deserves an Oscar and GLOBE is running an ambitious campaign to see that she gets one.  This weekend we will provide all the details on how you can get involved in GLOBE’s campaign to get Doris the recognition from the Academy of Motion Picture Arts and Sciences that she deserves.

I’m looking forward to reading my GLOBE this week.  Once I sit down with my copy the time just flies as I explore fascinating news and pictures.  My week isn’t complete without my copy of GLOBE.