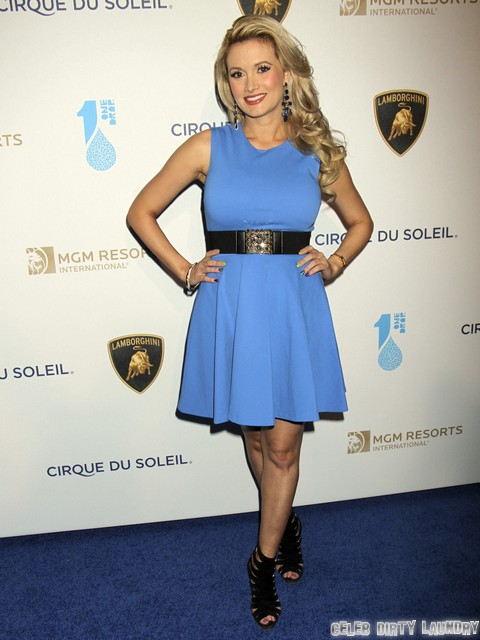 Holly Madison is one hot mommy! A few weeks after the birth of her first child Rainbow Aurora the former Girl Next Door attended Cirque Du Soleil’s One Drop Gala in Las Vegas. She looked gorgeous without an ounce of baby weight on her body.

When someone like Holly (real name Holly Sue Cullen) bounces back quick from their pregnancy people start to wonder if she did not carry her baby and use a surrogate mother.  I believe this was a real pregnancy.  In case you were wondering per her blog Holly named her daughter Rainbow after a high school friend with that name.

Radar Online published pictures of Holly baring her pregnant belly on January 8. I know some of you are conspiracy theorists, but I don’t see any seams or gaps where a baby belly would have been added on to her midsection. I also checked out photos from In Touch. Again, nothing looked suspicious. When Holly moved around and sat in a chair her baby belly did not deflate (I’m talking to you Beyoncé). You can clearly see that Holly put on weight in different parts of her body, not just her mid section. If she truly was wearing a strap on belly you would only see weight gain where the baby would be positioned.

Holly had a plan for her after baby body while she was still pregnant. On February 27 Holly wrote on her blog “This might sound gross, but I’m totally planning on having my placenta turned into pills I can take after giving birth. I heard it helps women recover faster, and I want to recover as quickly as I can!” Her plan obviously worked! I admire Holly for finding a safe way to get her body back.  If you think about how Holly takes care of her body in general coupled with the placenta pills it makes sense she shed the baby weight quickly. Holly has said in the past she hates exercise and always counted calories to stay slim. She also doesn’t starve herself. If you saw Holly on Girls Next Door you saw her eating all the time, and not one complaint about having to take supplements or eat only certain foods to maintain her figure.  Breast feeding burns a lot of calories so this could also contribute to Holly’s quick recovery.

Keep up the good work, Holly! More new moms should follow your example.