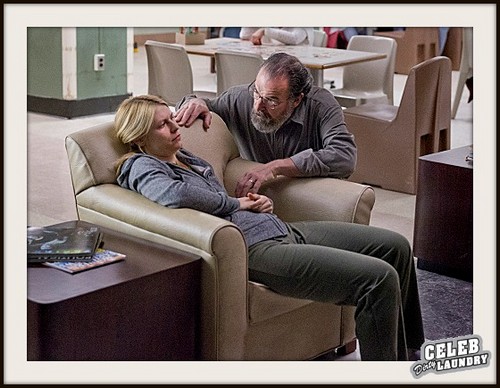 Tonight on Showtime their Emmy Award winning drama series, HOMELAND continues with a new episode.  On tonight’s show called, “Uh… Oh… Ah…,” the Brody family turns to therapy.. Did you watch last week’s season premiere?  If you want to get caught up before tonight’s episode,  you can read a full and detailed recap right here.

On last week’s season premiere Carrie was a lot closer to the Carrie we saw at the beginning of Season 1 – in other words, not too stable. There was also some major emotional moments that went down between Carrie and Saul, and they packed a wallop.  Brody was still on the run.

On tonight’s show an embattled Carrie learns who is really on her side, and Saul attempts to track down those responsible for the Langley attack.  Carrie tries to convince everyone that she is the only one who is getting it right.  She tells everyone that Brody was not responsible for the explosion at Langley.  No one wants to believe her.  Saul wants to rein Carrie in because she is making herself a target.

Tonight’s episode is going to be another action packed one, which you won’t want to miss. So be sure to tune in for our live coverage of Showtimes’ Homeland Season 3 episode 2 — tonight at 10PM EST! While you wait for our recap, hit the comments and let us know how excited you are about the return of Homeland tonight.  Check out the sneak peek video below!

RECAP: Carrie storms into Saul’s house, she wants to speak to him but finds out that he has early morning meetings. Mira tells Carrie that Saul told him about the incident at the restaurant, Carrie tells her that wasn’t upsetting, what was upsetting was when Saul sold her down the river.

Dana is with her mom, they are in the therapists’ office and she tells him her dad a terrible thing and by comparison her trying to commit suicide is nothing. They start talking on how her mom remodeled the bathroom and she says that she did it because she couldn’t get the blood out. When leaving the therapists’ office, Dana sees the both she has liked from therapy.

Carrie is in the hospital and she tells the doctor that this is completely unnecessary. The doctor says that her file states that she stopped taking her meds. Carrie goes on to say that she stopped her meds because it makes her fail to see and she cannot have that happen. Carrie then tells him that her sister is a doctor and she will tell him that everything that she has said is true.

The analyst tells Saul she can’t find anything, he tells her off because she is wearing the head dress and tells her it would be a major f*ck you to her potential coworkers given the case they are working on.

Dana doesn’t want to eat dinner and Jessica doesn’t understand why not, Chris tells Jessica to just back down. Dana goes to the bathroom and starts to run the bathwater.

Quinn goes to see Carrie and tells her he can’t get her out, then he tells her that she can’t go around spilling agency secrets. Carrie is pissed, she says that Saul blamed her. Quinn tells Carrie that she has to be careful, there are things she doesn’t even know about and she is going to get herself hurt. Carrie asks Quinn if Saul sent him to see her, he says no and they she scream for him to leave.

Jessica finds out that Dana is missing, she ran the bath water and then sneaked out of the house. Dana runs to her new boyfriends arms and tells him that she just really needed to see him.

Carrie’s dad and sister are looking for stuff to bring to the hearing to help her, then Saul is at the door. Frank is pissed that Saul is at the door, Saul says he understands that they are angry and knows they hate him right now, but he is on her side. Saul says Carrie ran to a reporter, she is making herself a target, there are people who want her indicted on criminal charges. Saul begs the two to help him.

Dana goes from attempting suicide to sleeping with her new boyfriend and staying away all night.

Carrie is at the hearing, Quinn is there as a character witness. Maggie and Frank arrive and Maggie tells her she wants to talk to her about her medication. Carrie gets really upset and soon finds out that Saul went to visit Frank and Maggie. Carrie is furious that the two would believe that Saul is worried about her. She tells them that Saul pretended to be her friend and he is no different than the two of them.

The judge walks in and Carrie storms out, she screams that it is a f*cking sham and then has to be physically stopped from trying to leave.

Saul is in an important meeting with the new analyst, Quinn walks in and they are in the middle of a conversation with the bankers who had the funds flow through their bank; the bankers get up to leave.

Jessica goes to pick up Dana and tells her she spent with a guy who is unstable and it is not what she needs right now. They get home and Chris tells Jessica that it is ok, she says how can it be ok when her daughter runs to the nut house. Dana brings Jessica to the bathroom and tells her that she wanted to die and now she wants to be alive, the reason for that is Leo. Dana says that she is not going to kill herself and she is not going to have anybody tell her what to do.

Quinn is alone with Saul and tells him that Carrie got brought off kicking and screaming and they did that to her and he is not ok with that. Saul says that it was a rough week and he is aware and if the outcome is what he thinks it is going to be, it will all be worth it. Quinn says that when this is all said and done is out. Saul says it was a mistake what happened to the child, Quinn says he knows it was his fault but he doesn’t understand what the hell is going on now.

Quinn meets one of the bankers out of a restaurant and tells him that his colleague and son were gunned down and he hopes that it won’t be repeated. Quinn tells him to give up the information he is covering up else he won’t be responsible for what could happen.

The banker cooperates and both Saul and the analyst are surprised.

Carrie is in a bed strapped down and she is forced her meds through intravenous.

Dana is looking at family pictures, she starts rooting through more stuff and finds her fathers prayer mat; she gets down on her hands and knees.

Saul goes to see Carrie and finds her in a chair completely drugged up, he tells her that he is sorry. Carrie manages to tell him to f*ck off, then she turns her head.