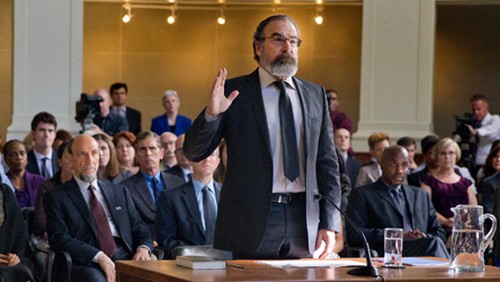 Tonight on Showtime their Emmy Award winning drama series, HOMELAND returns with its third season premiere.  On tonight’s show called, “Tin Man Is Down,” Brody remains at large. Saul plots a counterstrike. Did you watch last season’s finale?  If you want to get caught up before tonight’s episode,  you can read a full and detailed recap right here.

On the season finale when we last left off, Brody was going on the run and Carrie was helping him. The CIA had been bombed, and a LOT of major characters died. Saul, thankfully, did not – but he is now the acting head of the CIA, a job he clearly does not want.

If this is the first time you have watched the outstanding show is about Marine Sergeant Nicholas Brody is both a decorated hero and a serious threat.CIA officer Carrie Mathison is tops in her field despite being bipolar. The delicate dance these two complex characters perform, built on lies, suspicion, and desire, is at the heart of this gripping, emotional thriller in which nothing short of the fate of our nation is at stake.

On tonight’s show Carrie is a lot closer to the Carrie we saw at the beginning of Season 1 – in other words, not too stable. There’s also some major emotional moments that go down between Carrie and Saul, and they pack a wallop.  Brody is still on the run.

We managed to see an advance copy of tonight’s show and have spoiled it for you.  So if you want to see what happens, [CLICK HERE]

Tonight’s episode is going to be another action packed one, which you won’t want to miss. So be sure to tune in for our live coverage of Showtimes’ Homeland Season 3 premiere — tonight at 10PM EST! While you wait for our recap, hit the comments and let us know how excited you are about the return of Homeland tonight.  Check out the sneak peek video below!

RECAP: We see Peter Quinn making a bomb. Carrie is in court and gets sworn in, it’s hearing behind close doors for her safety, it’s 58 days since the attack that killed 219 people and this committee is trying to get to the bottom of it. The agency is crippled, their reputations shattered and they need to get to the bottom of this. Carrie starts asking questions about who she is, then why she left the agency. Carrie admits she was fired for taking classified documents but rehired to expose Abu Nazir. She explains that it was her responsibility to try to figure out Nazir’s next move.

Saul arrives at the bureau and he really wants to be there for Carrie.

Carrie then gets asked when she first met Brodie. Carrie finds out that Brodie a deal with the CIA that he had immunity if he helped them to get Nazir; Carrie is surprised. Carrie is then asked when did the CIA know that Brodie was a bad guy. Carrie says that she doesn’t think that Brodie killed all those people if that it is where they are leading to.

Carrie calls Saul and tells him that someone leaked the memorandum to the committee, she is really upset.

Dana has her last day of therapy and she says that she is going to take one day at a time, ask for help if she needs it. Jessica finds out that Dana is doing well, but she wants to know what she has to do to watch her because after all, she slit her wrists. Jessica is given some information to help her cope with Dana once she takes her home. Jessica looks outside the window and she sees Dana and cozy with a guy, later the two are kissing in a corner. Dana finds out that her mom is there, she gives this guy a last kiss and he tells her to call him.

Jessica and Dana leave the facility and all the reporters are outside and want to know if they have any information on where Brody is.

Saul is at work, he wants to know what they have. The National Security Adviser tells him that the President wants closure for the America people and Saul is told that the way to do that is get Brody. Although, there is a new guy there are after, Javadi, who has been tied to some terrorist activities.

Carrie is home and her father confronts her about being off her lithium. Carrie tells him that she feels good, so it is ok.  Carrie tells her father that she blames her meds for the 219 people that died, it was right in front of her eyes and she didn’t see anything.

Dana is home with her mom, Dana gives her grandmother and brother a hug. Dana is surprised to find that her mother got the bathroom redone, she tells her it’s nice. Dana then heads into her room and looks around. Dana picks up a picture of the family, looks at it, then puts it in a drawer. Dana takes off her top and bra, then she snaps a nude photo of herself.

Saul is at home, he talks about what is happening at the bureau with Mira; she stops him and tells him to follow her upstairs so they can get some sleep. Mira tells Saul that it has been two months since she left for Mumbai and they are still sleeping in separate bedrooms. Mira goes over to Saul and kisses him on the forehead, then he lets her leave the room.

Carrie is back in from of the committee, she is late. There are fourteen hours that the chairman thinks Carrie has not accounted for. The chairman tells Carrie’s counsel that their are witnesses that saw Carrie leave the scene of the crime when she said she was passed out in the ladies room. The chairman tells Carrie that he knows that she and her colleagues are hiding something and one day he is going to put them all in jail.

Quinn is on his motorcycle, he is watching an armed car, then he follows it. At a stop light, Quinn goes to activate a bomb but when the window opens to the vehicle, he realizes that there is a kid inside and deactivates the bomb.

Saul gives the go ahead to start the mission; the kill teams are all in position. They have five out of the six targets and Saul wants to stand down, he wants all or nothing. Saul says they have ten minutes to find all six or it’s over.

Quinn is now at a large guarded home and once over the gate, he activates his bomb and it lets off a small explosion. Quinn is inside the house, looking around. As Quinn is leaving the house, he is really upset to find out that the kid was shot and killed in the house.

Quinn got his man and end the encrypted message “Tin Man is down” which then dominoes the other five to be taken down; all six are down.

Carrie it out shopping while Dana is having dinner with the family. Jessica talks about her job interviews that she went to; the kids think it is cool that she wants to work, while her mother doesn’t want her to work. The conversation gets awkward and Dan tells a joke to try to lighten things up.

Carrie is at home, she is having sex on the stairs with the guy that she met in the grocery store. Later, Carrie is in bed alone and gets a call from her dad that tells her about a story on the front page of the newspaper, CIA agent linked to potential bomber that killed 219 people”.

Carrie walks in to a restaurant where Saul is and she is pissed about the story in the newspaper, she tells Saul that she thinks he planted it. Saul thinks Dar put the story in the paper and tells him that Carrie has a right to be pissed.

Dana gets a text photo from the guy she met in the center and he is also naked from the waist up.

Saul is now called in front of the committee, he has a statement that he would like to read. He tells them that two months ago, in the worst attack since 911, yesterday they took a step to eliminate the terrorist network who were responsible. Saul goes on to congratulate the people involved who carried out the mission. The chairman tells Saul that he went after the easier targets and tells him that frankly he feels that the whole thing feels convenient. The chairman asks him if he comment on the article in yesterday’s paper and Saul tells him that he will not comment on unfounded reports. Saul then says that the agent involved is bi-polar, a condition that she hid for years. The chairman then asks if she concealed the fact that he was sleeping with Brody, Saul says yes she did.