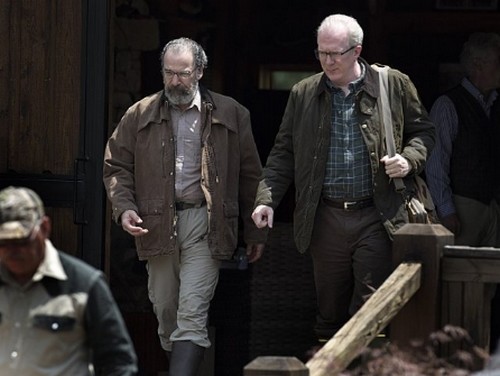 Tonight’s episode of HOMELAND was and intense episode and my favorite so far.  Good news, we have managed to get our hands on a sneak peek video and a few spoilers to whet your appetite as you wait  for next week’s episode 5 “The Yoga Play.”

On tonight’s episode Dana goes AWOL, forcing Jessica to call the police. Carrie gets busted out of the institution.  Carrie has a meeting and in her current state of mind you can only imagine how that was. Carrie’s saviors are from Iran and they want to recruit her.  They explain to Carrie that she is a liability, she finally signs on the dotted line.  Don’t worry fans, she goes to see Saul and tells him she is in.  So it seems Carrie and Saul were working together.  Virgil makes a reappearance, and you know that Carrie will probably be involved with him.  Did you see tonight’s episode, a lot more happened.  We have a full and detailed recap, right here for you.

Spoiler alert: If you’re one of those people who doesn’t like spoilers, stop reading now! We have some juicy spoilers for you about the season 3 episode 4 of Showtimes’ “Homeland”

Official AMC synopsis of next week’s episode: Carrie puts her mission on the line.  Saul rubs elbows with his adversary.

On next week’s show it is going to be a crazy one so hold on to your seat and get ready.  Carrie is out and she is on a mission and watch out anyone who gets in her way.  Check out the video below for a peek at the action.

Homeland season 3 episode 5, “The Yoga Play”  airs on Showtime on October 27th, 2013. Check out the preview video below and some photos of season 3 episode 5 and let us know in the comments below what you think!  Are you enjoying season 3 of Homeland?